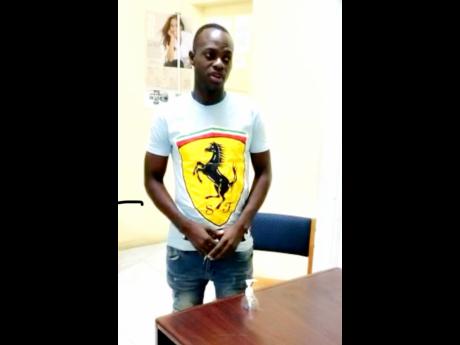 Screen shot
Screenshot of Shaquille Higgins being asked to apologise at the Moneague Police Station. Higgins was arrested, and later released, by the police after a video surfaced of him uttering expletives at Prime Minister Andrew Holness for imposing stricter COVID-19-containment measures.

First of all, the guy, one citizen Higgins, pictured in the video which by now everybody has watched, cussing out the prime minister, was completely out of order. If he were younger and came from country, his granny woulda hold him down and wash out his mouth with red carbolic soap at the standpipe. A punishment and public embarrassment never to be forgotten through life.

No matter how his party plans are ‘spowyle’ by Andrew’s reverse ‘back-backing’ into early curfews, cursing like he did is pointless and nasty. Decent people should have no patience with that. It is time to take a stand against coarseness and disrespect. Not just to the prime minister, but yes, to him especially. No matter how we disagree with him, his office and his persona deserve everyone’s regard – even if you are really vex and your vocabulary does not exceed 150 words.

That said, what the police did was completely out of order. Invading the man’s space, videoing him putting on his clothes and then forcing him to apologise, as dictated, in obvious fear of arrest and/or a buss arse; then imprisoning him on patently fabricated ‘suspicion’ is the worst instance, among countless others, of how often law is used to advance injustice in this country.

All of us need to have a clear focus on this, because it is we same ones who will have to pay the substantial damages, which are likely to be awarded, when the false arrest and imprisonment torts are adjudicated many years from now.

Although he is in hot water now, the policeman in charge of that operation no doubt thinks he did a righteous deed. After all, di bwoy diss the boss, Brogad himself. Many people will agree. The sergeant probably got a call from someone higher up who had seen the video. If you have morals and an eye to promotion, you can’t allow such renk behaviour to happen in your police division, can you?

Look here, law is a very blunt instrument, and its application is far from even or uniformly just. Not everything that ought not to happen is appropriate to be a criminal offence. Serious breach of the peace could qualify. Cussing bad word really does not.

The problem is that teaching acceptable standards of behaviour to which people are likely to adhere even under pressure, is largely ignored in Jamaican society. In our mad and understandable dash away from stifling colonial standards of conformity, so represented by the 19th-century bad-word law which Mr Higgins breached, we have so far failed to substitute canons of respectful and humane behaviour.

It’s the same with the beating-of-children issue. Most are appalled at the cruelty but don’t really know of effective options when you have to deal with really ‘outa-order, hard-ears’ pickney.

Please don’t look to the political parties to prescribe in this area of life despite last week’s event, whereby some quasi-extreme platform speech was called out, regretted and apologies accepted, all in four days! That’s a good sign.

For me, the worst aspect of the St Ann incident was the police force spokespersons who advanced what they must have known to be a cock-and-bull story to justify the man’s arrest. Terrible, and likely irreparable, damage is done when ordinary people become prone to disbelieve what officers of the law put forward as truth. Police mustn’t be thought of as liars.

Equally dangerous is the utter frustration of those of us who look to law, civil or criminal, for redress and are disappointed by delays and humbug. All of us should tek sleep mark death at lawyer Ernie Smith’s true remark about the Ruel Reid case recently. He said, “We could be here 10 years from now!”That is not due process but it’s opposite: unfair to the accused and to the public interest as well. Inadequate and obsolete systems often render the process of justice itself unjust.

And when that happens, when the system doesn’t work despite all the ‘Oyez’, God Save the Queen, and the wig and gown, people get rhatid and do extreme things. In a real sense, that’s what happened with both Higgins and the police last week.

Don’t you agree that in this ‘Emancipendence’ season it’s appropriate to plan a big culture shift in how we administer justice? As is our wont, too much big talk and little or no substantial change. Big national security money being spent in the wrong directions!

WHAT KIND OF SCHOOL KEEPING IN SEPTEMBER?

I believe the Government really wants face-to-face schooling to resume in September. They realise now how dread the fall-back in learning and discipline has been for most students. This after the big pretence that remote learning was really keeping and that with some more extra lessons, tough-head pickney will catch up.

Hey! You know that is foolishness. Time to talk the raw truth to ourselves. Self-delusion is a serious form of madness. All of our children, even the most privileged, are suffering and it would be criminally negligent not to stop it.

So the plan has to be that on September morning, there must be a way that every child can resume face-to-face learning, even on a rotational basis. Enter the issue of the cooperation of teachers, some of whom are hitching about returning to the classroom.

Now, the Jamaica Teachers’ Association has reported that about 25 per cent of the nearly 30,000 public-school teachers have been vaccinated up to this point. This leaves over 20,000 eligible to get the injection; plus, let’s say, another 10,000 ancillary and administrative workers. This combined group should have first priority for the batch of vaccines now being administered.

No ifs and buts please. No first-come, first-serve policy which puts school personnel and health workers at the back of the vaccination queue.

Talk truth: that is where some would really want to be. No sah! It is rank selfishness and immorality to refuse the protection which can make our children safer and aid our returning to the classrooms.

I am aware of ongoing teacher-hiring interviews last week, where a question about the applicants’ status and attitude towards vaccination was objected to as being an invasion of privacy. That is nonsense. My right to privacy, my choice not to comply with the best public health advice, cannot be invoked to excuse me from the job I am being paid to do or to present myself in a way that makes others vulnerable.

So I support the prime minister’s appeal to moral suasion as a first measure to encourage teachers and others to vaccinate in August. Those who don’t, without a compelling health excuse, cannot continue to expect pay and secure tenure.

So right now, before the possible chaos of schools reopening with many members of staff absent or unprotected, each school board should be interviewing all employees to determine their status and their attitude towards returning to the classroom.

Parents should be demanding, during August month, that they are brought into the loop of a plan to reopen safely. Please don’t wait on a circular or a Zoom meeting from the ministry.

So much of this important thrust depends on the availability of the vaccine. It is a shame that Jamaica is second to last among Latin American and Caribbean countries in the proportion of citizens who have been vaccinated. Why?

Somebody should explain, but this is not the time to cast blame and cuss, like some of us do as a substitute for helpful action.

Me a beg everyone this Emancipendence: get immunised as soon as you can. Prepare yourself, your community and our children to get back to school in September.

Our future depends on you.