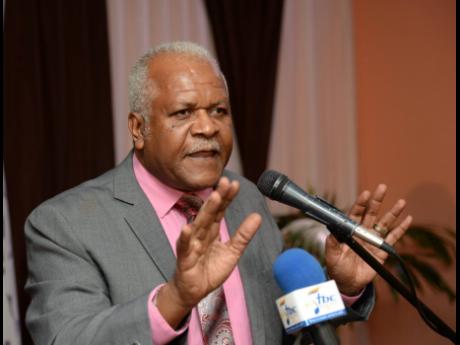 The Reverend Merrick ‘Al’ Miller is set to receive a national honour, Commander of the Order of Distinction, on Heroes’ Day in October this year. According to a Gleaner story, Miller said: “I was a little surprised. A mean, I had to double-check...

The Reverend Merrick 'Al' Miller is set to receive a national honour, Commander of the Order of Distinction, on Heroes' Day in October this year. According to a Gleaner story, Miller said: “I was a little surprised. A mean, I had to double-check wha the person a say, who was calling and if she know wha she a say.” Miller said he was surprised to get the call. To say I was also surprised would be an understatement of the greatest magnitude. The news hit me like a Category 40 hurricane. Al Miller, CD? Seriously?

According to the Jamaica Information Service (JIS) website, “The honour of the Order may be conferred upon any citizen of Jamaica who renders outstanding and important services to Jamaica and upon any distinguished citizen of a country other than Jamaica (an honorary member). The motto of the Order is “Distinction through Service”. So from Negril Point to Morant Point, from Half Moon Point to Portland Point, there could not be found clergy more deserving of this award?

Miller has more question marks beside his name than a transcript of an episode of Schools' Challenge Quiz. The man has not one, but two criminal convictions. The first was for negligence resulting in the loss of his licensed firearm in 2011. It was stolen from his car while he was picking plums from a tree on a school compound in St Andrew. He was fined $80,000. According to Miller, “I don't know what was the issue there because it was stolen and recovered within a couple of weeks, and I was instrumental in the recovery,” he said, arguing that it could have happened to anyone.

But there was an issue. The presiding judge, Lorna Shelly-Williams, said she “outrightly” rejected the unsworn statement Miller made in his defence from the prisoner's dock. She also said that he did not challenge certain statements made by police witnesses and that he failed to mention that he had gone back to his vehicle for a wire that he used to pick plums. The magistrate added that even if she had accepted his unsworn statement, she would still have found him guilty of negligence.

Miller's second conviction was for a far more egregious offence. In July 2016, he was found guilty of attempting to pervert the course of justice and sentenced to a $1 million fine. He was charged in 2010 after Tivoli strongman and alleged drug kingpin Christopher 'Dudus' Coke was apprehended in his sport utility vehicle in St Catherine on June 22 that year. At the time, Coke was the most wanted man in the country and was to be extradited to the United States to face drug charges. The search for him led to the infamous Tivoli Gardens Incursion in which at least 69 civilians and one member of the Jamaica Defence Force were killed.

When Coke was apprehended in the vehicle with Miller, he was wearing a wig and glasses, obviously to disguise his appearance. The photographs of Coke were widely circulated at the time, with the wig clearly perched atop his head. However, when Miller was interrogated at the time and asked, “Was Coke at any time during the trip from St Ann to Kingston wearing a wig?”, Miller replied, “I did not notice a wig, but headgear.”

As in the first trial, the judge, Simone Wolfe-Reece, did not buy Miller's story. Miller insisted that the Jamaican police were aware that he was taking Coke to the US Embassy in St Andrew to surrender. The judge stated that based on the evidence presented by prosecutors, Miller was “less than candid” with his account of what happened on the day Coke was captured, stating, “The evidence supports a finding of fact that he (Miller) was seeking to evade the local authorities.”

As with his first conviction, Miller shows no remorse. In fact, he said: “That was service to country to do what I felt I had to do. There is absolutely no aspect of it, as far as I am concerned, that I did wrong,” adding, “So what I did, I would do it again. I brought no shame to my God and certainly not to my country.”

Miller also had the audacity to compare himself with some of our national heroes, stating, “Were they not convicted and even hung?... And what we must be committed to is the principle of truth and what is right,”

So a man with two criminal convictions (one gun-related and the other involving harbouring a fugitive), showing no remorse for them, whose honesty and integrity were openly questioned by judges in both cases, not only claims to stand up for “truth' and “what is right”, but is being given a national award.

USE RELIGION TO DEFEND

Member of the Cabinet subcommittee, Minister of Tourism Ed Bartlett, like a typical Jamaican politician using religion to defend the indefensible, was quoted as saying, “We are a Christian community… , and Jesus said it clearly, 'he who is without sin, let him cast the first stone',” referring to Jesus' response to the mob in the biblical story after it demanded that an adulterous woman be punished. But Jesus told the woman to “sin no more”. Miller, on the other hand, broke the law twice, did not “repent”, and proudly states that he would re-offend. That is not following “Christian principles”.

This is a national disgrace. The selection of Miller for this award seriously demeans its value. It sends a message to our people, including our youth, that arrogance, dishonesty, blatant disregard for the law of the land and lack of remorse for breaking it are not only acceptable, but worthy of reward.

Who then will be the next recipient? Sha'Carri Richardson? According to the rules, foreigners may be eligible, so … .

Michael Abrahams is an obstetrician and gynaecologist, social commentator, and human-rights advocate. Send feedback to columns@gleanerjm.com and michabe_1999@hotmail.com, or follow him on Twitter @mikeyabrahams.