Editorial | Get a serious discussion on vaccine mandates 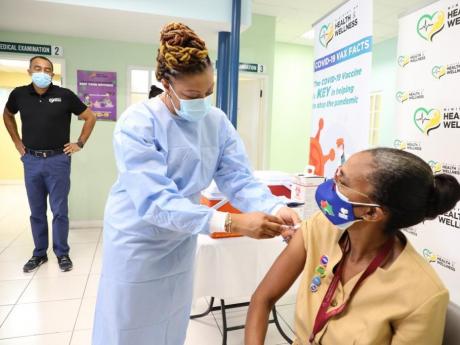 With the private sector’s leadership having now advised firms of their obligations before imposing vaccine edicts, and the Government edging away from its anti-mandate posture, it’s time for a full, robust discussion on what category of Jamaicans may be required to be inoculated against COVID-19 and the circumstances in which the demands may be made.

The debate is urgent, before Jamaica sinks deeper into its public-health crisis and the nascent economic recovery goes totally off the rails, or its social stability is further undermined. The Government, specifically Prime Minister Andrew Holness, has to lead from the front on this matter. The PM must be willing to take risks and expend political capital. The situation is too dire for safe harbours.

The fact – even as hard as we grab at the flickers of seemingly positive news – is that Jamaica remains firmly in the grip of its third wave of the coronavirus epidemic. The island’s hospitals are overburdened with COVID-19 cases; new strains of the virus have found their way to the island; younger people are being infected and dying from the virus; and foreign governments are telling their citizens to stay away from Jamaica. That is a significant threat to the tourism sector, which had begun to stir after last year’s devastation.

The easiest route out of this crisis is to vaccinate sufficient Jamaicans against the virus, so as to achieve so-called herd immunity. The Government’s magic number for this is 65 per cent of the population.

However, only five and a half per cent of Jamaicans are fully inoculated while another 16 1/2 per cent (measured against domestic population data) have had their first shot of a two-dose vaccine.

THERE IS A PROBLEM

Jamaica has sufficient vaccines to have inoculated far more people. But there is a problem: significant and stubborn pockets of anti-vaxxers as well as people who are sceptical about the safety of the vaccines.

Not surprisingly, the situation has triggered a bit of a debate about vaccine mandates, but without fulsome engagement of the issue, despite the education ministry saying vaccinated children (12 and over) will be given priority in the planned restart of in-class school next month, and the constabulary and the army giving preference to vaccinated members in some of their activities.

But, in August, Prime Minister Holness had said his Government was not for mandatory vaccinations, and in fact didn’t believe it was “something that would meet the constitutional test”. Last week, the major private sector bodies – the Jamaica Employers’ Federation, the Private Sector Organisation of Jamaica, the Jamaica Chamber of Commerce and the Jamaica Manufacturers and Exporters Association – joined the trade unions’ umbrella group in saying that they weren’t for edicts, although there may be “specific and extenuating circumstances” where insisting on workers being vaccinated might be necessary.

The ground, though, may have begun to shift. The private groups have begun to circulate to their members a document noting their obligation to customers of a safe environment to conduct business, their potential for liability if this obligation is breached, and the specific engagement they must have with staff if they want to implement special policies to protect clients and workers. That document came as a handful of companies told employees they would have to vaccinate or present weekly negative COVID-19 test results.

“The duties owed by the employer to workers, customers and members of the public are legally enforceable against the employer, who can be sued if a worker, customer or member of the public is injured or harmed as a result of the employer failing to discharge any of these duties,” the document says. After listing what the law mandates the procedures an employer must follow if an employee fails to adhere to the company’s declared policy, the advice document says: “It is only if conciliation as above fails that an employer may, under this Protocol, move to dismiss an employee for failing or refusing to comply with reasonable measures designed to contain the spread of COVID-19 in the workplace.”

Last week, Mr Holness agreed that “the current situation does give strong justification that we should give a directive for a vaccination to be taken”, but didn’t indicate if or when such a directive would come. He spoke of the need for “intensive public education” to encourage Jamaicans to take the vaccines.

We believe in that process, too. But there is also need for another discussion. Whether the crisis is so big and the need for intervention so urgent that it satisfies the test of what is reasonably justified in a free and democratic society for a government to infringe on fundamental freedoms – in this case, privacy and choice.

Should he need inspiration to take on this discussion, Mr Holness might look to US President Joe Biden. Last week, Mr Biden mandated that all healthcare workers, and most federal workers, including contractors, have to be vaccinated. So, too, must workers in private firms where more than 100 people are employed.