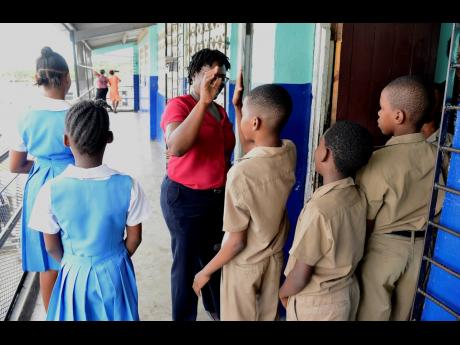 File
In this May 2019 photo, Michelle Robinson (centre), principal of Mountain View Primary School, congratulates some of her grade four students as they leave the classroom where they sat the Primary Exit Profile examination. With positivity rates skyrocketing, deaths ticking upwards and hospitals bursting at the seams, anxious parents now look at face-to-face school as a distant dream from long, long ago.

Ahh, September. Perhaps the most bitter-sweet month of the year. As a youngster, September meant returning to the schoolyard to see friends I hadn’t seen in months, the smell of brand new, freshly starched school uniforms and the promise of greater things to come now that we had moved up a form. But September also meant an end to lazy summer days, the resumption of pre-dawn cold showers and the daily battle of getting on a packed #75 bus up to Papine.

I had seven wonderful Septembers at Jamaica College. Looking back, there’s very little I would change about my JC years, good or bad, including that time I got a black eye in a fight with Sean Greaves just behind the Math block. JC taught me discipline, brotherhood, loyalty and justice, and in the case of that fight, to keep my guard up while throwing the left hook. When it was time to leave that fateful June, I literally cried after failing to convince the Headmaster to allow me to repeat sixth form so that we could try to improve on our semi-final appearance in our last School’s Challenge Quiz outing. But alas, Mr Taylor, God rest his soul, would not relent and I was sent through the gate to begin my journey into adulthood. My formal education at “The College” may have ended that year, but I never left JC. And as a grown man, what better way to repeat the glory years than to have my son follow my footsteps through those majestic gates at Old Hope Road.

But COVID-19 had other plans. After waiting 12 years for young J.C. Jarrett to don his blues and proudly step onto the campus from which he got his name, imagine my disappointment last September when high school day-one saw him awakened at 5 am, forced to take a freezing early morning shower, dressed in his over-starched blue shirt and pants, and marched into the dining room to log onto a zoom meeting. Next term will be better I promised him.

Fast forward a year later and here we are facing a repeat of last September. With positivity rates skyrocketing, deaths ticking upwards and hospitals bursting at the seams, anxious parents now look at September face-to-face school as a distant dream from long, long ago. COVID-19 had a disastrous effect on schools the last 18 months and no one is looking forward to a repeat episode. At the very least, perhaps some sort of hybrid combination of online and in-person classes may have been the last glimmer of hope that parents were holding out for.

Last year, schools were given some latitude to come up with their individual COVID-19 face-to-face protocols, many of which were approved by the Ministry of Education. These protocols included reducing class and schoolyard sizes, alternating virtual and online days, mandating mask-wearing, hand washing and social distancing, and staggering timetables across the school term. But when the numbers spiked, Government wisely pulled back, opting to play it safe rather than risk an outbreak among children. While the protocols were sound in principle, many of them had significant gaps, namely public transportation, which introduced an element of risk as there was no guaranteed safe passage to the campus bubble. While some schools did make the case that few or none of their students took public transportation anyway, another possible pushback was that it would not look good for Uptown High to be having face-to-face classes, while Below-Cross-Roads Primary was forced to stay home.

Which raises an immense philosophical question: If the ship that our children’s education is sailing on starts to sink, should some children, by virtue of having access to life jackets and lifeboats, be saved? Or should we let the boat sink with all souls on board, in one broad, sacrificial show of defiance to the COVID Gods?

The uncomfortable truth is that not all schools are created equal. Some are more resourced, more organized, more capacious and therefore more resilient to the COVID-19 pandemic. A small school with 100 per cent of its student body arriving by foot or private transport is far less likely to have a COVID-19 incident than its larger, public transport-taking counterpart. A school with a stronger management structure and a more involved, engaged and organised PTA is more likely to come up with creative solutions to the face-to-face/virtual class challenge, than one without. One could reasonably argue therefore that if we are to have something vaguely resembling normal school this term, then perhaps our schools should look to improve on their submissions from last year by coming up with a set of creative logistical solutions to the safe transport dilemma and re-submitting them for consideration. Assuming that a school had a pre-approved plan for face-to-face learning last year for instance, all it may now need is to address the transportation problem by drilling down and refining the logistics along the lines of determining how many parents actually want their children to return, how many walk or drive to school and how many of those driving parents would be willing to offer carpooling to children in their communities or along the route? And for those children left behind after these questions have been answered, what would it cost to provide a school bus service to move them safely and could that cost be shared across the entire school community? On the supply side of the learning equation, they may then need to determine how many teachers have to stay home because of comorbidities, how many can be moved to and from school safely, and what additional resources or class management adjustments, if any, would be needed to hold in-person and online classes simultaneously. Throw in the newly available Pfizer vaccines for children into the discussion and more possibilities begin to open up.

LEAVE NO STUDENT BEHIND

Of course, the logistics associated with this plan are not as simple as I’ve outlined here. Even after making these considerations, some schools will still have a large population of students left behind. The great philosophical question will therefore still remain: Do we allow some students from the clearly privileged Uptown High to survive, while those from Below-Cross-Roads Primary flounder, thereby widening the education gap between rich and poor even further? One possible answer is that whether or not the Government sanctions such a move, some parents see little value in continuing their children’s online learning and a privileged few are already making plans to bite the bullet and invest in safe, effective, face-to-face learning environments. One could argue however that a plan similar to the one outlined, spreads this privilege across the wider school community and helps to share the collective burden of creating a safe, effective learning environment.

Regardless of where you sit on this issue, one thing is clear; last year was a disaster for our schools. Another year of this means risking real long-term damage to our children’s learning and educational development, not to mention the possible impact on their social, psychological and physical health. Kids were not meant to sit in front of a computer locked away from each other. They should be up and about in the schoolyard, learning about Math and English, teamwork and friendship, and very importantly, the correct way to roll out of a left hook while keeping their guard up.