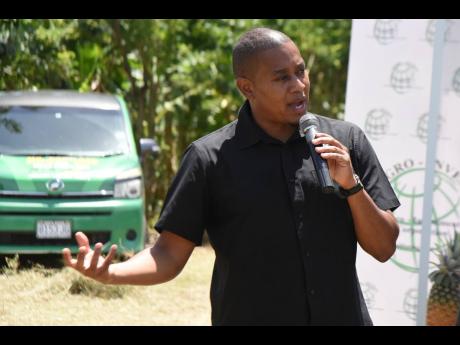 It’s tempting to start at the point of Floyd Green’s resignation and gloss over the rest. His departure was commendably swift and his apology unequivocal and apparently sincere. He apprehends why he must don sackcloth and be bathed in ashes.

Empathy, in the circumstances, encourages dwelling on moral and political comparisons between Mr Green and other public officials of recent times, who, after their misbehaviour, were dilatory and meandering in accepting responsibility. Some never do. They have to be coaxed or coerced to leave.

But in all this, we shouldn’t lose sight of Mr Green’s egregious action, or use his quick acknowledgement of error to elevate him to martyrdom. In that regard, it was quite inappropriate that even before Mr Green has had time to reflect on the brazenness of his indiscretion, Prime Minister Andrew Holness was offering some new role, a quick route to rehabilitation, outside the Cabinet. The prime minister wants to make use of Mr Green’s “expertise”, although what specifically this is he didn’t make clear.

What, however, is unequivocal, is that the contemporaneous action of accepting the resignation of the minister and suggesting that he is indispensable weakens the idea of accountability and penalty, which the resignation is intended to convey.

Mr Green, 39, was among the youngest members of Prime Minister Holness’ Cabinet, having been given the agriculture portfolio after the election of a year ago. Prior to that he served as a junior minister in several portfolios. So, by experience, and even age, he should have been past the point of being beguiled into “youthful exuberance”.

Yet this week, on a COVID-19 lockdown day, when most other Jamaicans were confined to their homes, their movements restricted by law, Minister Green (as he was then) toast at the ready was part of a raucous, mostly mask-less crowd, at a hotel restaurant, swigging Champagne and other spirits and gouging on an assortment of foods. Adding insult to this injury against the law, and those Jamaicans who abided by it, some in Mr Green’s party mockingly reminded by their shouts that it was a “no movement day”. A celebratory slogan used by the governing Jamaica Labour Party (JLP) also rang out. Women danced.

We know these things because the event was captured on video and broadcast on the Internet. Essentially, Floyd Green was caught.

There are a number of things to bear in mind about this event and its timing – on a “no movement day”. The several weeks of three-day no movement period (Sunday-Tuesday) were fundamental to the Government’s strategy for slowing Jamaica’s third wave of the coronavirus epidemic. In the period since the start of August, up to September 14 (apparently the day of the fête), 24,260 new cases of COVID-19 were confirmed in Jamaica. Five hundred and sixty-one people died, 21 of those deaths were reported on Tuesday. Hospitals continue to be overcrowded with COVID-19 patients.

Floyd Green, as a member of the Cabinet, would have been party to the decision to designate no-movement days. Even if he did not agree with the decision, in accordance with the Cabinet’s principle of collective responsibility, he was bound by it. Further, even if he was not the oldest person in the gathering, he was, based on the evidence of the video, the most senior politician there. Andrew Bellamy, a local government councillor (who has resigned from the state boards on which he served as well as from committees of the Kingston and St Andrew Municipal Corporation of which he is a member) was present. So, too, was a female adviser to former Minister Green, whose birthday, it is said, was being celebrated.

In this regard, Mr Green not only breached Cabinet’s collective responsibility, he displayed a lack of political leadership, and more critically, disregard for the best scientific advice, in the absence of vaccination, on how to curtail the spread of the virus. There was no adherence to recommended distance between the guests; there was no wearing of masks. People shouted in each other’s faces.

This was no minor transgression, but rather egregious behaviour by the minister. It will make it more difficult for the Government to get buy-in for its COVID-19 containment measures, especially from the anti-vaxxers and vaccine sceptics. One law for the Persians; another for the Medes.

We appreciate Mr Green’s clear recognition of his error and the dispatch with which he declared: “I was wrong.” We welcome, too, that there was no vacillating attempt to hold on to his job, whether or not he jumped voluntarily, or was pushed by Prime Minister Holness. Hopefully, it’s an approach that others in public life will follow. With respect to this administration, it is the standard Mr Holness should insist on.

We also like that Mr Green is lacking in hubris and doesn’t appear to expect automatic rehabilitation. He will work hard, he said, “to regain the trust of the Jamaican people”. There should be no attempt to foist him on them by short-circuited political processes.