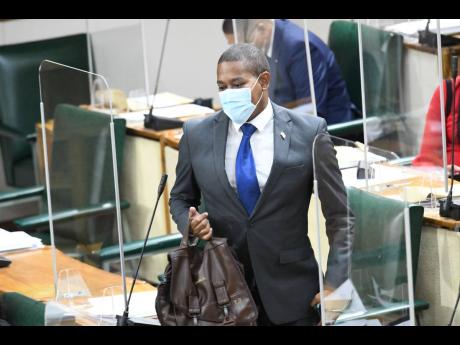 Rudolph Brown
Floyd Green arriving at Parliament hours after his resignation as minister of agriculture and fisheries on Wednesday. Floyd appears to be a respectable man with good work ethic, and clearly his work speaks for him. Hopefully, he’ll make a good comeback.

The typical political apology is a non-apology apology, usually sidestepping the accusation and more often than not expressing sorrow at the public’s choosing to become upset. It usually is not clear and uses a whole lot of William Shakespeare-type language to confuse everybody. “With regard to the aforementioned, I herewith express deep sorrow and regret at the disappointment many a citizen has felt arising from the representation of my actions in the matter at hand.” Or something like that.

Jamaica has seen quite a few of these over the years.

Personally, if one does not see himself or herself as being guilty, I would rather they not waste time trying to apologise. It saves people from grievous headaches trying to search through the overflow of words to find the apology. And really, why apologise for what you would do again?

Politicians, however, will always have a very special relationship with apologies because their jobs are unique. Their jobs force them to appear good and noble to all people at all times, and so once they ‘transgress’ against any of the numerous subsets of people, they are almost sure to tender an apology. Politicians just don’t get to be real. At least not when cameras are flashing. There is always a script to follow and an image to uphold, and once the image takes a hit, out comes the apology to cushion the fall.

Nevertheless, quite a few of the better-trained politicians, well learned in the art of public impressions, can manage to spin an elegant apology and deliver it with unmistakable grief and remorse. In many cases, the offender is indeed repentant – though sometimes only of getting caught with their hand in the cookie jar. It is easy to appear solemn and sad because they are solemn and sad. It is saddening to know that because of one misstep their deeds have been uncovered to the world.

I am not a big fan of calls for apologies. Apologies mean very little when they are prompted by others, not spontaneously given, and also when they are delivered hours after a premeditated offence that could have hardly taken place accidentally. Politics is all about playing the game of saving face all the time. But sometimes, hypocrisy can’t hide. It is obvious when one’s actions don’t align with their self-proclaimed ethos.

Regarding Minister Floyd Green’s misfortune in having to resign from the Cabinet, while the prime minister has acted in the principle of accountability, it is easy to note that quite a bit of what has taken place (and what typically takes place) may just be more symbolic than anything else. You know, a symbol of accountability in the form of a resignation and a symbol of sorrow in the form of an apology. Nonetheless, Floyd appears to be a respectable man with good work ethic, and clearly his work speaks for him. Hopefully, he’ll make a good comeback.

In real life, apologies make a world of difference. They usually indicate a desire for reconciliation and an embrace of some guilt. That can certainly bring closure to the hurting. But, in the same way that teacher forces Sally to apologise to Sue and even makes her give a big hug, only for the malice to continue, if an apology has to be asked for, it probably isn’t worth the data that will be used to read it online.

A few months ago, two politicians, in particular, made some very unfortunate utterances while at a political rally. One apologised. The other didn’t. I’m glad the latter didn’t waste anybody’s time with an apology, because the repeat offender continued to eat his feet following that event and demonstrated that his words on this particular occasion were no mistake. The former was uncharacteristic in his behaviour and actually rendered a sobering apology, which was easily accepted.

Life happens. Sometimes bad company leads us where we ought not go and sometimes that pathway ends in apology. In less fortunate circumstances, it ends in resignation, or in a prison sentence. But Jamaicans are not brainless and can usually differentiate between a genuine apology and well-orchestrated damage control. Nevertheless, many times we would do well to watch the company we keep, especially when we have all to lose and only notoriety to gain from our actions. Apologies won’t always save the day.

“A parrot, red and blue and green, was at the farm house often seen;

He flew about from tree to tree as bright and happy as could be.

One day the crows pulled up the wheat and Paul too helped to pull and eat.

He chattered to the farmer’s foes, and did more damage than the crows.

The farmer brought his gun and shot, at Paul and his happy lot;

No more on high the parrot rose but lay wounded among the crows,

Paul soon grew well and hopped about, but often when the children played,

He would bow his head and sadly say ‘bad company’.”

Disclaimer: “I sincerely and unreservedly apologise to anyone who has taken offence to their interpretations of the aforementioned opinions shared as I would never seek to offend anyone. As an upstanding citizen I have nothing but respect for the views of others and wish all readers Godspeed and all the best.”

Kristen Gyles is a graduate student at the University of the West Indies, Mona Campus. Email feedback to kristengyles@gmail.com.