Peter Espeut | Why do they hate us so? 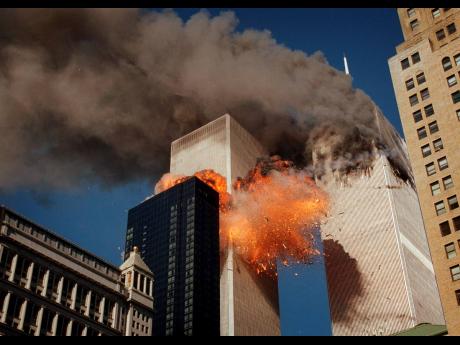 AP/ File
Smoke billows from one of the towers of the World Trade Center as flames and debris explode from the second tower, Tuesday, September 11, 2001.

Last Saturday was the 20th anniversary of the attacks on the continental United States (US) resulting in the destruction of two skyscrapers in New York City and damage to the Pentagon building near Richmond, Virginia; 2,977 persons were killed, including about 26 Jamaicans.

The events of what has come to be called “9/11” were brutal and horrific, good examples of international terrorism. The US responded by declaring a “war on terror”, which had domestic and international consequences: among them that security arrangements around air travel were made quite onerous, and US forces (supported by other countries) invaded both Afghanistan (2001) and Iraq (2003).

The most meaningful memory I have of 9/11 is a remark reportedly made by a horrified spectator as she watched the destruction of the Twin Towers of the World Trade Center across the river: “Why do they hate us so?”

I think that many have spent the last 20 years avoiding that question, which is sad, because as the philosopher George Santayana said, those who do not learn from history are destined to repeat it.

During the 20th century and before, US foreign policy sought global military, political, cultural and economic dominance, and the suppression of competing or contrary elements. The list of countries invaded by US troops over the years is long: between 1798 and the present the US has been involved overtly or covertly in 165 coups, invasions of or attacks upon foreign countries, causing loss of countless military and civilian lives. In none of these cases was the US action considered to be terrorism.

In our own hemisphere during the 20th century, the US has invaded Colombia, Panama, Honduras, the Dominican Republic, Cuba, Nicaragua, Mexico, Haiti, Guatemala, El Salvador, Ecuador, Brazil, Chile, Bolivia and Grenada. In the process they have made enemies, and have become hated by many.

Over the same period in Middle East/Islamic countries, the US has intervened in Turkey, Iran, Lebanon, Oman, Libya, Sudan, Kuwait, Afghanistan and Iraq, and maintains or maintained military bases in Iraq, Syria, Israel, Kuwait, Bahrain, and Saudi Arabia. According to several opinion polls, the US is resented in the Middle East for several reasons, including its unrelenting support of Israel (including its settlements in occupied territories), the apparent lack of concern for the loss of Palestinian life in the West Bank and Gaza Strip, hostility towards Iraq, its involvement in war in the Persian Gulf, and the stationing of American troops in the region, especially in Saudi Arabia.

The populations of several Arab countries support “terrorist” organisations in general and the attack on the World Trade Center in particular, some say, as a reaction to and as psychological resistance against this perceived domination by the US in the region and the world. For many, “terrorism” may be seen as an anti-dominance project by the weak against the strong.

This, of course, does not justify terrorism or violence, but may help to explain “Why do they hate us so”.

What is ironic is that Osama bin Laden was trained, funded and armed by the Central Intelligence Agency (Operation Cyclone) in support of the Mujahideen (those engaged in jihad) in resistance in the Soviet-Afghan War in Afghanistan.

The US responded to “9/11”, not by adopting a more balanced foreign policy, but by doubling down; it invaded Afghanistan and Iraq. I remember President Bush declaring to countries like Jamaica: “Either you are with us or against us”. Rather than making the world safer, that approach has intensified polarisation. The global arms trade fuelled by the US and other countries has put guns in the hands of irresponsible people, including Jamaican criminals and political malcontents.

With the rise of the (religious) right in the US, and with communist China flexing its economic muscles globally and insinuating itself all over the world (look for the pun), we are headed for interesting times, to put it mildly. The weak will continue to resist the dominance of the strong.