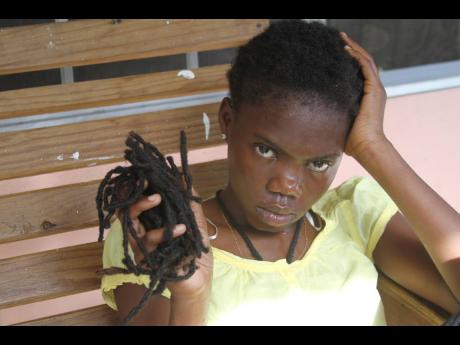 File
Nzinga King, 19, with a handful of her dreadlocks she saved after she was allegedly trimmed by a cop. Nearly two months later, there has been no report to the public on the findings on this matter currently being investigated by INDECOM. 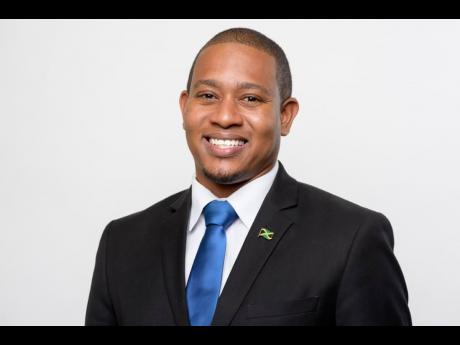 There was outrage on social media over a video that emerged showing Floyd Green at a hotel celebration toasting to a COVID-19 no-movement day comment. 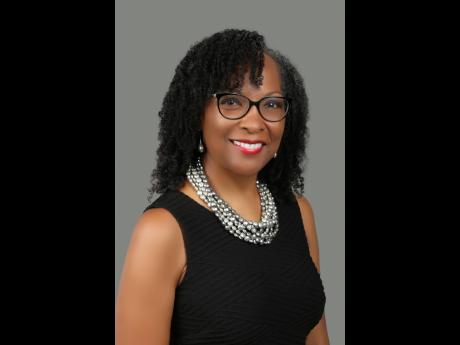 Anger and frustration have been mounting as Jamaicans perceive differential treatment of the ‘privileged few’ who apparently live by different rules and have access to resources and opportunities not afforded to most Jamaicans.

This group comprises mainly white and brown-skinned Jamaicans whose entitlements are rooted in colonial privileges and is reflected in the well-known saying, ingrained in the psyche of Jamaican children, “If yu white, yu right; if yu brown, stick around; if yu black, step back.” In the post-colonial era, more and more black-skinned Jamaicans have joined this privileged class as they acquire education, wealth and/or political power and are well connected to local and international ‘movers and shakers’. Unfortunately, many embraced rather than rejected the inherited sociocultural norms. As Jamaica grapples with the overwhelming social and economic burdens of the pandemic, there is growing scrutiny and resentment of a culture of privileged behaviour that was previously accepted as the norm by many who frequently say, “Ah suh de ting set!” I suggest ‘building back stronger’ must address this ‘culture of privilege’.

The most recent display of privilege was the viral video of wining and dining by (former) minister Floyd Green and others on September 14, a ‘no movement day’, apparently in breach of the Disaster Risk Management Act (DRMA). This followed the special access given to a few, selected resort facilities by cruise ship passengers during a ‘no movement day’ on September 13. These and other apparent breaches of the DRMA on private yachts; in hotel lobbies; office parties; private parties in gated communities … and more, many captured in videos on social media, have left many Jamaicans feeling that the laws do not apply to the privileged few.

Recently, many were outraged to hear that a police officer from the Four Paths Police Station unlawfully trimmed the dreadlocks of a 19-year-old woman, who was arrested and charged for breaches under the DRMA on, or around, July 21. Nearly two months later, there has been no report to the public on the findings on this matter currently being investigated by INDECOM. One wonders, what would happen if the hair of a 19-year-old brown-skinned Jamaican, daughter of a ‘Big Man’ from the privileged class, was cut by the police?

But … dat caan happen in Jamaica! A typical middle-class ‘browning’ feels secure in her ‘culture of privilege’. First, she ‘knows’ that she would not be arrested, certainly not for breaches under the DRMA. If questioned by the police, she would immediately call Daddy or ‘Sugar Daddy’, who would ‘mek a call’ and settle the matter. Occasionally, the security of the COP fails. For example, on April 2021, employees of Victoria Mutual were charged with DRMA breaches. However, the experience of many micro/small business owners and poor, powerless, working class, black people is that they have been routinely charged and arrested for DRMA breaches.

Second, who would dare cut off the ‘good hair’ of a browning? But, what if she wore Bantu Knots? Well, it MAY not be cut, but she may be prohibited from taking a graduation picture. Earlier this year, Manning’s School students were told that no ‘Bantu Knots/Chiney Bump’ would be allowed in the photo session for their school-leaving exercise.

‘Good’ hair and skin colour are integral to the culture of privilege in Jamaica. While many view the persistent prevalence of skin bleaching in Jamaica as evidence of internalised self-contempt for blackness, its persistence speaks volumes about a social context where real economic and social advantages to brown skin colour persists and where the COP is fiercely asserted. Not even Usain Bolt was spared the assertion of a privileged place in Jamaican society when he dared to move into an upscale St Andrew apartment complex. In 2016, Bolt noted that the “strong bad mind” of neighbours left him shocked, and he admitted facing “strong” levels of classism and racism throughout his rise as a global athletic icon.

After nearly 60 years of independence, a culture of privilege and entitlements, embedded in our social, economic, legal and political institutions, continues to haunt Jamaica today at a time when we need ‘all hands on board’. The COP is systemic; it is rooted in decades of privileged access to key development assets, especially high-quality academic education, land, financing, as well as the power and resources of the State and its institutions. It contributes to persistent inequalities and criminality, and limits Jamaica’s development potential due to the underperformance and underachievement of many.

To give real meaning of the promise to ‘build back stronger’, we must address the underlying structural causes for persistent race/class/colour discrimination and privileged entitlements in Jamaica. Decades of research, analysis and advocacy point to the need to address the deep-seated psychosocial, economic and political legacies of slavery and colonialism that has been institutionalised through laws, policies, and ‘normative’ discriminatory practices. In this year’s Emancipation Message, Prime Minister Holness reminded us that the “chains are gone but our mentality still enslaves us”, and implored us to “emancipate yourselves from mental slavery”. Most Jamaicans, if not all, agree. The challenge is HOW to recognise and change ‘mental slavery’. Some suggestions:

1) If we agree that the COP is ‘mental slavery’, let’s dialogue among ourselves about how we can change it.

2) These divisive norms must be deliberately rooted out. There must be zero tolerance at the highest level of society for any evidence of race/class/colour discrimination or privileged exemptions from rules applicable to all Jamaicans. Swift, decisive action is essential. Minister Green’s swift resignation after the viral video is a step in the right direction and will undermine the COP. The law must also be applied to all who breached the DRMA.

3) The Ministry of Education must actively root out unequal access to education in the school system and use novel self-esteem building tools and culturally based interventions to address the myriad of psychosocial problems our children face, especially in crime-prone communities. We must also simultaneously transform the larger social, economic and political context where these children live.

4) Scientific knowledge and innovative entrepreneurial thinking, rather than power and privilege, must guide strategic decision-making.

5) Growing economic indicators are meaningless if they do not reflect improved living conditions of the majority. The indicators that matter are those that measure economic disparities, such as asset inequalities.

6) Finally, we need good governance that responds to the ideas, needs and will of the people and not only the privileged few. Centralised governance, controlled by a few, perpetuating old political norms of ‘hostile tribes’ fighting for ‘scarce benefits and spoils’ must also be seen as ‘mental slavery’. That, too, must change!

Building back stronger requires us to tackle the inherited structures that perpetuate Jamaica’s COP and build on the strengths of the majority of us, not just the privileged few.