Garth Rattray | What happened to Floyd? 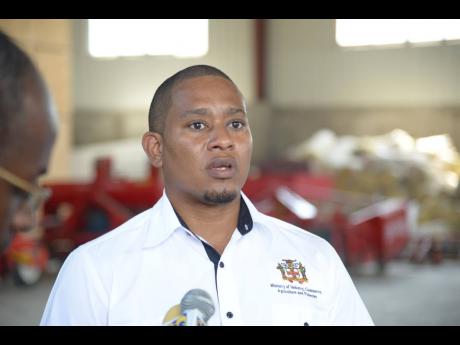 File
The question is why young Mr Green, such an apparently level-headed, responsible, mature, intelligent, hard-working, trusted, rising star of a politician, would risk debauching his political career.

I am not a political animal, but I have very good friends on both sides of the political divide. I have a lot of admiration and respect for politicians, but I am also aware that there are things about politics that make me extremely uncomfortable. I have therefore refrained from aligning myself to any political party.

I recall the first time that I saw young Mr Floyd Green; it was during a political debate. I was impressed by his width and depth of knowledge, and by his calm yet determined demeanour. I could tell that he would go very far. The next time that young Mr Green appeared on my radar was when he was the minister of agriculture. Naturally, I watched his performance with some amount of personal pride because I predicted that he would do well at his job, and he was doing very well indeed.

Fast-forward to that infamous video of young Minister Green and company celebrating during a lockdown, without any regard for COVID-19 protocols. Like most Jamaicans, I was taken aback, mortified, disappointed and upset that such activities were being carried out at a time like this. What took place was illegal, dangerous and dismissive of the efforts of [his Government] to gain control of this rampant and deadly pandemic.

In all of this mysterious milieu I find myself wondering why young Mr Green, such an apparentently level-headed, responsible, mature, bright, intelligent, hard-working, trusted, rising star of a politician, would risk debauching his political career. What allowed all of them to believe that it was okay to flout the rules, to break the laws of nature and the laws of man? What made them believe that they were immune to this virulent Delta variant of the SARS-CoV-2 virus and above the rules and regulations set out in law and in principle by their Government? What imbued them with such confidence in their wrongdoing?

Over the years, on both sides of the parliamentary aisles, the acquisition of ‘power’ brought with it a feeling of being special, an ability to act outside the norm, and unfortunately, a feeling that there is little or no accountability. Although power does not equate with privilege, many think that it does. This does not apply across the board to every politician, but power and privilege in the hands of one so young can be intoxicating. I vividly recall a certain prime minister downplaying the unfortunate actions of one of his subordinates by relegating his missteps to “youthful exuberance”.

Many people in positions of power, political or otherwise, get caught up in their status. Being in charge of the welfare of others – political, legal, medical, administrative, whatever – does not elevate us above the people that we serve; in fact, it places us below them so that we can support and lift them up. We owe them our fealty, we owe them a duty to do our best for them, and we owe it them to set a good example for them to emulate.

Everybody knows that there have been many instances where politicians have escaped accountability because it would not serve the interest of the party to fire the wrongdoer. In some jurisdictions, politicians resign or are fired for the slightest hint of impropriety or possible scandal. However, Jamaica is not known for taking such actions. The recent ‘stool situation’ is a prime example. The ‘suspect’ should have resigned, but he remained untouchable. That set a very bad example to the nation and to other politicians.

Obviously, what young Mr Green and company did was egregious on many levels; but he acquired some redemption by resigning. I love this quote by John Wooden: “The true test of a man’s character is what he does when no one is watching.” Nowadays, we must all assume that cell phone cameras are watching...and recording.