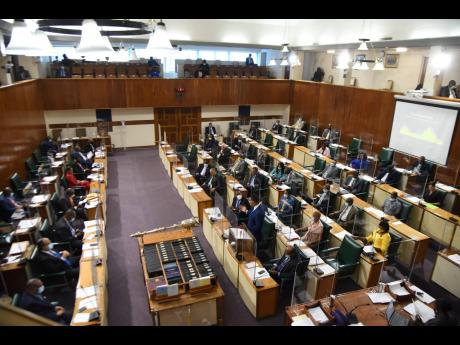 The House mostly meets once a week – excluding a long summer recess and other holidays – and manages around 50 sessions a year, of about three-and-half hours each. Our House may get through, in robust years, a little over 40 pieces of legislation.

Jamaica is replete with instances of Parliament being roused from its hypersomnia to address a seemingly urgent development only for it to return to its dozy state long before the issue had been resolved.

It is a wonder sometimes that the legislature, or the Government, remembers what the issue was about when they finally finish what had been started – like with last week’s approval by the House of regulations that will finally allow for loan cooperatives that lend to farmers to be regulated by the Registrar of Cooperative Societies.

The underlying legislation for these regulations, the Agricultural Loan Societies and Approved Organisations Act, was passed all of four years ago.

The event that spurred the law and the related regulations were once deemed to be a matter of grave concern and great urgency. It was after the National People’s Cooperative Bank’s (PC Bank) latest brush, in 2015, with insolvency, which caused it to be taken into administration. The bank had also been previously bailed out by the Government.

A special audit of the PC Bank discovered that its managers couldn’t account for over J$665 million of depositors’ money, or around a fifth of their saving deposits. Board members, it was revealed, loaned themselves large sums, including for projects that others, such as the Development Bank of Jamaica (DBJ), had concluded didn’t pass muster.

Moreover, not only did the bank’s brass lend themselves money, but the disbursements were often made without appropriate collateral and, it appeared, subject to whimsical restructuring to ease terms.

But while the permissiveness and ineptitude of the PC Bank’s governors and managers drove the crisis, the institution also suffered from an appalling failure of oversight. The Agricultural Credit Board (ACB) wasn’t fit for purpose.

This newspaper was among those who called for the cooperatives that lend to farmers to be brought under the supervision of the central bank, as was intended for the island’s self-regulated credit unions. Matters of how credit unions are regulated remain a work in progress.

With regard to the specialised farm lenders like the PC Bank, the Government instead developed the Agricultural Loan Societies and Approved Organisations Act, which was passed by Parliament in 2017. It was assented to by the governor general, Sir Patrick Allen, on November 20 of that year. The legislation settled regulatory oversight for these types of financial institutions on the Registrar of Cooperatives.

But giving effect to the generalities of the law requires specific operational regulation on which Parliament also had to sign off. Which is what happened last week – four years after the passage of the underlying bill. This oughtn’t to be what urgency looks like.

This, though, isn’t the worst demonstration of Parliament’s, and the Government’s, too slow approach to important matters, when they don’t immediately affect the well-being of politicians.

Last month’s gas-poisoning of three workers while cleaning a cesspool reminded Jamaicans that the kind of work these men did is hazardous; that cesspool cleaners are mostly untrained for their jobs; and that the industry in which they were employed is wholly unregulated.

Indeed, in the face of the tragedy, there were calls from some operators of cesspool cleaning companies for Government intervention in the sector, especially in the areas of training and operational requirements.

It isn’t that Jamaica’s Government is ignorant that the gases produced in sewer pits – methane, hydrogen sulphide, carbon dioxide, hydrogen dioxide, carbon monoxide, and so on – are toxic, or has no sense that people’s workplaces should meet minimum standards of health and safety.

Indeed, after more than a decade of debate about what a modern occupational safety law should look like, the Government, in 2017, tabled the Occupational Health and Safety Act, which is to replace the existing, but outdated, Factories Act.

The bill’s tabling was the same year Parliament passed the still non-operating law for agricultural loan societies and similar groups.

Unfortunately, having encountered the Government’s glacial approach to advancing policy and having likely fallen into a legislative crevasse, the bill is in need of rescue.

As are many other important bits of legislation, resolutions, and proposed debates, especially those that come from the Opposition benches.

As Ronnie Thwaites, the former MP and government minister (for the side that is now in Opposition), puts it, Jamaica’s Parliament is a lazy institution.

The House mostly meets once a week – excluding a long summer recess and other holidays – and manages around 50 sessions a year of about three-and-half hours each. Our House may get through, in robust years, a little over 40 pieces of legislation.

In New Zealand, their Parliament, outside of recess periods, meets three times a week – on Tuesdays and Wednesdays for seven hours each day and Thursdays for three hours. That’s a total of 17 hours a week when the Parliament is in session – far more time than is available to Jamaica’s for legislators to debate the people’s business.