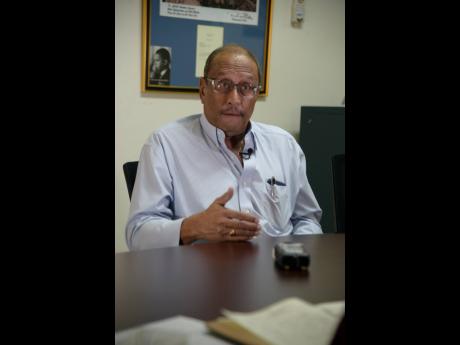 In 2019, Howard Mitchell, then the president of the Private Sector Organisation of Jamaica, proposed that Jamaica borrow from the UK law

The Holness administration should indeed cut the pussyfooting and table legislation to allow for the confiscation of unexplained wealth, so that the bill can be properly, but expeditiously, reviewed and passed into law.

At the same time, as we have urged before, the Government should direct its law-enforcement agencies, especially the Financial Investigations Division (FID), to, as a matter of policy, aggressively use available laws, including the Proceeds of Crime Act (POCA), to go after wealth that it is reasonable to assume is the fruit of crime and corruption. Tax Administration Jamaica (TAJ) must be appropriately employed in this campaign.

A law allowing for judges to issue unexplained wealth orders (UWOs), we were recently reminded by the Crime Monitoring and Oversight Committee (CMOC), was one of the commitments in the memorandum of understanding the Government signed with the parliamentary Opposition, private-sector and civil society groups 14 months ago. The UWO law was supposed to be one of the early, and urgent, actions.

But the CMOC, at its late September review of its work, complained that this legislation, as well as other anti-corruption-related undertakings, are substantially delayed. The CMOC called the 12-month delay “completely unacceptable”.

Worse is the administration’s failure to offer an explanation for seemingly sleep-walking through the matter, which is surprising, given that Prime Minister Andrew Holness frequently inveighs against corruption, the urgency he places on fighting the problem, and the many allegations of graft and misappropriation of public resources that have dogged his administration.

Then, as the CMOC pointed out, there is that little matter of economics, which ought to animate governments. There is an estimate that countries with the profile of Jamaica lose perhaps five per cent of their annual output to corruption, which, in Jamaica’s case, amounts to around US$730 million a year. Money down the drain, or more precisely, money flowing into people’s pockets. Those sums should have gone to building schools, hiring more and better trained teachers, keeping roads, drains or hospitals in better repair, or paying for other services that people expect their Government to provide.

There is worthwhile logic behind the concept of UWOs – and equally good reasons for why such law demands sound review before implementation. Which is why the administration’s somnambulism on this issue is worrisome.

Largely pioneered in Britain – which issued its first order in 2018 against the wife of the top official of a Azerbaijan state bank, who was jailed for fraud – the UWO was seen as a better, easier-to-use tool than the Proceeds of Crime Act to use against foreign politically exposed persons (POPs) who stash ill-gotten wealth in the UK. The wealth holders, as was the case of the Azerbaijani banker’s wife, have to prove the legitimate source of the assets or forfeit them.

In this situation, the burden of proof, unlike what is the norm in most circumstances in common-law jurisdictions, rests with the accused, rather than the State. That, in Jamaica, could potentially raise constitutional questions around the conduct of trials and property rights. Which is why the proposed law must be reviewed to avoid loopholes and a basis for its overturn. Foot-dragging is, therefore, problematic.

But as we first observed in 2019, when Howard Mitchell, then the president of the Private Sector Organisation of Jamaica (PSOJ), proposed that Jamaica borrow from the UK law – and again a year later when a researcher at the Caribbean Policy Research Institute (CAPRI) reprised the issue – it is not novel for Jamaica to confiscate tainted assets. That is allowed under the island’s POCA legislation.

While not with the flexibility that would be allowable with the UWO legislation, the State can go, and have gone, after assets gained by criminal conduct, or which came to people because of criminal lifestyles. Other beneficiaries of the tainted assets can also have theirs forfeited.

EASY THING TO DO

In deciding if the accused is the beneficiary of a criminal lifestyle, or accrued assets from criminal conduct, the court makes the determination on “a balance of probabilities”, rather than “beyond a reasonable doubt” – the general standard for criminal matters in our, and similar, jurisdictions.

While the State has confiscated wealth after people are convicted of criminal conduct, especially after narcotics-related cases, the use of the law’s other elements has not been robust. That should change.

Additionally, the tax authorities should target people with obvious, but unexplained wealth. People with unexplained wealth should be appropriately assessed for their tax liabilities. After all, tax evasion is a criminal offence. The TAJ’s actions in such matters should not be secret.

Jamaica must work on multiple tracks at the same time in fighting corruption. A credible UWO is a relatively easy thing to do.