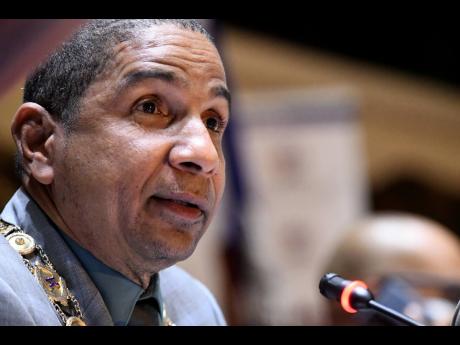 On August 6 this year, the 59th anniversary of Jamaica’s independence, Delroy Williams was named among more than 200 Jamaicans to receive national awards – in his case an Order of Distinction, Commander class (CD). On Monday of this week, National Heroes Day – or sometime before that if these things are filmed ahead of time – the mayor was sufficiently alive for his walk-on cameo for the virtual awards ceremony.

Mr Williams’ recognition was for “public service in the area of local government”. His deputy at the Kingston and St Andrew Municipal Corporation (KSAMC), Winston Ennis, was also invested into the Order of Distinction, but in the Officer class. He is an OD.

Messrs Williams and Ennis were perhaps fortunate that the members of the committee that makes these decisions probably were not required to make a physical inspection of the city over which the awardees preside. Or maybe the committee men are inured to the squalor of Kingston. Particularly the old downtown section of the capital, and especially its commercial district, where tens, and maybe hundreds, of millions of dollars change hands each day. By some estimates, the value of commercial activity in downtown Kingston is equivalent to 10 per cent, or more, of Jamaica’s GDP.

It may be that the state of the city was not among the criteria for assessing the quality of Mr Williams’ (and Mr Ennis’) public service, or the calibre of the mayorship he had held for nearly five years. Were that part of the yardstick, the committee might have had cause for deep reflection – and pause. That notwithstanding, Mayor Williams should do his own introspection and therefrom pledge to do better for the city.

The shame of Mr Williams’ tenure as mayor is that few, not least this newspaper, expected or asked for too much of him. He has delivered substantially less.

At his inauguration, Mr Williams spoke vacuously about making “Kingston the capital of the Caribbean, the pearl of the Antilles, and a major player on the Latin American landscape”. We did not then, and have not up to now deciphered what he meant. We, however, assumed that it sounded good to his ears, which is perhaps the same with his sporadic, wake-time mumblings about Kingston’s transformation into a ‘smart city’.

Our ambition was far more modest. Like the vast majority of people who live in the Kingston metropolitan area, we hoped for a relatively clean city with a semblance of order. He should start, we urged Mayor Williams in December 2016, by focusing on the little things, like pruning the ficus planted on the sidewalks of downtown Kingston’s main streets, and having the city cleaned of the squalor with which it is overwhelmed.

“It would not be enough to argue that this remit is the responsibility of some central government agency and outside the purview of the KSAMC,” we said.

Well, the ficus remain overgrown; the city’s drains are mostly still rank and rancid; and the downtown commercial centre and market district continue to be without governance and order. On roads that are supposedly open to motorised traffic (Beckford Street and West Queen Street are examples) vendors’ ramshackle stalls clog the thoroughfares, and access to buildings is limited. We shudder to think what would happen in an emergency and first responders’ vehicles had to travel along these streets.

The city’s squalor, of course, is not confined to downtown. In November 2018, approximately two years into Mr Williams’ mayorship, Calvin Allen, the senior superintendent in charge of the police’s then newly created Public Safety and Traffic Enforcement Branch, spearheaded a washdown of Half-Way Tree Square as part of the police’s strategy to bring order to an important section of the capital.

“The area has been heavily stenched with human waste, mostly urine, which has resulted in a health hazard in the areas of Half-Way Tree,” Mr Allen said.

That initiative, it is noted, was led by the police and involved the fire brigade. It has not been replicated, and Half-Way Tree Square is increasingly coming to resemble downtown, even if a mini version. Once-pristine vendors’ kiosks, provided by a corporate donor, are now unkempt and tatty. Sidewalks are clogged with stalls. The mayor, apparently, does not notice.

To be fair, Kingston’s squalor, disorder and lack of governance did not start with Mayor Williams. But without the kinetic energy of his Jamaica Labour Party predecessor, Desmond McKenzie, who was able, for a time, to persuade people that perpetual motion was actually getting real things done, or the measured cadences of the People’s National Party’s (PNP) Angela Brown Burke, which, mistakenly, was believed to translate to achievements, Mayor Williams stands fully exposed. That things have grown worse is glaringly apparent.

In that respect, Mr Williams’ mayorship reminds of the late Marie Atkinson of the PNP – of seeming policy somnolence and cognitive hibernation. Mayor Williams, however, can work to change the narrative.