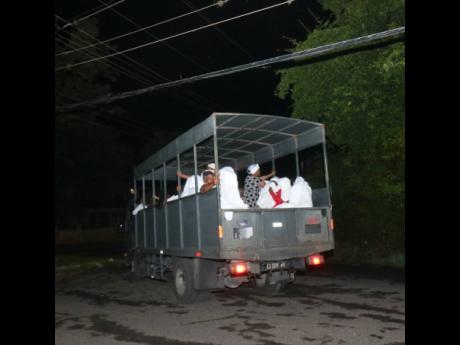 Ashley Anguin
Members of The Pathways International Restoration of Montego Bay being taken away in a JDF vehicle.

Jamaica is reputed to have more churches per capita – 1,600 and growing – than any other country in the world. Even though that statistical claim has been challenged by sceptics, the fact is that churches exist in every nook and cranny of the island.

Available statistics reveal that 65 per cent of Jamaicans are Protestant Christians and that there are more than 100 denominations spread throughout the length and breadth of the island.

The average child grew up on a religious diet that demanded that grace be said before every meal and that prayers were said every night. Religious education was routinely taught in school, and it is fair to say that there was a time when deep religious values formed the underpinning of Jamaican society.

Many Jamaicans were not aware of Pathways International Kingdom Restoration Ministries in St James. But on Sunday, October 17, that changed, and the country got a worrisome peek into their compound, where three persons lay dead and many others were injured. The leader, Kevin Smith, and dozens of his members were taken into custody by the police. They will have their day in court, and we await the revelations.

Mr Smith is one of the new breed of preachers that are gaining popularity around the world. He grabs photo ops with celebrities and political figures, and he posts them on social media to demonstrate that he is every bit as powerful as he claims, particularly because he has friends in high places. Of course, in this age of selfies, celebrities will readily oblige someone who is supposedly a fan rather than possibly face social media backlash.

These charismatic preachers tend to be very expressive, delivering their sermons in dramatic fashion. They generate a good deal of buzz, and churchgoers who crave some sort of worship excitement are drifting towards these congregations and developing a cult-like devotion to the leaders.

But there can be a dark side to this style of church leadership, where there is no accountability from a leader who brooks no criticism or dissension. It is not surprising that over the years, a great deal of controversy has been swirling around these church leaders who have generally been accused of being manipulative and abusive. More than that, though, some have shown very liberal attitudes towards sex and have been charged for criminal activity such as sex with minors, as well as fraud, financial impropriety, and violent assaults.

Although the full extent of the happenings at Pathways is not yet known, many Jamaicans are grappling with the enormity of what has so far been reported in the media. ‘How could it have happened?’, they are asking. Many have candidly expressed their concern that there are other such compounds in the island and want to see them shuttered before other lives are lost.

Let us pivot from Pathway to focus on how the Church might deal with the fallout from such events and try to re-establish ethical leadership in the pulpit. Will the Church intervene to try and mend the heartbroken members whose lives have been left in tatters?

Already, a growing number of persons have begun to question the validity of the Church as they point to the Church’s role in slavery, child abuse, racism, sexism, and hate. The Church’s soul-searching must also take into account the prediction by an Irish scientist that atheism will take over Jamaica by 2041. The conclusion by Dr Nigel Barber that atheism will overtake religion was reached after his study of 137 countries, including Jamaica.

The Church appears to have its work cut out if Jamaica is to remain a Christian country. Churches like Pathway, which are thriving in membership even as the pandemic slashes numbers in traditional churches, may not be an inspirational model.