Garth Rattray | Many motorcyclists are not blameless 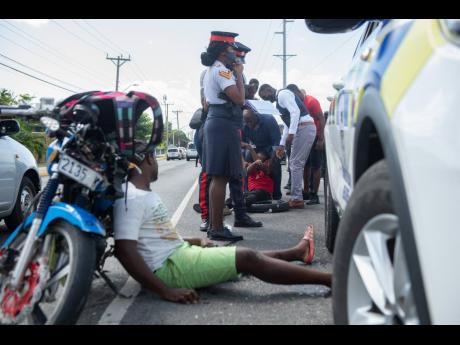 File
In this February 2021 photo, a motorcycle rider, injured in a four-vehicle collision on Hope Road in St Andrew, looks on as members of the Jamaica Constabulary Force assist another rider to be taken to the hospital for treatment.

My interest was piqued when I noticed the articles by Tarik ‘Zawdie’ Kiddoe, motorcyclist and founder of the Back To Basics Mission, and medical doctor Lucien Jones, vice-chairman of the National Road Safety Council (NRSC). Mr Kiddoe was passionate in his argument that the NRSC has not done enough to reduce road fatalities among motorcyclists. He cited several areas of concern and was scathing in his missive.

On the other hand, Dr Jones explained the circumstances under which the NRSC must operate and took pains to clarify the reasons for its limited ability to reduce the troubling number of (especially motorcycle) road fatalities. The NRSC cannot get anything done on its own; many other organisations must be involved in whatever they do. He went on to list some of Prime Minister Andrew Holness’ requests for changes designed to facilitate the mandate of the NRSC.

As a road user, it is obvious to me that there has been a veritable explosion of motor vehicles on our little island. This situation is untenable. We have taken to improving and expanding the roadways. However, we also need to figure out how to improve the security and efficiency of our public transport system, so that there will be less need for personal transport.

The increase in motor vehicles causes constant congestion, increased transit times, fuel consumption and pollution. Emergency vehicles are often impeded, tempers flare minutely, people (not only taxis and minibuses) break the law to get to the top of lines, parking is scarce, and crashes are far more common.

Frankly, I am surprised that we do not have many more crashes and far more road fatalities. We have adapted very well to the outrageous antics being carried out all the time on the roads. I, for one, try to continuously scan everything as I drive along. I am always thinking, what if that driver, or motorcyclist, or bicyclist does this or that, and what if that pedestrian suddenly darts out into the road? If someone decides to challenge my right of way, I relent because it’s never worth the possibility of injury, violence or many months waiting to repair or replace a vehicle.

I have seen cars, buses and trucks endanger motorcyclists, but I heap much of the blame on the heads of many motorcyclists for their crashes and fatalities. Even if they can buy their licences, even if they are limited by poor education, even if they are mimicking others of their ilk, they have a personal responsibility to obey the straightforward road rules in order to secure their own safety, and the safety of other road users. Many behave as if they are invincible and immortal.

It is rare to see motorcyclists sitting and waiting at traffic lights. Most of them simply go through red lights, even if there are oncoming vehicles. When I get the green light, it is very common for me to have to stop and wait as motorcyclists go through their red light, otherwise, there would be a crash.

Most motorcyclists ignore red lights and stop signs, and swish out into roadways if they are going with the flow of traffic. Any oncoming vehicle must manoeuvre rapidly to avoid a collision with them, and risk an accident with other innocent road users. They overtake vehicles while they are already turning, ‘undertake’ entire lines of traffic, and sometimes perform stunts in traffic. The large number of motorbike deliveries has significantly increased their presence in traffic. Sadly, helmets appear to be optional luxury accessories.

Motorbikes are exhibiting the same undisciplined, selfish, lawless, aggressive behaviour generally seen on our roads, but they have no surrounding structure to protect them. Only when we bring back discipline on our roads will crashes and deaths abate.