Ronald Thwaites | Religion and values essential to us 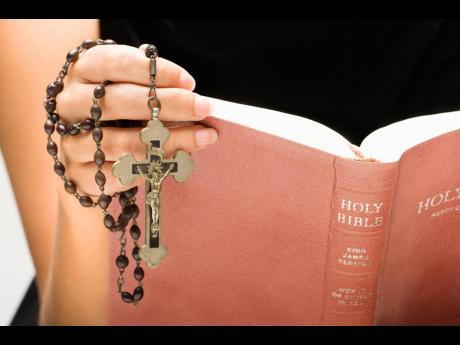 Ron Chapple Stock
The espousal of the Christian tradition by the majority is bereft of a beautiful, vital and, for most of us, an indispensable praxis of reason and faith, giving existence sublime meaning and purpose.

The Gleaner editorial puts it well in this weekend’s edition. “..There was a time when deep religious values formed the underpinning of Jamaican society... .” The remark was made in the context of the criminal distortion of ‘religious’ practice by...

The Gleaner editorial puts it well in this weekend’s edition. “..There was a time when deep religious values formed the underpinning of Jamaican society... .” The remark was made in the context of the criminal distortion of ‘religious’ practice by ‘His Excellency’ and his followers in St James.

For those doubtful or cynical before, that event has demeaned the value of religious faith and observance, and even for us weak believers, who are appalled that the cause of Jesus is being once again used to lead to murder and cultic messianism.

If our nation is not any longer founded on religious values, then what? Will our life principles be founded on the ethos prescribed by our political overlords; or the ethics of the money people who tolerate everybody else’s starvation and debasement; or will it be the ‘jook Jacquelin’ media culture – which is more obsessed with sex than even the worst elements in some churches?

Scratch Christian history (and many other faiths also), and the records of excesses, intolerance and gross wickedness abound and shame the souls of the sturdiest adherents. The Roman Catholic tradition, to which I belong, has been at one and the same time, a great defender of life and vehicle for goodness, and also the cause of great slaughter and terrible crimes in times past – and even now.

Sin is a reality. Martin Luther and Pope Francis, spectacularly, end up singing from the same sankey: they both said that none of us have any high horse of innocence to beat our chests about; that all, trembling and flawed, need forgiveness and to make reparation.

But that doesn’t mean that belief in God, and for us in Jamaica, espousal of the Christian tradition by majority are bereft of a beautiful, vital, and, for most of us, an indispensable praxis of reason and faith, giving existence sublime meaning and purpose. It leads to a way of life which is absolutely essential to the nation’s future.

Despite what Dr Alfred Dawes calls “a soured religious tonic”, the story of Jesus’ life of utter generosity and commitment to the weakest, from which none are excluded; the stories and lessons from the Bible and the Christian culture of aspiring goodness, evident enough of our history to be still credible, remain the only metaphor which can convert more Jamaican hearts and lead persons so convicted to the political engagement and actions which could revolutionise our institutions from the flaccid, value-compromised, advantage-taking, low-productivity model of our Independence experience.

Think more about the alternatives. We rebelled against slavery and empire. We could never even swallow the first taste of dialectic materialism served up two generations ago. Because of shallow roots, secular humanism and irreligious liberalism prove brittle, shallow, and eventually intolerant. The materialist consumer ethic which we have lurched into causes such unstoppable inequality that everyone lives in fear. What a prekkeh!

My utilitarian conclusion then is that this fallen Garden of Eden needs a revival of elemental Judeo-Christian values – vital traits like truth, honesty, tolerance, commitment in personal relationships, RESPECT, economic fairness, political comity, and more. Without these, we ain’t going anywhere other than where we are – a profoundly disturbed society, troubled by its self-imposed internal injustice.

Where that happens, people turn to titivation, become Lamming’s mimic men, destroy their souls and probably their bodies with anaesthetic of all types; hug up some messianic figure, descend into deviance or just go crazy. (Remember the truth Fred Hickling told us about ourselves!)

With all their warts and failings, religious societies who preach, by practising, the simple, integral virtues of the Judaic tradition and the Christian gospel can, humbly and without taxing the congregation for two houses in Ironshore and the like, show the way to abundant, unexploitative life, here and beyond, for all.

The potential of a true liberation theology led the American state to actively promote the fragmentation of denominations and the subsidisation of fundamentalist religious practice throughout our region, just as the Roman emperors did with the Church in the post-apostolic age. The empire had to react now as then. The Christian message involves holy subversion.

For economic clientilism and other prestige and convenience; in fear of the persecution of the Cross which he told his followers to be prepared to carry, some of us church people have sold out Jesus, the champion of public righteousness and lover of equity (not law!), raiser of the dead, on the pagan altars of money, secular preferment and other Molochs and Baals. Respectability and prominence (which, by the way, Jesus neither craved nor achieved) become our too-small gods.

No wonder that some predict that Jamaica will be largely atheistic by 2040. And were that to be so, I ask again, what then would be the foundation for the discipline, sacrifice, hope, struggle, bonding, without which a prosperous polity is impossible?

The first thing people of religious faith must do is to depress the inter-denominational scorning, show real respect for each other, and give programme, activism and engagement to the weak umbrella group of churches, also to the cause of effective education and sturdy value revival.

For God’s sake, can’t we even advocate an abatement of the crony capitalism which is impoverishing us, or the scared squandering of God’s children by continuing, unnecessary school closure!

Many of us in the churches are so servile and dependent on the State that not even Herod, or Pilate, would consider us as enemies of their patently unjust status quo. Do we think that the Man of Galilee, in whose shoes we are to walk, and who is – not any modern Caesar – Lord of all, would consider $10,000, to be dashed at some of the poor, a righteous sharing of the fullness of the Jamaican earth? Or that nurturing a spirit of idle entitlement or careless low productivity is compatible with the Christian message?

At the best of non-pandemic times, probably only a quarter of our children go to Sabbath or Sunday school. Absent that, do you think they are learning serviceable values from their deep immersion in Instagram or TikTok?

People of faith and goodwill, in the embarrassing confronting of historic failures, and facing the disease of what is reported to have taken place in Montego Bay recently, may the authentic ‘ChristMan’ of the Gospel inspire individuals and religious institutions to offer renewed and urgent service to uplift national values.

Francis of Assisi, in an age when the Church was as ‘bruk-down’ and compromised as now, counselled us to preach always “using words only when necessary”. Leave out the formalism and fussiness which deflects from the substance and breadth of the Saviour’s very human and very divine message.

After all, isn’t the kingdom of God the flourishing of humanity and all creation?