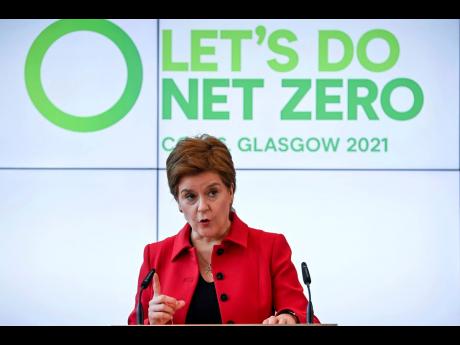 AP
Scotland’s First Minister Nicola Sturgeon delivers a keynote speech in the Technology and Innovation Centre during a visit to the University of Strathclyde, Glasgow, ahead of the United Nations COP26 climate conference.

“Science has made it clear that the Earth is fast approaching its tipping point of climate disaster and, as the next generation who are already bearing the brunt of climate impacts, we are immensely dissatisfied at the pace and scope of climate action locally, regionally and, most of all, globally … . We, therefore, ask that leaders around the globe commit the necessary resources, financial and technological, to accomplish what is needed to mitigate, adapt and respond to loss and damage.” – taken from statement by the Caribbean Consortium of Youth Organisations, August 2021

At the UN General Assembly in September, the UN Secretary General, António Guterres, sounded the alarm about the crises, including climate change, facing the globe which require urgent attention. In my recent articles, I have pointed out that recovery and transformation require addressing all the interconnected issues, which are to be found in the UN 2030 Sustainable Development Goals (UN SDGs), including trade, development issues, environmental degradation, health, financing and climate change.

The 26th Session of the Parties to the UN Framework Convention on Climate Change (UNFCCC) will be held in Glasgow, Scotland, starting on Sunday, October 31. Delegations from the member states of the Caribbean Community (CARICOM), to be led, it seems, by heads of government, are already enroute to Scotland, as this will be an in-person meeting under COVID-19 protocols. CARICOM has been in preparatory mode since May, with the support of the Caribbean Community Climate Change Centre located in Belize and the CARICOM Secretariat in Georgetown, Guyana.

Recognising the critical importance of COP26, CARICOM has been working to fine-tune its positions and priorities to enable strong participation as a regional group. To this end, I understand that a regional declaration was prepared. CARICOM will also be working in alliance with other members of the group of Small Island Developing States, (SIDS), which face great risks from climate change, such as increasing temperatures, more frequent and powerful hurricanes, longer droughts, severe flooding, sea level rise, and wildfires in some countries. The aim has also been to ensure the participation in the preparatory process of a range of stakeholders, including the youth and the private sector. Sweden’s Greta Thunberg has certainly led the way in mobilising the world’s youth.

As background, the UNFCCC, like the Convention on Biodiversity, resulted from the 1992 Rio Earth Summit. It became effective in 1994, 27 years ago. The implementation of the UNFCCC began in 1997 with the adoption of the Kyoto Protocol. In 2016, the second implementation instrument, the Paris Agreement, was adopted. Among other things, it set targets for nationally determined contributions for mitigating global warming.

Climate change is very much linked to international trade and thus should have the full engagement of the private sector. Climate change, however, is not formally addressed as a subject in the World Trade Organization (WTO), although there is a Committee on Trade and the Environment. There has been reluctance in the WTO to negotiate trade and environment disciplines. Recall that trade and environment standards were introduced into bilateral and plurilateral trade agreements.

In 2009, the WTO and UN Environment Programme (UNEP) produced a report on ‘Trade and Climate Change’ to give an overview of the link between both. There was no agreement among WTO members to have climate change in its work programme. Nevertheless, climate change measures and policies interact with WTO rules and regulations, as it is felt that liberalising trade could help in mitigation and adoption, while national measures could conflict with WTO rules and affect international trade.

There are two sets of discussion in the WTO which are relevant to climate change. These are the negotiations on liberalising trade in environmental goods and services, and the relationship between multilateral environmental agreements and WTO instruments. I do not see where discussions on these issues have advanced significantly. It is evident that specific climate change issues are broached in the WTO Committee on Trade and Environment.

Some members, such as the European Union (EU) and Canada, have started discussions covering trade, environment and sustainable development, but there seems to be limited traction so far. The WTO will be monitoring discussions at COP26 and it can be expected that climate change issues, in some form, will be raised at the 12th WTO Ministerial Conference (MC12) scheduled for the end of November in Geneva, Switzerland. CARICOM members, with the private sector, should be considering how climate change will impact trade in goods and services in terms of production and market access.

For COP26, it seems that among the major issues for CARICOM will be financing for adaptation, loss and damage, and commitments to increasing contributions to the Green Climate Fund. Our hope has to be that the heads of government and ministers assembling in Glasgow will have the will to heed the warnings and take the hard decisions needed to address the climate change crisis facing humanity. The youth will be watching.