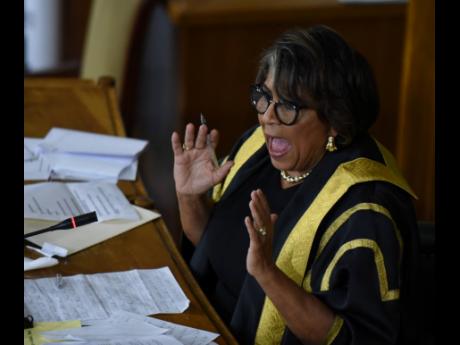 Speaker of the House, Marisa Dalrymple-Philiber

Having been embarrassingly lectured by the Integrity Commission on what the law says about when and how it discloses its investigations, the Speaker of the House, Marisa Dalrymple-Philibert, is morally bound to reverse herself and instruct the transport minister, Robert Montague, to answer the Opposition’s questions about the controversial purchase of stocks in the investment company, First Rock Capital, by the Airports Authority of Jamaica (AAJ).

At the same time, when the House convenes for its weekly sitting tomorrow, Delroy Chuck, the justice minister, who ought to have known better, should apologise for having encouraged the Speaker in her latest folly. Mr Montague, meanwhile, must come to the meeting with the answers to the questions.

None of this, of course, is likely to happen despite the implicit guidance from the Integrity Commission’s chairman, the retired president of the Court of Appeal, Seymour Panton. Obduracy and cantankerous petulance will probably be the posture. For the original act was not grounded in high ideals or principle. Its aim was to defer, if not prevent, political embarrassment.

In this regard, Speaker Dalrymple-Philibert’s stewardship of the House has again been found wanting – either because she has allowed herself to be pinned by Government colleagues to party/political interests, or she genuinely lacks the skills to elevate herself above narrow partisanship. Or she does not possess the wherewithal to grasp the precepts upon which the speakership, and operations of Parliament, are founded. Or it could be all of the above.

Speaker Dalrymple-Philibert’s handling of the George Wright censure motion, as bad as that was, might have been forgiven as overzealousness borne of inexperience. But her ruling – later retracted – against members’ automatic right to demand, and get, divisions after voice votes suggested a pattern. And now this.

Last week, rather than answering the questions about the AAJ’s share purchase, Mr Montague asked for a delay because, he said, the matter was being ‘reviewed’ by the Integrity Commission. Mr Chuck was in fully-throated support. The Speaker readily acquiesced. Neither said how they knew the commission was investigating – the word they used – the deal.

It was left to Justice Panton – and many other people – to remind Dalrymple-Philibert, Chuck and Montague that Section 53(3) of the Integrity Commission Act, for which they all voted, precluded the commission from announcing, or speaking about, investigations until they are done and reports tabled in Parliament.

“No such report has been tabled,” said Justice Panton, with respect to the AAJ-First Rock matter. In other words, since there is no information from the commission about an investigation, or any basis to argue that the case is sub judice, then there are no impediments to Mr Montague answering the questions. Moreover, as Speaker Dalrymple-Philibert will no doubt on reflection - in the absence of intellectual finagling – concede, doing so won’t offend the Standing Orders.

“Elementary, my dear Watson.” As it should have been to Speaker Dalrymple-Philibert and Messrs Montague and Chuck. Unless the motive was other than what is derived from altruism and logic.