Kristen Gyles | Crime-fighting and policing: You get what you pay for 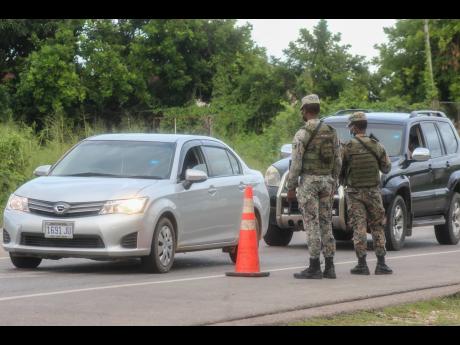 Ashley Anguin
Members of the Jamaica Defence Force at a checkpoint in Greenwood, St James, during the state of public emergency.

Every now and again, like many, I experience bouts of disgust while watching the news and hearing of some of the most heinous crimes known to mankind.

Jamaicans are cultured to think that as a nation, we are especially vile and wicked. We have all at some point heard the contrast made between Jamaica being the so-called murder capital of the world and our simultaneous world dominance in church attendance, given that we have the greatest number of churches per square mile. As ironic as that may be, I doubt there is any link between the two realities, though it may be tempting to conjure up one.

I agree that there is a lot we can do socially to stymie what, in many parts of Jamaica, is an actual culture of crime. Children in many communities grow up hearing and talking about crime like adults talk about the weather. It’s small talk. Nothing new or out of the ordinary. That reality, constantly being observed and experienced – especially as it is reiterated through some of our music – further helps to reinforce the criminal culture. But, what breaks the cycle? The truth is that a culture of crime won’t exist for very long if every time a crime is committed, someone is caught and held to account. The culture would eventually die.

Our damnable crime culture is therefore partly fuelled by poor security systems and policing. We might have grown to expect meagre returns on our security forces’ crime-fighting efforts and as a result, there is no great surprise when crime flourishes.

Are Jamaicans worse than any other set of people? I doubt it. One thing can be said about the countries with the highest crime rates. They are predominantly poorer countries with less than impressive investment towards the country’s internal safety. Corruption is also a generally recurring theme. Just like it is here.

To cut to the chase, when I listen to the frequent pleas of the Jamaica Constabulary Force for better working conditions and decent pay, I can’t say I’m surprised that our crime rate is off the charts. It is ridiculous for us to expect our policemen and women to jump out of bed with freshly renewed zeal every day to fight crime like Power Rangers, when they have to be making appearances on the news every few weeks to complain about low pay and poor working conditions.

Earlier this year, a news report came out about male and female police officers at the Glengoffe Police Station have to share one bathroom. The bathroom had one shower and the toilets couldn’t flush properly, so the officers had to be carrying buckets of water into the one bathroom to flush the toilets – what a mess. The police were also complaining of a rat infestation problem.

Similar complaints came from the Kingston Central Police Division headquarters last year. And there were complaints from other police stations, pretty often.

The same police officers are expected to now overextend themselves for the newly reimposed states of emergency. They are now complaining of having to work overtime to make the states of emergency work. But in reality, what we have, depending on the time of the day, is a bunch of tired and overwhelmed officers dying to go home. (That will scare those criminals!) Just like nurses, we expect police officers to play the role of superheroes, every day, while we treat them like they are anything but.

The interesting thing is that we employ states of emergency and other flashy-sounding crime-fighting tactics to curb crime ever so often, not realising that the resources apportioned to these tactics, if used to contribute towards meaningful compensation and better working conditions for our officers, would perhaps yield far greater dividends. You get what you pay for. It’s the sad but rather fair reality.

To continue the point, we clearly need more security personnel on the roads as well. Interestingly, a 2018 ranking of the top 30 countries, based on the number of police officers per capita, somehow has the top 10 most murderous countries conspicuously missing. Go figure. If we lack the manpower on an ordinary day to facilitate effective crime-fighting, how will we not lack the manpower during a state of emergency? But who on earth would want to join a police force that pays them peanuts in exchange for putting their life on the line?

Within the context of an over $850- billion annual Budget, national security, the most pressing national issue right now, seems to have been apportioned less than 10 per cent of the total. Jamaica has a unique crime profile. We have, unsurprisingly, one of the highest rates of reported crime of any kind across the entire world. But our ‘prestigious’ ranking shoots up from number 10 to number two if we only consider murders. We had 1,301 murders in 2020 – a murder rate of 46.5 murders per 100,000 citizens.

In the face of a crisis, priorities must be established. Crime has been stifling our economy through its negative effects on tourism and foreign direct investments. Murders, assaults and rapes have been putting added pressure on the healthcare system and has been creating disruptions to the learning process for many students. Crime quite literally affects everything, so it shouldn’t be hard to justify an increase in salaries and improvement in working conditions of essential workers, at all costs.

Some would say money squandered on anything without a clear plan is money wasted. And ‘some’ would be right. But, quite honestly, even with no change to the seemingly ineffective crime-fighting tactics, increasing remuneration and improving working conditions of our police officers would empower them with a greater sense of dignity and purpose, than to spend valuable time harassing market vendors and trimming people’s locs.

Kristen Gyles is a graduate student at The University of the West Indies, Mona Email feedback to kristengyles@gmail.com.