Peter Espeut | No peace without justice 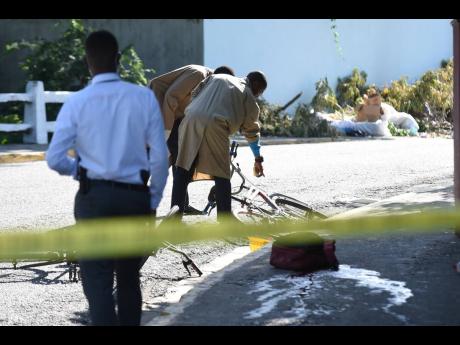 Kenyon Hemans
Police officers are seen processing a crime scene on North Street at the intersection of Central Avenue, where two men were shot dead. Violent crime (and inequality) has increased steadily since independence, and no government of any colour has taken a holistic approach to addressing this problem.

Whatever plans the Government has to deal with crime in Jamaica – in particular lethal crime – are not working. The zones of special operations (ZOSOs) are a failed strategy, having failed to either clear, hold, or build – especially build. The...

Whatever plans the Government has to deal with crime in Jamaica – in particular lethal crime – are not working. The zones of special operations (ZOSOs) are a failed strategy, having failed to either clear, hold, or build – especially build. The declaration that the sheer quantity of crime across Jamaica constitutes a “public emergency”, requiring the declaration of states of public emergency (SOPEs) in seven police divisions in five parishes, is an admission that crime is out of control. If the Government has a comprehensive anti-crime plan, it is not working.

This is not a partisan observation. Violent crime (and inequality) has increased steadily since independence, and no government of any colour has taken a holistic approach to addressing this problem. I get the impression that those who benefit from politics would love to be able to reduce violent crime so that they can get on with the business of enriching themselves.

“There can be no peace without justice” goes the song; “Justice is another name for peace” goes the saying. Jamaica is a profoundly unjust society, with an apartheid education system, and where social and economic benefits are distributed along ethnic and political lines. I doubt whether we will ever achieve low crime rates in Jamaica while maintaining our high levels of political corruption and social inequality.

The normal operation of any justice system anywhere in the world must have (1) an open system where citizens feel free to report incidents of crime; must have (2) detectives and forensic resources able to catch the culprits; must have (3) the legal acumen to take the crime producers to court where the guilty can be convicted; and (4) must have correctional arrangements where miscreants are punished, yes, but also rehabilitated to make a positive contribution to their families and their nation.

Which of these in Jamaica is well done?

In addition to the above, laws must be placed on the books that are (1) fair, and (2) that make procedural justice available to all; (3) that facilitate the detection and conviction of criminals from all classes; and (4) that make it easy for politicians and the well-connected to be exposed and held to account for their stewardship or lack thereof. The fact that ackee thieves are more likely to be hauled before the courts than those who breach procurement or contracting guidelines is both unjust and immoral. Politicians are notoriously slow to pass laws which will detect and prosecute political criminality, an inherent conflict of interest which is hard to surmount.

In fact, our “culture of official secrecy”, embodied in our laws (enacted by politicians) make it difficult for political corruption to be discovered because political donations and the assets of public servants – information which may reveal graft and illicit enrichment – remain secret. Allowing notorious political corruption to remain largely undetected and unpunished may work against the goal of reducing murders and assault.

Research has shown that the greatest deterrent to murder (and violent crime) is not the prospect of hanging, but the likelihood of being caught. This also applies to traffic and environmental crimes. If I can ride my motorcycle past police stations and checkpoints without wearing a helmet, then I have no incentive to wear one. If the police cannot use their eyes to detect motorcyclists without helmets (which requires no brains), how are police detectives going to find, get the evidence, and arrest extortionists, car-stealing rings, and hit men?

NO CULTURE OF ENFORCEMENT

The fact is that we do not have a culture of enforcement in Jamaica that would arrest polluters, litterers, persons who fish without licences or chop down trees in forest reserves. What we have is a culture of the ‘bly’, especially when the palm is greased. Therefore, people will continue to break all the laws they can because they believe they will never be caught.

The rank and file of our security forces are drawn from the poorest and least educated in our society; their low level of emoluments and the low social status awarded them ensure that this will remain so for the foreseeable future. This, of course, suits the lawbreakers, who, no doubt, are smarter than the average policeman.

Throughout history, the elite (the officers) have always sent the lower classes (the rank and file) into the heat of battle where casualties are highest.

I am not sure that our rate of detectable crime will decline any time soon with only lightly literate investigating officers. An effort was made some time ago to attract into the police force persons with university degrees, who would be rapidly promoted; this was resisted by the rank and file. Efforts were made to recruit senior Scotland Yard operatives into our police force; the perception is that the detection of crime improved, but that corruption in the force and the political directorate reduced their effectiveness.

If we want to send away our senior crime bosses and Don Gorgons, matching their firepower is not enough. If we want to reduce violent crime in Jamaica, we are going to have to increase the brainpower in our police force, which will mean paying more to attract persons with higher degrees. If we want to detect political bribery and graft, and to prove the link between politics, gangs and gunmen, we need smart policemen who are actuaries, and who can ferret out intelligence, and catch the Mister Bigs.

Reducing violent crime in Jamaica requires skilled policymakers who will improve education, streamline urban planning, and make sure the benefits of economic growth are spread more evenly across the different social strata. Honest politicians must open themselves to deeper scrutiny, so as to weed out the charlatans and opportunists. And let the chips fall where they may.

And with justice will come greater social peace.