Editorial | Compromising with the police 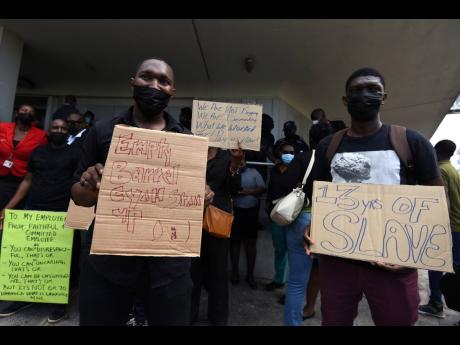 Kenyon Hemans
Police officers stage a peaceful protest on the steps of the Supreme Court to demand payment of overtime that is currently owed to them from 2015. The officers will return to court on December 16.

We take it as a good sign that the Police Federation, the union of rank-and-file cops, has, over the past week, largely gone quiet on their money dispute with the Government. The assumption is that they are negotiating.

When people are around a table talking, each genuinely listening to the other, the likelihood of compromise and of things not accidentally falling over the cliff improves. Over the precipice is where we feared things were headed a week ago when hundreds of police officers demonstrated outside the court buildings in downtown Kingston demanding payment for working overtime, going back over a dozen years.

There were also hints of the police taking industrial action, perhaps by reporting ill. Before last week, the atmosphere was already highly charged, with aggressive public posturing by the Federation’s chairman, Rohan James. No one was as tougher than the police, Corporal James, warned the Government in a recent speech.

Given the threat police strike posed for the country’s security, it was important, and urgent, that the national security minister, Horace Chang, and Nigel Clarke, the finance minister, who controls the purse strings, moved to de-escalate the situation. That is what we hoped happened.

But cooling the immediate threat and getting the Federation around the table would only be the first step, a precursor of a frank discussion about the state of the Government’s finances, what, reasonably, police officers could bank on in the next pay cycle, and what should be the legitimate demands of Jamaican taxpayers in return.

ACKNOWLEDGING DANGERS ON THE JOB

We start by acknowledging the dangers Jamaica’s police officers face on the job, and that they are generally underpaid for the risks they face. There are, however, two separate, though overlapping issues at dispute between the Police Federation and the Government.

As we understand the more immediate one, police officers, like other employees, are contracted to work for 40 hours per week (normally eight hours a day), after which they are to be paid overtime. But by some quirk, for over more than a dozen years, between 2008 and 2021, police officers were not being compensated, or properly so, for their overtime work. The Federation calculates that its members are, on average, each owed around J$3.2 million, which would put the overall ball at close to J$30 billion.

It is not clear how this failure to pay occurred and why no one, especially the people who were missing out on their compensation, caught the error before 2019. Or if they did, why weren’t they more forceful earlier on in demanding their money.

As it turned out, the police took the matter to the court in May 2020. In the meantime, they continued to negotiate for a settlement. The Government’s most recently publicly announced offer was for the police to forfeit any compensation for the period prior to 2019, The Government would instead pay for the period between 2019 and 2021 over six years. The Federation had insisted that its members be paid from at least 2015. At this calculation, each eligible person would be entitled to around J$1.63 million.

It is important that a settlement be reached, and that it takes into account the fiscal constraints faced by the Government, especially in the context of the economic downturn caused by the COVID-19 pandemic. There should also be an appreciation that the people who are owed are not without fault. They had an obligation to know what they were entitled to, and what they were being paid. At the same time, settlement over six years is on the face of it untenable.

The second issue has to do with the four per cent salary increase the Government offered to public servants, which has far rejected by the rank and file police. This increase is for a single year, which means that new salary negotiations are on the near horizon. In that event, we take it that those negotiations will take into account the broad public job reclassification conducted for the Government by outside consultants.

Minister Clarke previously held out these reclassifications as being potentially transformative for the public sector, which, we suppose, includes the police. He should, therefore, as part of these negotiations, share those findings with the police, or at least the section dealing with their circumstances. That would be the basis of a frank and honest discussion – and hopefully, an early settlement.

Accepting a lower pay offer now may not seem too bad if things are going to improve in relatively short order.