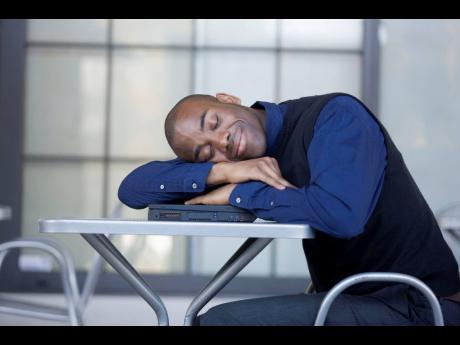 ClipArt
Perhaps the most common problems among young to middle-age working adults are musculoskeletal, experienced because of inordinate hours spent working from home.

There was a time when telecommuting and extramural classes were not the norm. Then came COVID-19 and there was no longer safety in numbers. In fact, there was danger in numbers and the need for us to distance ourselves from others became a necessity.

Fortuitously, we have the technology to perform most work and school activities many kilometres away from the source. That being said, I am reminded of the son of a friend who was fired from his job for habitual lateness. He lived in the Bronx and the office of his job was in Long Island. He was late for work so often that he received several verbal, then written warnings. Eventually, when all else failed to galvanise him into getting to work on time, they were forced to fire him. The interesting thing about this story is that, in order to get to work, he had to go from his bedroom to his living room, which was only a few steps away.

Working and studying from home require self-discipline. Sadly, since this pandemic arrived, several businesses have laid off several workers and heaped work on the rest. Consequently, I constantly get complaints about ‘home work’ being more difficult than working in the office. More hours are usually spent at (home) workstations than usual. Schoolwork tends to be more difficult because of the impersonal nature of the thing and the inability to receive special assistance from a teacher far away, with a monitor of faces for a classroom.

Many children are unable to focus under those circumstances, and virtual truancy is fairly common. The grades of students tell the troubling tale of woe for our education system. Humans are social creatures, and children need interpersonal connections to achieve full character development. I wonder what will happen to our society when the children of the age of COVID-19 come into their own and must take the reins of leadership. Will their educational and intellectual development be up to the task? Will their emotional development allow for sympathy and empathy, the things needed to become good leaders? Will they be able to connect with others without perceiving them as a bunch of living pixels?

Things were already going bad for those people who sit together at a gathering, but lose themselves in their electronic devices, simply called ‘cell phones’ although that is the least of their functions. People are often a part of a group physically, but apart from the group cerebrally and emotionally. This makes for a cold society, incapable of the warmth that humans need to truly become whole. The advent of ‘tele-everything’ may appear cool, but it heralds the beginning of an emotional ice age.

Although we can’t seem to agree on much, we need physical interaction to fulfil our innermost desire of ‘happiness’. I am seeing far more depression among the elderly than ever before. I am seeing rapid physical and mental deterioration of the elderly who have been forced to curtail their trips out of the house and their meetings with their peers. The isolation is literally killing them. And, the longer that the selfish, obstinate and careless among us allow this plague to drag on and on and on, the more the soul of our society will cool and shrivel and die, bit by bit.

Perhaps the most common problems among young to middle-age working adults are musculoskeletal, experienced because of inordinate hours spent working from home. Working from home forces us to sit in one position for many hours at a time. Loads of assignments and added responsibilities lead to people being hunched over keyboards and staring at computer screen for far longer than anyone should.

Usually, there are no ergonomic chairs and desks in homes; people plop down in soft couches and put their laptops on their thighs, hump their backs and crane their necks to work for hours on end. Some sit at the dining table, which was not made for computer work, or worst yet, on the bed or on the floor with a hassock for a table. All these positions put pressure on the structures in the spine. Interspinal discs, especially those desiccated by the ageing process, are pressed towards the sensitive spinal cord and many nerves running to and from it through foramina. The ligament traversing the length of the spine, inside the canal, becomes thickened and narrows the lumen meant for the spinal cord and nerves. Joints, external ligaments, tendons and muscles, associated with the spine, all deteriorate much more rapidly than they would under natural circumstances.

Consequently, we are seeing more neck pain, lower back pain, disc problems, arthritic spines, weak core muscles and pain radiating down upper and lower limbs than usual. These problems are turning up in young people. Other issues like difficulty with weight control, deconditioning, cardiovascular problems, diabetes, anxiety and depression in younger, (home) working-class individuals are turning up.

It’s best to set up a proper (home) workstation. Better yet, have a standing desk (if possible). Take breaks every 30 minutes – stretch and walk around. Stare far away to rest your eyes. Take ‘lunchtime’. Exercise about five days each week. Try to eat healthily, drink lots of water, and take mental breaks from stress.