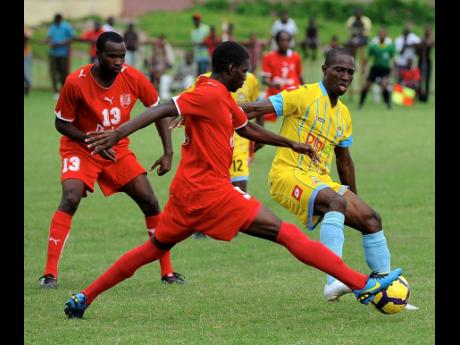 File
The JFF should concentrate on developing home-grown players, wherever they are currently playing, and facilitating players’ transition from junior to senior football.

In the First Division, I gravitated towards Tottenham Hotspur because of Jimmy Greaves’ dazzling play. Except for a short detour to Liverpool (1987-1997), thanks to Johnny Barnes, I’ve stuck with Spurs through Greaves, Glenn Hoddle, ‘Gazza’; Gary Lineker; Gareth Bale, and now Harry ‘Augustus’ Kane (work it out, it’s comic) with the same tortured patience I perfected as a Chicago Cubs fan. But, lest we forget, in 1963, Spurs won the European Cup and, in 2016, Cubs won the World Series after 108 years!

But, whenever I’m asked what’s my favourite football team, my answer is Boys Town! Today, most Jamaican youth can’t name many Jamaica Premier League (JPL) players, but can talk in exquisite detail about Chelsea, Man U, Liverpool, etc, while worshipping a player without a win on a world (not regional) stage appropriately named Messi.

The Old Ball and Chain’s three terrors are no different, despite my herculean efforts to book them travel tickets on Tardis with Dr Who to watch Boys Town, Santos or Cavalier play in the 1970s, and see Jamaican football’s glory days under legendary Brazilian Coach Jorge Penna. If CONCACAF had 3½ World Cup places in 1966, Jamaica would’ve been an automatic qualifier.

When I implore youth to stop referring to any English Football team as ‘we’ (an unrequited colonially-imposed intimacy) and to support more local football, they ask me, “So what should we watch? You watched Allan ‘Skill’ Cole; Frank and Karl Brown; Neville Oxford, Henry Largie; Herbert ‘Dago’ Gordon; Jackie Bell; Dennis Ziadie; and legends like Syd Bartlett; N. A.D. ‘My Son’ Tappin; and Lindy Delapenha. Who do we watch?” It’s a rhetorical question. Today’s local footballers are as virginal as West Indian batsmen who bat but can’t score.

I don’t care what was accomplished in 1998. Jamaica’s best football was played during the 1960s and 1970s, when we focused on locally produced talent. All we lacked (post Penna) was discipline – a coaching failure. Michail Antonio’s all-world goal against USA notwithstanding, we’ve been misguided into begging players unable to get into other international teams to play for Jamaica part-time. It’s a waste of time and resources. JFF should concentrate on developing home-grown players (wherever currently playing) and facilitating players’ transition from junior to senior football. That’s how we’ll produce teams with motivation to do well for Jamaica and events like 1998 can be sustainable, instead of one-off miracles.

Talent is dime a dozen. Motivation, not so much.

WHAT DO THE PEOPLE WANT?

Politics is no different. Visionary leaders like Busta, N.W., Joshua and Eddie knew Jamaica needed foresight and creativity, not slavish imitators, but recent politicians are all about political advantage. So conversation’ about Republican status focuses on how politicians choose local symbols that mimic current foreign symbols. The power-seeking conundrum delaying Republicanism for decades is whether a new symbolic-only King or Queen should be selected by two-thirds majority of each House separately or jointly.

This is another JFF-style waste of time and resources! Nobody is asking whether WE THE PEOPLE want symbolic or executive leadership; or how WE THE PEOPLE should choose that leadership. Politicians are obsessed with how THEY can be the ones to do the choosing.

Has anyone asked if WE THE PEOPLE want a Head of State plus a Head of Government? Can WE THE PEOPLE afford two heads? Usually, only snakes and Westminster-style governments have two heads. Owls and true Republics have one. Do we want snakes faking governance for another 60 years? Or do we want the wisdom of Owls?