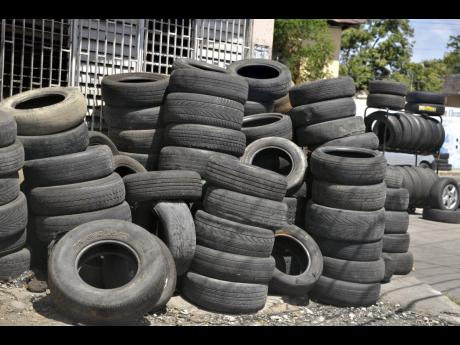 After more than three years of discussions and, we expect, technical analysis, it was announced last month that the Government and the Caribbean Cement Company Limited (CCCL) had signed an agreement for CCCL to utilise tyres from the Riverton City landfill in Kingston, to help fire its kilns for the manufacture of Portland cement.

That, on the face of it, is good news. The project could be the beginning of a solution to a major problem that affects landfills around the world: what to do with the millions of tyres they receive each year. And it is estimated that there are more than two million of the stuff at Riverton. There are more at other landfills across the island. They are also dumped in rivers and gullies, fields, and on the sides of roads. Old tyres are an environmental hazard.

Generally, when tyres are incinerated, they release toxic gases that are bad for human health and the atmosphere. For not only do the contaminants released impact health, their effects on the atmosphere contribute to global warming and climate change. It has, however, been implied that this won’t be exactly the case at CCCL. Their project is part of the company’s process, it seems, of reducing its carbon footprint in Jamaica.

In that regard, it would be useful for CCCL and the National Environment and Planning Agency (NEPA) to share, in easily digestible language, additional technical and scientific information about this project, including if, and how, it integrates with other initiatives to reduce the company’s CO₂ emissions. CCCL should also place this information in the context of the plan by its parent, CEMEX, the world’s fifth-largest cement company, to reduce its emission of greenhouse gases by 40 per cent, by 2030. CEMEX intends to have net zero emissions by 2050.

It is time, too, that the National Solid Waste Management Authority (NSWMA), which operates the Riverton and other landfills, and the Government, provide updates on the years-old plan to divest the Riverton landfill, as well as to use ground tyre rubber (GTR) in asphalt for road construction. Should this idea still be on, does Jamaica generate sufficient used tyres to supply the demands of this venture and the CCCL scheme?

With respect to the CCCL project, however, and its possible effect of lessening the company’s carbon emissions, this newspaper, unless shown outcomes, welcomes it.

The manufacture of Portland cement is an extremely energy-intensive process. Kilns operate at over 1,650°C (3,000°F), which are mostly heated with fossil fuels. This emits huge amounts of carbon dioxide into the atmosphere. Limestone, a key ingredient in cement, also gives off large amounts of carbon dioxide equivalent (CO₂e) during its transformation to clinker. Indeed, there is an almost one-to-one ratio between the amount of cement produced and the greenhouse gases emitted in its manufacture. The industry accounts for around five per cent of global emissions, second only to steel in industry.

Cement companies, as part of their declared commitment to keep the rise in Earth’s temperature to below 1.5º Celsius by the end of the century, are experimenting with their energy mixes, including, as CEMEX has been doing, offsetting some of their fossil fuels with renewables. They have also strained for production efficiencies and alternative inputs that require less energy to transform. Burning tyres has the advantage in that the ash mostly has good properties for cement production.

Cement’s energy fix has, in some instances, involved substituting up to 30 per cent of fossil fuels for tyre-derived fuel (TDF). Burning one kilogramme of tyre in a cement operation is equivalent to using 0.86 litres of oil for the generation of a unit of heat, research data show. Experts also say that the very high temperature at which cement kilns operate means that the toxic substances in tyres burn out before they reach the atmosphere – a point made by CCCL officials when the idea of their use was floated in 2019.

While dozens of cement plants in the United States, and, notably, some in Iran, have adopted this technology, last May, New York state environmental authorities revoked a permit for a cement plant in the state’s Green County to displace up to 20 per cent of its fossil fuel used to fire its kilns with TDF. The facility, they said, lacked the technology to burn TDF. This is a matter on which, with respect to Jamaica, CCCL and NEPA must reassure people.

Meanwhile, the NSWMA might indicate whether there is still interest by Jamaican investors to establish a facility for combining GTR with asphaltic substances for road construction. In the six years since the NSWMA was hot on that idea, and was suggesting that it was close to a deal for supplying the old tyres, the technology, including the energy efficiency of such systems, has improved. The question is whether it has done so enough to make economic sense, from a financial and carbon footprint standpoint, for Jamaica to be involved. For there seems to be no question that roads covered with asphalt mixed with GTR stand up better, and are better for vehicles than those covered with asphalt only.

Further, in 2019, the Government, with much fanfare, named a nine-member enterprise team to lead the divestment of the Riverton City landfill to investors who would develop a waste-to-energy plant, as part of Jamaica’s strategy to lessen its dependence on fossil fuels. Since then, the crisis of global warming and climate change is better understood, as are the technologies for turning waste into fuel. What in Jamaica has become cloudier is the feasibility of such a system at Riverton, and if the proposal is dead.