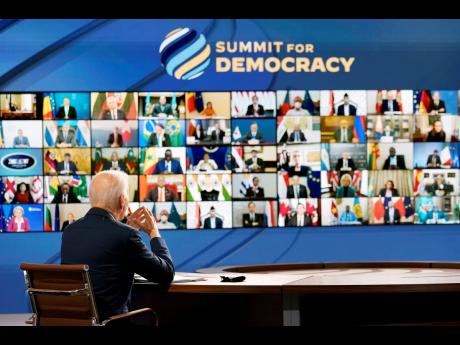 AP
On December 9-10, 2021, US President Joseph Biden hosted a Summit for Democracy to which countries in Latin America and the Caribbean were invited.

“Our hemisphere is at a critical inflection point” – Senator Bob Menendez (D-NJ), chairman of the US Senate Foreign Relations Committee (Hearing on Latin America and the Caribbean, November 2021).

My article last week dealt with the CARICOM-related foreign trade policy agenda for 2022 affected by COVID-19 and its variants. In looking at the trade-related meetings scheduled in the western hemisphere, I omitted one, the 9th Summit of the Americas which the United States of America (USA) offered to host. The chair of this summit was transferred to the USA on July 10, 2020. The summit was originally scheduled to be held in April 2021. I reference my article of September 30, 2020 on ‘Relations within the Western Hemisphere’. Although there is information on the US State Department’s website about this summit, I note that a date has not been given.

The Summit of the Americas has its genesis in the Enterprise for the Americas Initiative launched by Republican President George H.W. Bush (1989-1993) in June 1990. It was aimed at promoting free trade and investment in the hemisphere and providing debt relief. President Bush was a champion of free trade, when it was a policy of the US Republican Party. This initiative gave rise to the North American Free Trade Agreement (NAFTA) and the Free Trade Area of the Americas (FTAA) proposal.

President William (Bill) Clinton (1993-2001) inherited NAFTA and the FTAA, and instituted the Summit of the Americas. The summit became a regular meeting held every three years aimed at promoting dialogue among leaders of OAS member states, except Cuba, and to promote free trade and democracy. The first summit was hosted by President Clinton in Miami, Florida, December 9-11, 1994. The now suspended FTAA negotiations were launched there.

From the 2001 summit held in Quebec, Canada, the Declaration of Quebec City states that important criteria for participating in these summits are the maintenance and strengthening of the rule of law and strict respect for the democratic system.

You should note that, with a US policy modification, Cuba participated in the 2015 summit held in Panama, which was attended by President Barack Obama. Although a Cuban delegation attended the 8th summit held in Peru in 2018, it was within the shadow of a policy reversal by President Donald Trump, who did not attend. The USA was represented by Vice President Mike Pence.

In 2004, Venezuela’s President Hugo Chavez, challenging the USA, established the Bolivarian Alliance for the Peoples of Our Americas (ALBA) to rival the FTAA. To further promote Latin America and Caribbean unity, Chavez joined Brazil and others in forming the Community of Latin American and Caribbean Countries (CELAC) in 2010. Cuba is a member. With his death in 2013, Venezuela sunk into political instability and has become a difficult issue in the OAS, CELAC and CARICOM.

THE SITUATION OF DEMOCRACY

As stated in the Quebec Declaration, those attending a Summit of the Americas must be strong proponents of the democratic process. Well, democracy is now under stress in many countries in this hemisphere, including in the USA. The question now posed is whether the USA, the exponent of democracy, can itself retain its democratic system, especially after the January 6, 2021 attack on Congress and in its aftermath?

The USA is now listed in international indices as a flawed democracy along with others in Latin America and the Caribbean. The USA is seen as backsliding. Some would argue that its democracy has always been flawed, just now exposed.

On December 9-10, 2021, US President Joseph Biden hosted a Summit for Democracy to which countries in Latin America and the Caribbean were invited. In fact, of the 32 CELAC member states, 24 were invited, and eight omitted, including Cuba, Guatemala, Honduras, Nicaragua and Venezuela. 13 CARICOM members were invitees.

In reality, in terms of strict respect for democracy, how many countries are actually now eligible to receive an invitation to a Summit of the Americas?

Also, from the suspension of the FTAA, promoting intra-hemisphere free trade has not been on the summit agenda. NAFTA revised barely survived the Republican Trump administration. The Biden trade policy is seemingly similar to President Trump’s and his policy positions on Latin America and the Caribbean seem to be following the customary trends, even with COVID, which has severely affected the region.

A State Department notice in the Federal Register dated August 20, 2021 proposed that the Summit of the Americas be held this summer and sought proposals for hosting from US cities by September 3, 2021. From OAS documents, the US proposed theme is ‘Building a Sustainable, Resilient, and Equitable Future’ focusing on health, a green future, equitable growth/prosperity, and strong and inclusive democracies.

There is still no date and venue given on the White House and State Department websites and no logo. Considering that important midterm federal and state elections are due in the USA in November, this summit would have to be held by early summer.

I do wonder whether this is a good time for a Summit of the Americas hosted by the USA.