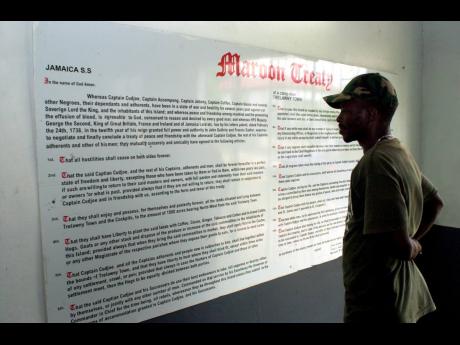 Article 9 of the Maroon peace treaty with the British which was being celebrated last week says “…if any negroes shall hereafter run away from their masters or owners, and shall fall into Captain Cudjoe’s hands, they shall immediately be sent back to the Chief Magistrate of the next parish where they are taken…”

One week ago, the Accompong Maroons held an annual celebration in commemoration of their ancestors’ signing of their peace treaty with the British. They see it as their ‘duty’ to honour their ancestors and to celebrate the distinguished and esteemed occasion of Captain Cudjoe’s betrayal of the enslaved. And in fact, they fulfil this ‘duty’ every year.

For those who still think the allegation of betrayal is whitewashed or colonial propaganda, Article 9 of the treaty which was being celebrated last week says “…if any negroes shall hereafter run away from their masters or owners, and shall fall into Captain Cudjoe’s hands, they shall immediately be sent back to the Chief Magistrate of the next parish where they are taken…”.

Well, we are no longer enslaved. We are now free and independent – despite the joint efforts of the enslavers and, eventually, the Maroons. With that said, the Maroons are here, in our midst. We will have to find a way to at least coexist, if not live amicably. The Government should allocate some time once and for all to thoroughly clarify the matter with the Maroons. Believe it or not, this recurring conversation won’t just die naturally.

The prime minister spoke clearly and unambiguously on Sunday. However, his comments will not bring closure to the matter. Clear parameters will need to be set, outlining how relations between the Jamaican Government and the Maroons will be facilitated moving forward. Based on the speed with which this matter seems to be escalating, this needs to be done as a matter of urgency.

As far as I am aware, Maroons leave their ‘territory’, trespassing on to Jamaican land for medical services, educational services and various conveniences, all the time. They do so without needing to show a valid passport or any form of identification and without being subjected to a search of any kind. They do so without any obligation to contribute to Jamaica’s collective pool of taxes (which pay for the services), besides the GCT they will naturally spend, usually while on Jamaican land.

If the Government needs help in addressing this issue, they can consider a big wall of Trumpian proportions. They can work with whatever borders the Maroons have suggested. Just get that wall up. The Maroons are not likely to want that, though, because a parasitic relationship is more attractive.

CAN’T EAT YOUR CAKE AND HAVE IT

In life, if you eat your cake, you won’t also have it to sit and look at. I therefore can’t find fault with the Government’s withholding of funds from self-proclaimed sovereign groups.

The Maroons can’t have a ‘right’ to Jamaican resources if they are sovereign and separate.

Notwithstanding the Maroons milking Jamaica’s breasts, the chief had the audacity to insinuate that Jamaica is actually not sovereign, while apparently, the Maroons are.

Jamaicans who are beholden to their biases towards the Maroons by virtue of their skin colour need to put sentimentalism aside and use common sense. As the prime minister said, stop courting foolishness and problems. Amid discussions of the Maroons’ betrayal, these Jamaicans tell us that the Maroons were left without a choice but to do what was in the interest of their survival. Yet, the Maroons taunt us by saying Jamaica ‘begged’ for its independence whereas the Maroons waged war to maintain theirs.

The clown show must come to an end at some point.

I can’t fake any great sense of support for a people who proudly celebrate their betrayal of MY ancestors. I can’t. If the Maroons are proud enough to celebrate their signing of the peace treaty every year, they clearly don’t regret having signed it.

Furthermore, as a hard worker, I don’t want the money the Government takes from me to be used to fund another sovereign state while many Jamaicans languish in poverty. And if the Maroons need Jamaican education, medical care, internet, electricity and monetary support, they can by no means be autonomous or sovereign.

As a Jamaican citizen, I am asking the Jamaican Government to address this matter urgently. Clear parameters need to be established by yesterday. This is not a next-year issue or a five-years-from-now issue to be left for when the Maroons seek buy-in from unrelated countries or CNN coverage. Leaving the matter unaddressed will not make it go away.