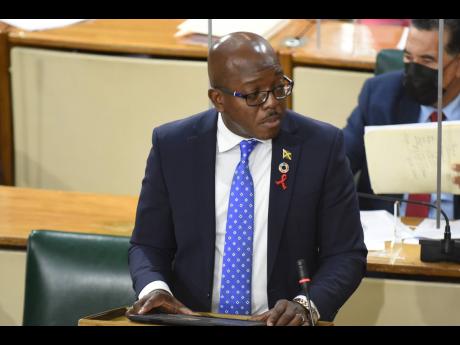 Mr Charles should insist that the bulk of the over J$4 billion the education ministry budgets annually for its school feeding programmes, be spent on Jamaican farm products. That would be good for the economy and the nation’s health.

In retrospect, Pearnel Charles Jr was destined to fail, or have very few accomplishments as the minister for housing, urban renewal, the environment and climate change. At that ministry, he largely presided over a facade. All the critical agencies, as well as the financial resources needed to get big or serious things done, resided with the Ministry of Economic Growth and Job Creation, of which Prime Minister Andrew Holness is the substantive minister.

Therefore, the abandonment of his old ministry and his assignment of the agriculture portfolio ought to be liberating for Mr Charles. It is now for him to embrace this freedom and articulate a clear vision for agriculture, taking into account the sector’s importance to the Jamaican economy and the context within which it now exists. In this regard, he has to consider how, for instance, to drive productivity, while minimising the sector’s contribution to global warming and climate change.

He also has to pursue effective ways to cauterise the losses farmers suffer each year at the hands of thieves. Put another way, a major part of Mr Charles’ job is to position agriculture as a modern and exciting cable of creating good jobs at decent wages, while being on the cutting edge of the fight against global warming. He has to make agriculture sexy.

Mr Charles has a good platform from which to generate this excitement – if he is invested and creative. In the past, discussion around modernising the sector has tended to focus primarily on the age of farmers (the majority are over 50), their relatively low education, and that they mostly employ old technologies that limit productivity.

While these are serious matters to be addressed, perhaps a more important starting point is to note that agriculture, including forestry and fishing, accounts for over eight-and-half per cent of Jamaica’s gross domestic product (GDP), with a current value price in 2020, according to the World Bank, of US$1.19 billion.

Further, various analyses underline a strong correlation between growth in the sector and growth in the wider economy. Which, of course, makes sense, given that, in 2020, the sector accounted for 192,000 workers, or 14 per cent of the labour force. That job number has in the past decade gone as high as 220,000.

So when Mr Charles sits at the table with other ministers, to the backdrop of the ongoing COVID-19 pandemic and its disorienting impact on economies, he is on good grounds to insist on agriculture’s equal treatment, and right to resources, as other sectors of the economy. He also has the argument of agriculture’s potential to be a substantial driver of growth and employment.

After a sharp decline in 2020, following the collapse of tourism, the island’s food imports – around a fifth of total imports – was projected to return to the US$1-billion mark in 2021. Agricultural experts have long argued that up to 25 per cent of this bill could be displaced with domestic production or substitutes. That hasn’t happened. But, were it to take place, a rough calculation is that upwards of US$200 million, over J$30 billion, could be available for investment and consumption of domestic products.

The upside would include improved food security, job creation and increased opportunity for backward-and-forward linkages in the economy.

Recent data isn’t available, but one study a dozen years ago suggested that only 39 per cent of Jamaica’s primary agricultural output (in value) was used as intermediary goods, or inputs in further production. The ratio for most other countries in the Americas was nearly twice Jamaica’s. This, it seems, provides more opportunities for the farming sector to drive production linkages.

Additionally, as the island’s schools begin to return to face-to-face classes as Jamaicans adjust to COVID-19, Mr Charles should insist that the bulk of the over J$4 billion the education ministry budgets annually for its school feeding programmes be spent on Jamaican farm products. That would be good for the economy and the nation’s health.

Importantly, too, as a small island state susceptible to the ravages of climate change and global warming, Jamaica has a stake in the global practice of sustainable agriculture. Global agriculture accounts for an estimated 15 per cent of the 59 billion tonnes of greenhouse gases man-made activities spew into the atmosphere.

The highest portion of agriculture’s emission is associated with livestock farming. However, the sector’s carbon footprint is lengthened by its inputs, including the technologies it employs in production, such as in the manufacture of the fertilizers that have helped to propel the productivity of modern farming.

The trick, in the new circumstances, is how to sustain, and even enhance, from output, while lessening the application of artificial inputs, as well as more sustainably using a resource like water, which, given more frequent and prolonged droughts associated with climate change, will become increasingly scarce.

These, however, are conditions that many Jamaican farmers, especially those in the so-called bread basket parish of St Elizabeth, have historically contended with, and for which they adopted appropriate technologies. Covering fields with grass, for example, to maintain moisture in the soil, used to be common in that region – as was limited ploughing of fields to keep soils rich in carbons.

The issue now is how these techniques, which are being given new relevance globally, might be upgraded and/or adapted to modern commercial agriculture, and whether Jamaica can have a place in the markets for organic and sustainably grown products.

In posing these and other questions, Mr Charles should, beyond his in-house technocrats, insist on answers from the island’s educational and research institutions, especially the College of Agriculture, Science and Education (CASE).

Their research, too, should also help to provide solutions to the problem of the theft of agricultural products. Farmers will hardly be able to remain profitable in business if 10 per cent or more of their output is lost to praedial larcenists.