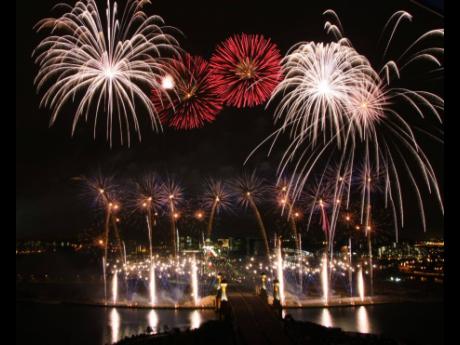 What bothers me and many other Caribbean people is that every major national event, especially Independence Day and New Year’s Eve, is a time to let off fireworks without any consideration for animals, including birds, our senior citizens (like me) and children (especially those who are autistic).

My wife Indranie is an animal magnet and claims this is why I was attracted to her. On the other hand, and given that we have been together for over 25 years, that clearly makes her an animal lover of the highest class and longest standing.

Wherever we have lived, she has fed the birds with seeds, bananas and bread, all except the tiny banana-quits which seem to have quit bananas for life, and the many beautiful and very demanding hummingbirds. They get a special and ongoing supply of a home-made sugary mix from Indranie.

When any of the feeders are empty, or the bread and seeds are not in the yard when they arrive, the birds either chirp angrily or look Indranie straight in the face and let her know in absolutely no uncertain terms their disappointment and, sometimes, their anger and disgust.

Right now, though, having moved from Barbados, Belize and Antigua, our personal stock is down to a Trini rabbit and two very little, furry dogs that came with Indranie from Antigua. In fact, she takes such good care of them and treats them so well that she is both a dogsbody and the dogs buddy.

Although I no longer need to walk long distances home in the dark, I still keep an athletic distance from dogs. The bigger the dogs, the greater my distance from them. More, because I am allergic to their fur and can’t play with them, I tend to let our sleeping dogs lie – not as much as our politicians perhaps, but enough to keep them in good health and strength.

However, because most Caribbean governments allow sleeping dogs and people to be terrified and terrorised by rockets, Roman candles, Catherine wheels, Chinese lanterns, mines, cakes, barrages and sparklers, I am now doggedly determined to join the battle against fireworks. Like the many people and organisations who have let slip the dogs of war against politicians, I have also put those who refuse to uphold our laws, especially animal and human rights, in the doghouse.

What bothers me and many other Caribbean people is that every major national event, especially Independence Day and New Year’s Eve, is a time to let off fireworks without any consideration for animals, including birds, our senior citizens (like me) and children (especially those who are autistic).

Perhaps because of how tough 2021 was, this New Year, 2022 was the noisiest I’ve ever experienced. Earlier in the evening, my family had a dog day afternoon but without Al Pacino. They were trying to make sure that the dogs were protected and had medication to help them sleep. However, at 2.00 a.m., having thought the fireworks were over, they put the dogs back in their accustomed space only to be awakened at 4:00 a.m. by one of our neighbours noisily bombarding our community with more fireworks.

I asked myself, “Al Pacino, where are you now when we need you most?”

A few hours later, I learnt that someone, somewhere in Trinidad was allowed to buy a ‘Chinese lantern’ without needing a licence to purchase or use it and, having let it loose into the night sky, made 25 people homeless.

Immediately, there was the member of parliament for the area claiming to be “upset and saddened” and how the incident highlighted “the irresponsible actions of a few”. I laughed because the few on the night of December 31, 2021 were we who were worried about the noise that the majority was making. What he and many others did not admit is that the different governments of Trinidad and Tobago since Independence Day 1962 are the ones ultimately responsible.

What is worse is that, over the almost 60 years of ‘freedom’ from the British, we have continued to suffer the slings and arrows of outrageous governments and beg alms within a sea of troubles. Regardless of all the political posturing and promises, to use a relevant Trini canine phrase, “We dogs dead”. This means that the situation is as hopeless as we are helpless.

What some people ask is why our prime minister, who is nicknamed ‘Rottweiler’ because he can be fierce when he is not pleased about something, is not creating fireworks of his own against the vendors, police and ministers responsible for making, upholding and breaking the laws of the country.

After all, when my son asked me “What’s got four legs and an arm?” and I told him I didn’t know, his answer was, “A happy Rottweiler”. Then, when he returned with “What do you get when you cross a bunny with a Rottweiler” and once more I was at a loss, he replied “Just the Rottweiler”.

THE JOKE’S ON YOU

I know that trying to make the government, especially its leader, come to heel or learn new tricks is very difficult for the paw fellows. I might be making much adog about nothing. However, when my son stopped asking me Rottweiler questions, I told him my favourite Rottweiler joke.

A quiet, little man walked into a bar with a Dachshund under his arm and was immediately made fun of by a burly giant with a Rottweiler. “What a stupid, ugly excuse for a dog,” the big bully guffawed. “Long nose, no legs. Ugliest dog I’ve ever seen.” The little man mumbled, “Yes, but he’s real mean.” The big man forced a bet on the meek little man. “Fifty dollars,” he boasted, “that my Rott can finish off your poor mutt in two minutes flat.” The two animals lined up nose-to-nose and the short, ugly one lunged forward and bit the Rottweiler in half. “What kind of a dog is that?” asked the amazed Rottweiler owner. “Well, before I cut off his tail,” the little man said, “he was an alligator.”

Actually, pretty soon the dogs might be able to speak for themselves. A recent study found that dogs know up to 215 words and phrases, including difficult ones like ‘vacuum’, ‘lake’ and ‘peanut butter’. Another study found that, in addition to ‘sit’, ‘stay’, ‘wait’, ‘yes’, ‘no’ and ‘leave it’, some of them also know ‘treat’, ‘breakfast’, ‘dinner’ and ‘ball’.

I am sure that our politicians are almost as good as the dogs but are more sophisticated. For example, when asked whether they will deal with the fireworks menace or help the suffering dogs, they not only understand your question but might quickly reply “yes”, even though they mean “no”.

When invited by a businessman to “come” and “stay”, my friends joke that politicians immediately expect a ‘treat’, ‘dinner’ or ‘breakfast’ and, when there is a cheque, they take a quick check to see if anybody is looking and, if not, they then quickly say “leave it” and have a ball after.

The only problem that dogs and humans have in common is the example of the Rottweiler. One comedian said that while horses neigh and camels grunt, the language capacity of the Rottweiler is so limited that all it can speak is “Rott”.

Tony Deyal was last seen saying that the only dog worse than a Rottweiler is the one you get when you mate a Bulldog with a Shi Tzu. Email feedback to columns@gleanerjm.com