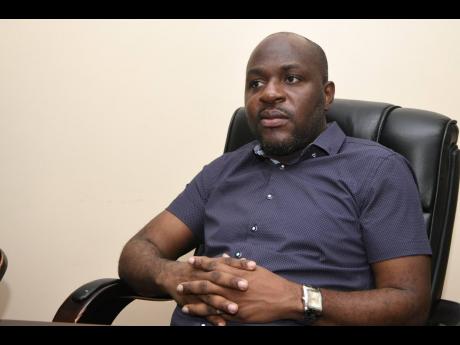 File
The matter of the contract of Shane Dalling, the one of the FLA, was raised by the Auditor General Pamela Monroe Ellis, in her review of government ministries and agencies for the 2020/21 financial year. That document was tabled in Parliament last week.

It is surprising that no one seemed to have waved a red flag when Shane Dalling’s new employment contract was agreed last April, and presumably signed off on by the board of the Firearm Licensing Authority (FLA) that included a retired high court judge.

It is also a shock that Dr Nigel Clarke, the minister of finance and the public service, didn’t cause the public sector to be scoured for contracts containing clauses similar to that enjoyed by Mr Dalling, given that several of the questions likely to be an issue, should the FLA CEO be terminated before the expiry of his contract, were at the centre of a 2019 case ruled on by Justice Calys Wiltshire, involving the Housing Agency of Jamaica’s (HAJ) successful bid to overturn a ruling against it by the Industrial Disputes Tribunal (IDT).

The tribunal awarded a former HAJ employee, Leslie Daley, J$8.7 million in compensation for what it held was unfair and unjustified dismissal, although Mr Daley initially appeared to accept the fact and terms of his firing. Ironically, someone named Mr Shane Dalling, instructed by the firm Dunn Cox, is named in Justice Wiltshire’s judgment as having appeared for the HAJ in the matter.

The matter of the contract of Shane Dalling, the one of the FLA, was raised by Auditor General Pamela Monroe Ellis, in her review of government ministries and agencies for the 2020/21 financial year. That document was tabled in Parliament last week.

According to the auditor general, Mr Dalling’s contract states that “either party may terminate this agreement by giving to the other two months’ notice in writing. Termination by the Firearm Licensing Authority before the completion of the contract period shall be accompanied by the payment of gross salary for the remaining period of the contract but not exceeding two and a half years’ gross salary, plus prorated gratuity.”

OUTFOXED AT THE CONTRACT TALKS

On the face of it, should Mr Dalling, at this point in his employment, engage in some egregious act or behaviour that convinces the board of the FLA, including its chairman, Col Audley Carter, that his dismissal is warranted, Mr Dalling is assured of at least two and a half years’ gross salary, except for any taxes that would be withdrawn from it. It wouldn’t matter that the FLA had cause to fire him. Taxpayers, who would pay the bill, were, it would seem, thoroughly outfoxed at the contract talks. Or their negotiators were wantonly acquiescent.

That begs the question of why it happened. For, as Ms Monroe Ellis pointed out in her report, the terms of Mr Dalling’s contract deviate from Section 8 (i) of the Government’s Fixed Term Contract Officers Policy Guidelines. Derogation from its terms requires approval from the finance ministry.

The policy defines a contract officer as someone employed in a ministry, department, agency or public body on a contract for a fixed term. That, on the prima facie evidence, encompasses Mr Shane Dalling.

The policy document adds: “A contract may be terminated prior to the agreed expiration date by either party giving notice, or by the Employer paying the Contract Officer salary in lieu of notice. Notice period should be in accordance with the following rules: Contracts for three (3) or more years – three (3) months’ notice.”

In the Daley case, he was summarily fired without cause and paid in accordance with the terms of his contract, which was in line with the policy directive. He appeared to accept the termination, but later raised questions about the fairness of his dismissal, whether HAJ followed due process and whether he was allowed a fair hearing, including his right to contest his termination. The IDT agreed with Daley.

However, Justice Wiltshire overturned the tribunal’s finding, primarily on the grounds that the IDT “erred in law when they failed to apply the legal principle of estoppel by conduct despite the evidence of a waiver by the 2nd Respondent (Mr Daley) of his rights to pursue legal redress against the applicant (HAJ)”.

The principle relating to agencies adhering to public policy, though, was substantially discussed in the case. This would have been expected to have been brought to the attention of policymakers and officials in the areas of government that deal with these matters.

Indeed, they might have asked Susan Reid-Jones, from the office of State Proceedings in the Solicitor General’s Office, which represented the IDT, for a brief on the matter. It still isn’t too late to do that.

Darlene Morrison, the financial secretary, told Parliament’s Public Accounts Committee (PAC) last week that the finance ministry has recently been issuing directives to agencies to comply with the ministry’s guidance on contracts, to avoid issues such as have arisen in Shane Dalling’s agreement. It needs to do more.

Dr Clarke, the minister, should insist on an audit of all public-sector contracts to ensure that they all fall within the guidelines – or be renegotiated if necessary. Inconsistencies of these kinds undermine trust in government. They create the presumption that some people are more equal than others.

It was to remove such anomalies, as we understand, that, in part, led Minister Clarke’s review of public salaries and job description. The question is whether he stands by that policy.