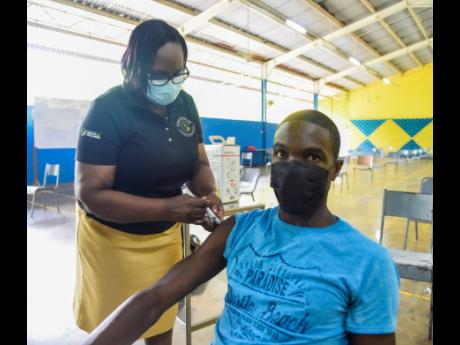 AS JAMAICA rides its fourth COVID-19 wave, driven by the very transmissible Omicron variant, we continue to have one of the lowest vaccination rates in the region. COVID-19 vaccines reduce the risk of severe illness, hospitalisation and death from...

AS JAMAICA rides its fourth COVID-19 wave, driven by the very transmissible Omicron variant, we continue to have one of the lowest vaccination rates in the region. COVID-19 vaccines reduce the risk of severe illness, hospitalisation and death from the disease. The data is there for all to see.

So, if the vaccines do make a difference, why is our rate so low? Authorities often blame it on vaccine hesitancy, but we need to ask ourselves two important questions. First, is hesitancy the only reason for our abysmally low rate? Second, what influences people to decline vaccination?

Our Government has to be honest enough to admit that they are at least partially responsible for our low rate. For most of the time that the vaccines have been available in Jamaica, they have been in total control of the process and have held on to it with an iron fist. People have been begging for their private doctors and health centres to get access to the vaccines, but their pleas fell on deaf ears. To allow this should have been a no-brainer. There are many people who became frustrated trying to get vaccinated and not getting through because of long lines and crowds at the few designated vaccination sites. These crowds not only made vaccination inconvenient, but also increased the risk of spreading the very organism that the vaccine is supposed to fight.

Not only that, people would have had more privacy had they been allowed to be vaccinated elsewhere, especially by their physicians. Not everyone is comfortable with others knowing they are being vaccinated. Some live in homes where other family members oppose vaccination and forbid them from taking the jab. Some are intimidated by fellow church members, co-workers, or people in the community. So, the thought of turning up at a public vaccination site, where they may be seen, creates discomfort and is a potential barrier. Probably even more importantly, people are more likely to trust their personal physicians and would be more comfortable receiving the jabs from them.

Regarding the people who are hesitant, or flatly refuse to be vaccinated, there are multiple reasons. Some are true anti-vaxxers and are against vaccination of any kind, but these are in the minority. Most of those who have declined vaccination against COVID-19 have no issues with other vaccines and the principle of vaccination, but are wary of these newer vaccines. Ignorance plays a major role. There are many who refuse the vaccines, but if you ask them how vaccines work, they have no clue. There are also many who fail to understand the concept of risk reduction. Too many times I have heard people ask why they should get vaccinated if they can get COVID-19 anyway, failing to understand that the main benefit of these vaccines is lowering the risk of poor outcomes, not necessarily preventing being infected by the virus.

Then there are persons of faith whose religious leaders and fellow congregants have convinced them that being vaccinated would displease God. A significant amount of people have also been influenced by disinformation and misinformation being disseminated by persons who are against the vaccines for various reasons. Some of the purveyors of this information are convincing in their delivery and have succeeded in scaring people away from vaccination.

In contrast, there are people who decline vaccination because they have examined accurate and factual information and made the decision that the potential benefits may not outweigh the risks for them. On one hand, billions of doses of the vaccines have been dispensed, and it would be unrealistic to expect no adverse effects. So, adverse effects have been reported, although the incidents of these events is low. On the other hand, some of these complications are severe, even fatal, and reading about them, or knowing someone who has experienced them, can be a turn off. There are also people who are unvaccinated because they have been previously infected and know that their natural immunity does have some value, especially if the infection was recent.

The widespread censorship also creates mistrust. Science has always been a field in which public discussion and vigorous debate have been encouraged…until now. Not only laypeople, but even physicians and scientists whose views do not align with major international health organisations are being censored and silenced, and this arouses suspicion.

Ironically, some of the very people who are trying to convince us to all get vaccinated are contributors to hesitancy, and we see an excellent example of this in our own country. Much of the messaging regarding vaccination has been generated by political leaders and government agencies. The problem is that people generally do not trust politicians and governments, and ours have done little to change that. For example, there is a video in which our minister of health and wellness, Dr Christopher Tufton, is seen trying to convince a woman in St James to get vaccinated. During the conversation, he tells her that four billion people have taken the AstraZeneca vaccine and “nobody nuh die,” and that the only people dying and going to hospital are the ones who did not take it. Those statements are not true, and can be easily fact-checked. When people see this, some will not believe anything else he has to say on the topic, because they are convinced that he is trying to deceive them.

Tufton’s recent statement that “the time has come for us to frown on the unvaccinated” is an unfortunate one. Not only is it divisive, but it is also unfair. The unvaccinated are not a monolithic group. There are multiple reasons why people are unvaccinated, and these must be investigated and addressed. Ease of access and honest messaging during the course of public education are vital. But coercion and intimidation are unlikely to produce the desired effect of a significantly increased vaccination rate.

Michael Abrahams is a gynaecologist and obstetrician, comedian and poet. Email feedback to columns@gleanerjm.com and michabe_1999@hotmail.com , or tweet @mikeyabrahams.