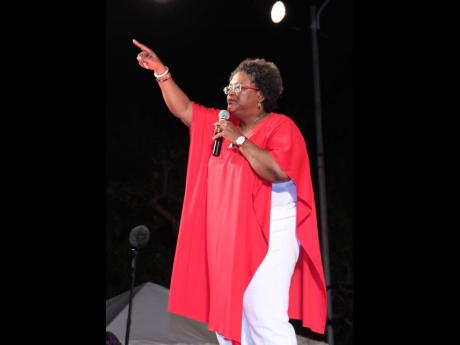 Rejecting the accusations of bullying and despotism that were levelled at Mia Mottley, the overwhelming majority of the electorate of Barbados returned her and her Barbados Labour Party (BLP) to government for a second consecutive term at a general election held on January 19.

Not only did the majority demonstrate their confidence in her, they returned her to office unanimously. As occurred in the general election of 2018, they gave her and the BLP every seat in the 30-member House of Representatives.

This result also put to rest any allegations that the majority of the people of Barbados are unhappy about their country becoming a republic. If this unhappiness existed, the general election was the time to demonstrate it by voting against Mottley – that did not happen. While the Constitution of Barbados does not require a referendum, it may be that many persons might have been unhappy that one was not held to allow them to vote on the matter, but any discontent was clearly not profound enough to cause the majority not to support her. And, make no mistake about it, the January 19 general election was most definitely about Mia Mottley’s leadership. The BLP campaign placed her front and centre of the election contest, declaring ‘Safer with Mia’ as its principal slogan. The main opposition Democratic Labour Party (DLP) also made her leadership style the target of their crusade.

Satisfied with her performance

So, if the election was a judgement by the people of Barbados on Mottley’s stewardship of the country’s affairs, it should now be obvious to all, except the disgruntled leadership of opposition parties, that the majority of the electorate are satisfied with her performance.

On the issues that mattered to the Barbadian people when Mottley was elected in 2018, she and her government tackled them successfully in the three years and eight months they held office. These included: overflowing sewage on the south coast of the island; poor commuter service because of insufficient buses; inadequate garbage collection resulting from an inadequacy of collection trucks; poor and deteriorating water supply; disrepair of roads; and decline in foreign reserves necessary to cover imports of goods, including food. She inherited these issues from the government of her predecessor, Freundel Stuart. He undermined the chances of his DLP in the January 19 general election by declaring its 10-year period in office, between 2008 and 2018, mostly under his leadership, as “glorious”. The electorate manifestly did not agree with him in 2018, nor in 2022.

As for restoring respect for the country in the international community, very few would dispute that Mottley quickly established high regard for Barbados that redounded to the benefit of the country’s image. She has been fearless in her representation of the rights of small states and her advocacy for attention to their interests.

While at the time of writing the official figures are not available, it seems that the turnout at the poll for the January 19 election was low – possibly around 45 per cent. At the 2018 election, the voter turnout was 60 per cent, and the average between 2003 and 2018 was 63.9 per cent. Three things could have accounted for the smallness of the poll, among them fear by older citizens of contracting the COVID-19 virus; conviction by traditional DLP supporters that their hastily assembled team, including those who were rejected in 2018, was not electable; and some disaffection by BLP supporters.

Whatever the reason for the low poll, Mottley and the BLP won all 30 seats in the House of Representatives for a second time, and they did so democratically in a transparent process. The prime minister and her government now have a mandate to implement the programmes and policies detailed in the manifesto they presented to the Barbados people.

One of the accepted principles of democracy is “a belief in shared power: based on a suspicion of concentrated power (whether by individuals, groups or governments)”. In the absence of an official opposition in the parliament of Barbados, power of government has been concentrated in Prime Minister Mottley and the BLP.

The prime minister and her government have to be acutely aware that the majority of the electorate of Barbados have trusted them with the proper stewardship of the nation’s affairs. Given this great trust that has been placed in them, they now have an obligation to consult widely and deeply with representative bodies, including the private sector, trade unions and specialist non-governmental organisations, in their administration of the affairs of the Barbadian people.

Such proper stewardship requires the inclusion of all in the society to equal opportunity; openness in listening to the views of groups and taking account of their positions; and structured machinery for frank discourse.

The prime minister and her government have a great chance to demonstrate to the people of Barbados – and the world – that democracy and democratic principles can be deliberately and thoughtfully upheld and strengthened, particularly when the electorate has entrusted them so fulsomely with the power of government.

In accomplishing this, Mottley can win another ‘first’ among all the other firsts that she has already attained as a warrior for people’s rights and a champion of democracy.

Sir Ronald Sanders is Antigua and Barbuda’s ambassador to the United States and the Organization of American States. He is a senior fellow at the Institute of Commonwealth Studies, University of London and Massey College in the University of Toronto. The views expressed are his own. Send feedback to columns@gleanerjm.com. Responses and previous commentaries: www.sirronaldsanders.com