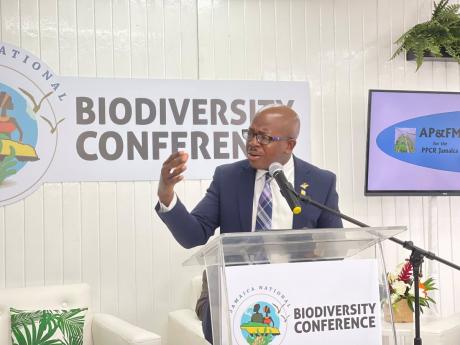 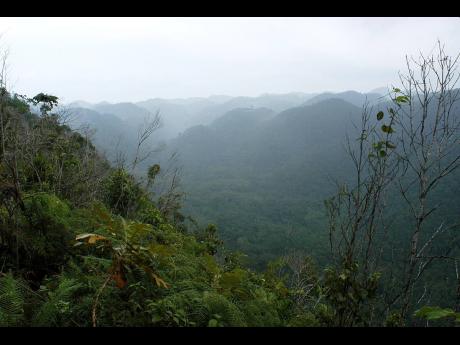 File
The forests of the Cockpit Country in Jamaica’s interior are a world-famous karst (limestone) habitat, home to many plants and animals found nowhere else in the world as shown in this October 11, 2003 file photo.
1
2

The Forestry Department has designated the Cockpit Country as falling within five parishes: St James, St Elizabeth, Trelawny, Manchester and St Ann, while also bordering on the cusp of Hanover, Westmoreland and Clarendon.

The Cockpit spans five watersheds, it is the source of six major rivers and is a critical water resource for 25 per cent of Jamaica’s surface water run-off. The Cockpit is the site of premier Karst Geomorphology, Maroon wars, and most significantly, it is a sanctuary to endemic and endangered species such as plants and animals.

The Amazon Rainforest produces 20 per cent of the world’s oxygen, and in comparison, the Cockpit Country aquifers contain 40 per cent of Jamaica’s exploitable groundwater resources.

Jamaicans are presently contending with a recent approval of a Special Mining Lease (SML) 173 by the Natural Resources Conservation Authority (NRCA) for bauxite mining in the Cockpit Country. What are the implications of this? Massive health hazards, respiratory diseases, noise pollution, air pollution, contamination of drinking water, extraction of valuable minerals, infringements on livelihoods – where communities may experience radical shifts in their socio-economic conditions, etc. Psychological, emotional and financial impacts on these community members may oftentimes precipitate displacements of those members and, by extension, leaving communities that much more impoverished.

The Government, meanwhile, is seeking financial reprieve from other countries in the Global North to help mitigate impacts of climate change, while in the same breath, aiding the destruction of its own island’s hills and valleys that buffer and protect Jamaicans from the natural progression of storms and hurricanes.

This approval should not be considered in the slightest as “progress”. The entire notion of mining ought to be admonished 100 per cent. Mining has devastating catastrophic impacts and will inhibit people’s health and livelihoods. What difference does it make if mining takes place at 8,335 hectares versus 1,324 hectares; when in fact either way results in health hazards, displacements and disruption to our ecosystem?

NOT BENEFITING FOR BAUXITE

Lauren Creary, programme director of the Jamaica Environment Trust (JET), said recently on the podcast IMPACT 360°, “It’s interesting to note that St Ann with a history of bauxite, the areas are not benefiting from mining and is one of the poorest communities.”

UN’s COP26 November 2021, The United Nations Climate Change Conference (COP26), had the presence of Prime Minister Andrew Holness and then minister of housing, urban renewal, environment and climate change, Pearnel Charles, Jr, whose mission it was to annihilate concepts of ‘unsustainable actions’ not supporting climate change and the environment. Both representatives presented themselves as proponents of protecting Jamaica’s endemic and endangered species, and encouraged sustainable environmental practices.

Minister Charles, in his recent speech at the second National Biodiversity Conference, said, “We have a tendency to care more about our cars and clothes more than the living things around us.” I suppose Jamaicans can now ‘safely’ say that the minister is reiterating the GOJ’s priority to receive economic benefits rather than to sustainably safeguard its ecosystem and the citizens’ health and livelihoods.

Mr Charles went on to add: “It is important for us to understand the connection between protecting the plants and animals that are in Jamaica and nowhere else, because everything on this Earth has a specific responsibility and a role. We appreciate the diversity of the plants and animals, especially in Jamaica. Unfortunately, it is we who have caused those same living organisms that we depend on to suffer, at our hands. That is why so many species have been completely wiped out, extinct. Flora, fauna are now put at serious risk.” He also included: “Biodiversity are the pillars upon which we build civilisations.”

How then is the minister contemplating the impacts of mining on the residents of the Cockpit Country and, by extension, the people of Jamaica, with its degradation of our ecosystem and the extraction of our valuable minerals and other geological materials?

Minister Charles, how does the devastation of mining interconnect with the people of Jamaica, and specifically the people of St Ann?

The prime minister tweeted on February 18, 2021: “Jamaica will pilot an investment prioritization tool that will integrate Climate Change in infrastructure development.”

QUESTIONS TO THE PM

Mr Prime Minister, what has been the legacy of mining in our island of Jamaica for the last 70 years? Is mining in the Cockpit a mechanism to facilitate climate change adaptation? Is mining Jamaica’s readiness for the unpredictable impacts of climate change? Mr Holness, how is Jamaica really to be DEVELOPED from mining?

– Take urgent action to combat Climate Change and its impacts

– Conserve and sustainably use the oceans, seas and marine resources for sustainable development

– Protect, restore and promote sustainable use of terrestrial ecosystems, sustainably manage forests, combat desertification, and halt and reverse land degradation and halt biodiversity loss – inter alia, tackling the effects of climate change, stemming the proliferation of IAS, protecting endangered and endemic species and encouraging sustainable use of resources. Implementing the relevant policies and plans as well as enforcing legislation will help to build the resilience of these ecosystems to all forms of threats.

My people of Jamaica, will mining lead to “Prosperity for All’’, in accordance with Prime Minister Holness’ 2017 speech at the PIOJ’s Education Launch?

Minister Charles reiterates that the Government is attempting to “Protect coral reefs and mangroves”. What transformative actions are being undertaken to protect and preserve the terrestrial ecosystem of the Cockpit Country?

Mr Prime Minister, how is mining in the Cockpit Country strengthening Jamaica’s efforts to build climate resilience and encouraging the increase of biodiversity within its forests and the wider environment?

We should remind ourselves that we can only thrive in an ECO-system and not an EGO-system.

- Klandine Thomas is the host and producer of IMPACT 360 ° with Klandine. Email feedback to columns@gleanerjm.com and impact360ja@outlook.com