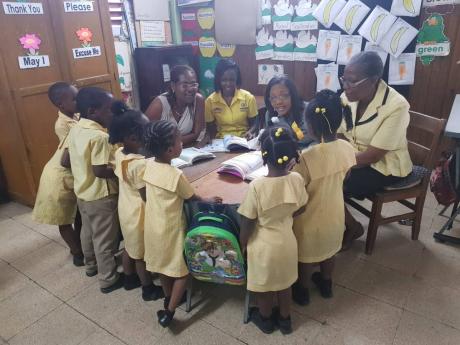 During the current fiscal year, the Government will spend J$7.1 billion on its school feeding programme, providing breakfasts and lunches to 130,000 students. We wish more children could be accommodated in the programme. For as the education minister, Fayval Williams, observed during her recent report to Parliament on her portfolio, “nutritional status impacts access to learning, readiness for learning, and success at learning”.

The educational import of the project, as identified by the minister, apart, there are two other areas, relating to health and the national economy, where an appropriately structured and integrated school feeding programme can have significant value to Jamaica. Neither idea, as Minister Williams’ remarks indicated, is novel. But both have been talked about for a long time. Little headway, however, has been made on either.

According to Mrs Williams, an associated component of the school feeding programme will be the promotion – through physical activity and the formal curriculum – of healthy lifestyle choices. The health and education ministries are partnering on this.

Said the minister: “... We will make efforts to get the National School Nutrition Policy approved and implemented, to train our cooks in the preparation of more nutritious meals. We will provide menu-planning support and menu monitoring through the use of digital technology. We will increase the use of locally grown produce in our cooked meals, and we will increase support to schools for their school gardening projects, pulling on our parents and local community support.”

The logic of these proposals is unimpeachable. The data underline the urgency of their implementation. While the COVID-19 pandemic, understandably, has appropriated attention over the last two years, Jamaica also faces a crisis of non-communicable diseases, relating primarily to what and how we eat.

For instance, a health ministry report last year showed that 34 per cent of Jamaicans are hypertensive (high blood pressure), and more than one in 10 (12 per cent) of us suffer from diabetes. Fifteen per cent have chronic kidney problems. Of those of us who die each year, more than half (51 per cent) were diagnosed with high blood pressure, while nearly four in 10 of us (36 per cent) had diabetes. Ten per cent suffered.

These diseases may not be the specific causes of our deaths, but they often contribute to the cardiovascular conditions that kill seven in 10 of us.

This study showed, too, that the consumption of fruits and vegetables among children is low; that they do not consume enough water; and that they have too little physical exercise. Seventy per cent consume sugar-sweetened, carbonated drinks at least once a day.

This was part of the basis for Health Minister Christopher Tufton’s 2018 announcement of an initiative to regulate the kinds of foods served and sold in schools, including placing limits on the sugar content of the drinks offered at canteens and tuck shops.

One of the returns of this and similar projects was expected to be to cut the island’s incidence of non-communicable diseases (NCDs) by a quarter by 2025, thus reducing the hundreds of millions of dollars spent each year on treating these diseases. It would also help to mitigate the projected J$47 billion the economy was projected to forgo over a 15-year period, due to the deaths and productivity-related problems among people with NCDs.

Perhaps distracted by COVID-19, there has been no update on these policy initiatives by Dr Tufton or his technocrats. Indeed, Education Minister Williams suggested that a school nutrition policy is yet to be finalised. The recent full reopening of schools and the return to face-to-face classes make this an absolute priority.

The agriculture minister, Pearnel Charles Jr, must be pulled to the centre of the programme. Mrs Williams reported a planned increase in the use of locally grown foods in the cooked meals offered by schools. That should include any foods offered in these institutions – and in any government facility where food is served – as well as the snacks prepared by the government company, Nutrition Products Limited.

Indeed, as this newspaper has said many times before, it should be policy that meals served in schools are based solely on Jamaican-produced foods, in particular locally grown fruits, vegetables and meats. Any deviation from this standard should be on the basis that a Jamaican product or CARICOM substitute is impossible to find. Further, value-added criteria must be established – at a high bar – for the classification of domestic products.

Of the J$7.1 billion being spent on the school feeding programme, around 81 per cent will be primarily the cost of the raw foods that go into the breakfast and lunches. That would be a substantial boost to Jamaica’s agriculture if it were to be spent with farmers – helping to accelerate the lowering of Jamaica’s US$1-billion annual food import bill. The experts say that this bill can be slashed by up to a quarter by substituting some of the imports with Jamaican-grown products.

Jamaicans are wont to say that “every mickle mek a muckle”. Directing the spend for school meals to local farmers can help us make that muckle.