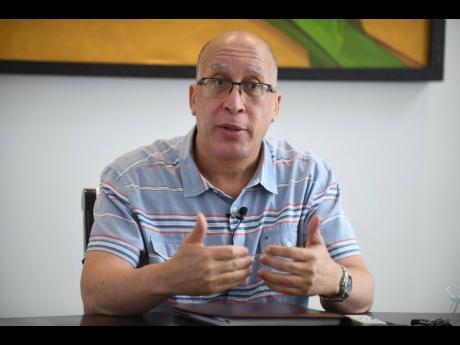 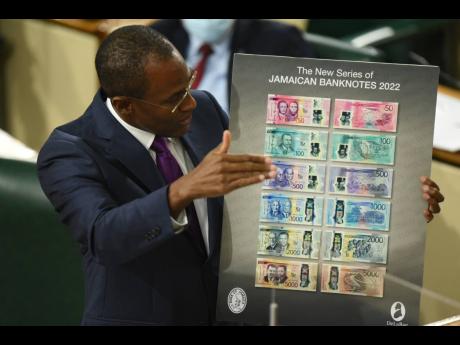 JIS
Finance Minister Dr Nigel Clarke displays in Parliament mock-ups of new notes to be put into circulation in the coming months.
1
2

The Government, led by Prime Minister Andrew Holness, recently took a deliberate political decision to print a $2,000 banknote bearing the images, side by side, of former prime ministers Michael Manley and Edward Seaga.

No matter how the Hon Nigel Clarke, the minister of finance and public services, who made the announcement in Parliament, tries to spin it, the primary objective of placing both images together is to continue the relentless campaign to try and make the unpopular popular. The campaign is geared specifically at capturing the imagination of the younger generation who may not be aware of the political activism of both men.

Michael Manley won national elections in 1972, 1976 and in 1989. He lost in 1980 to Mr Seaga. He did not contest the 1983 elections because the Jamaica Labour Party (JLP) failed to stick to an agreement that no elections would have been called before the voters’ list was properly upgraded to include new potential voters.

Mr Seaga’s victory in the 1980 elections had two primary features, which hitherto were foreign to Jamaica politics. First, it was, and to date, the most violent campaign and election the country has ever experienced. Of 800 persons killed that year, 600 were as a result of election-related violence. Second, the election campaign saw the involvement of international forces, specifically the Central Intelligence Agency (CIA), who were hell-bent on removing Manley from power.

Mr Seaga lost national elections in 1976, 1989, 1993, 1997 and 2002, much to the chagrin of the then young Turks in the JLP who, thereafter, campaigned heavily for him to resign as JLP leader, and for him to be replaced by former Prime Minister Bruce Golding.

Every poll conducted by respected pollsters, and especially the revered Carl Stone polls, have had Michael Manley ‘donkey lengths’ ahead of Mr Seaga as it relates to who the Jamaican people most loved and admired.

Michael Manley died on March 6, 1997, and in a Stone poll carried in The Gleaner of March 17, 1997, it showed that 67.9 per cent of the Jamaican people believed he should be made a national hero.

In the Stone Organisation poll of December 2000, when asked which prime minister had done the most to improve the lot of the people, 54 per cent said Manley.

The popularity of Michael Manley was further captured in a poll in The Gleaner of March 16, 2006, nine years after his death, which showed that 49 per cent of the people said that of the six prime ministers up to that time, he was the best. Michael Manley led his nearest rival by 34 per cent.

All these polls were done when Mr Seaga was still very active in national politics, as leader of the JLP and leader of the Opposition. While Mr Seaga was losing election after election, the people were still in deep admiration of Michael Manley.

After Mr Seaga’s retirement from active politics, he spent most of his years promoting the myth that Michael Manley wrecked Jamaica and that he, Seaga, was the country’s saviour in 1980, when he won the elections, and pulled the country from the path it had embarked on under Manley.

The planned printing of the $2,000 banknote with Manley and Seaga appearing side by side is a brazen attempt by the current administration, led by his mentee, our prime minister, to present both gentlemen as equals, when in the minds of the Jamaican people they are unequal.

The JLP, over the years, has tried to position Mr Seaga as the best economic manager the country has ever had. When examined, however, this argument falls flat.

Listen to Timothy Ashby, then director of the Office of Mexico and the Caribbean Basin from the US Department of Commerce, assessment of Mr Seaga after his electoral defeat in 1989. Ashby said, “Despite one billion (dollars) in United States development assistance and the close friendship of the (Ronald) Regan administration, Edward Seaga failed to transform Jamaica’s economy during more than eight years in office .... per capita GDP was unchanged from 1980 while foreign debt had more than doubled, leaving Jamaica one of the most indebted countries on a per capita basis. The Jamaican dollar had plummeted in value by 300 per cent against the US dollar ... Nearly a quarter of the Jamaican workforce remained unemployed.”

This assessment of Mr Seaga’s economic performance, during his stint as prime minister from 1980 to 1989, must be seen against the background of Mr Manley’s stint as prime minister from 1972 to 1980. During Manley’s time in office, he was constantly challenged by very hostile local and international forces who were opposed to him and his policies, plus, he also had to navigate the oil crisis in 1973, the global recession from 1973 to 1975, and the second oil crisis of 1979.

Michael Manley’s support, then and now, has come about because of his politics of humanity which led to the raising of the consciousness of people locally. This resulted in the introduction of a raft of programmes which improved the quality of life of our people, many of whom now occupy positions of prominence in Jamaica.

Like Mr Seaga, Manley was a nationalist, but he was also a regionalist, which Mr Seaga seems not to have been. Mr Manley, along with other political leaders such as Errol Barrow of Barbados, Forbes Burnham of Guyana, Vere Bird of Antigua and Barbuda and Eric Williams of Trinidad and Tobago, was a keen and active supporter of the regional national movement. Manley was also easily recognisable on the world scene as a spokesman for third-word issues.

Mr Manley’s huge support locally, regionally and internationally, compared to Mr Seaga’s low take-up in all three categories, has forced his ardent supporters in the Government to try and find ways and means to keep Mr Seaga at the centre of national attention. His appearance with Manley on the banknote is another such attempt.

Those who would wish to list what they consider to be all of Mr Seaga’s achievements are free to do so. Those who believe that he should be on a banknote are also free to do so. I would say to them, be free to place Mr Seaga on the $2,000 banknote, but please, leave Mr Manley on the $1,000 banknote. That’s where he has been for years.

The attempt to use the image of Manley, to try and promote that of another, in a situation where he and the other were poles apart, is not only a disservice and disrespect to both men, but is also a slap in the face of persons, here and abroad, who are not in support of this move by the Government.

- Delano Franklyn is an attorney-at-law and the former minister of state in the Ministry of Foreign Affairs and Foreign Trade. Send feedback to columns@gleanerjm.com