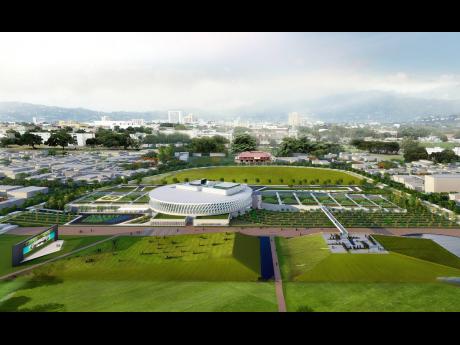 The hope that in the face of rational and logical argument the Government was persuaded of the error of its plan to build the national Parliament on the lands of National Heroes Park in Kingston seems to have been misplaced.

After a long period of quiet, the Urban Development Corporation (UDC), the agency that is in charge of the project, last month opened bidding for the construction of the complex, which is projected to cost US$50 million (J$7.8 billion). And a fortnight ago the UDC hosted a site inspection for prospective bidders, who have until June 28 to lodge their tenders.

Yet, it is still not too late for the Government to reconsider, which we urge Prime Minister Andrew Holness, the chief conceptualiser and advocate of the development, to do.

It is not that this newspaper, and others who disagree with locating the building at National Heroes Park, are opposed to the idea of constructing a new Parliament which, as Prime Minister Holness framed it, will appropriately reflect Jamaica’s democracy, independence and national aspirations. Indeed, Gordon House, currently the home of Parliament, is small and cramped and wholly inadequate for the needs of a modern legislature. The issue is that Heroes Park is the wrong place for it.

Prime Minister Holness and his administration hang their insistence on having the Parliament on Heroes Park, a 50-acre lot, on two pegs. The first is a clause in the George VI Memorial Park Act of 1956, which gave control of the park to the Kingston local government. It says that up to 11.4 acres of the park “may be used for the construction of Parliament buildings and such administrative and other buildings as the minister may consider necessary”.

Second, the prime minister wishes to redevelop the areas around the park into what he calls a “government campus’’, with the Parliament building as the focal point and ministries and agencies around it. The ministries of finance, education and a section of the Ministry and Labour and Social Security are already near the park. In other words, he would like to have a defined government district, similar to the Westminster/Whitehall area of London, or hints of Washington, DC.

But the first mentioned implied primary intended use of the park, as set out in the George VI Memorial Park Act, is worth noting. The local government, it says, “may develop and lay out all or any part of the park for use as a public garden, pleasure park and recreation area or for any of these purposes’’. It could also “apportion parts of the park for use for purposes of recreation, including athletics and other outdoor sports and games”. In this regard, the current use of 19.5 acres (39 per cent) of the land for monuments to, and the burial of, the island’s national heroes and other political and cultural icons is appropriate.

But there are other facts relevant to how it should be used. While – except for the sections with the shrines to the national heroes – the park is a largely unkempt dust bowl, it is perhaps the last remaining significant public ‘green’ space in the capital. It is surrounded by several blighted urban communities, such as Allman Town, Fletcher’s Land, Jones Town, Hannah Town, and the southern end of Cross Roads . More than 33,000 people live in these communities, nearly 60 per cent of whom are within one kilometre of the park.

Many of the people who live close to National Heroes Park use its open and accessible areas for recreation. They sit and commune on its perimeter benches and play football and cricket and other sports on its grassless, parched fields.

Much of this will be lost with the construction of the Parliament on the site, notwithstanding that the design provides for green and recreational areas in the area that will remain. It is very likely that security and related requirements will limit the public use of these areas and constrain the spontaneity that often characterises community play. And it is very unlikely this loss will be compensated for by the 23 ‘’non-contiguous acres’ of green space that is promised in the affected communities when they are redeveloped sometime in the future.

The sociological value of access, by communities and individuals, to green spaces, with the opportunity for outdoor play and recreation, is widely understood. Indeed, the use, in the two decades since its development, of Emancipation Park in New Kingston and of Harmony Park in Montego Bay in the year since it opened, makes the point. The social value of individuals and families, who live in gritty urban communities with no good public recreational facilities, being able to picnic and play in public parks ought not to be underestimated.

Indeed, the availability of Emancipation Park and Harmony Park, the grounds of Devon House, as limited as these are, and of Hope Gardens, help to foster wholesome social engagement and family life and should be counted as part of the Government’s crime-fighting strategy. The problem is that there are too few of them. That is why National Heroes Park should be developed along the lines of Emancipation Park and Harmony Park, unencumbered by a Parliament building – and strains and restrictions its presence would bring.

This doesn’t mean that Jamaicans don’t appreciate, and welcome, the majesty of Evan Williams and his Design Collaborative’s offering which won the design competition for the new Parliament. But that building, with what the competition’s judges described as its “exploration of precedent and metaphor, presenting a grand heroic gesture that resonates at the scale of the city”, would be as just a majestic interpretation of our democracy and aspirations elsewhere. Preferably on the vast acreages of King’s House, the home of the governor general and, soon, hopefully, the president.

A single campus of Parliament, the Office of the Prime Minister and the head of state would not only be functional, but make it easier to design the security arrangement for these critical parts of government without having to consider the daily trespass of the public pursuing recreation.