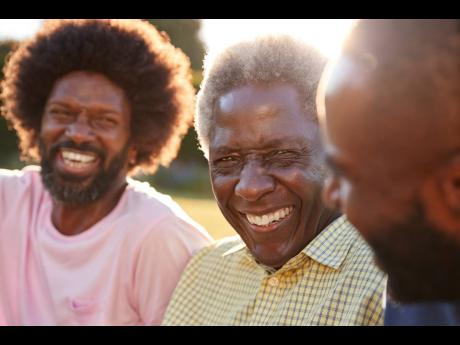 Why is it, that so many years after emancipation from physical slavery, so many of are still mentally enslaved, wearing the shackles used to enslave us on our brains like crowns?

The year was 1996. The regular host of the popular current affairs television programme, Tuesday Forum, was unavailable for the upcoming episode. The producers reached out to another popular Jamaican, Joan Andrea Hutchinson, to sit in for her and...

The year was 1996. The regular host of the popular current affairs television programme, Tuesday Forum, was unavailable for the upcoming episode. The producers reached out to another popular Jamaican, Joan Andrea Hutchinson, to sit in for her and she accepted the invitation.

But there was a problem. Ms Hutchinson had chosen to wear her hair in Nubian knots (‘Chiney bumps’) and some viewers were not having it. By the end of the programme, dozens of disgruntled people had called the television station to register their disapproval. Some of the comments were vitriolic, with Ms Hutchinson being ‘classed and styled’ and called many unsavoury names. The negative comments flowed freely, but the one that stood out the most for her was that she was a “dutty bumpy head gyal”.

But the torment did not stop there. The next day, while Ms Hutchinson was at her regular job at a radio station, a woman called to speak with her. The woman told her that she had enjoyed listening to her on the radio, but was appalled by her appearance on television the night before. She told her that she was a “disgrace to Jamaican women” and that if her maid had turned up for work looking like that she would have sent her home. She continued, “Don’t you ever come on my television looking like that again. You are like dirt.”

We are now in 2022, and last week a patient of mine, who works at a popular financial institution, informed me that the institution’s dress code forbids the wearing of Nubian knots to work. A nurse I know who works at a private hospital wears Nubian knots regularly, and is repeatedly summoned by the human resource department and told that her hairstyle is “inappropriate for the workplace”.

Why is it that, so many years after emancipation from physical slavery, so many of us are still mentally enslaved, wearing the shackles used to enslave us on our brains like crowns?

Why is it that in some quarters, if black females wear Nubian, or Bantu, knots, canerows/cornrows or locs they are frowned on, but if they process their hair or wear wigs or weaves resembling the hairstyles of Snow White, Sleeping Beauty or Cinderella they are accepted?

The discrimination is not confined to women and the workplace. At several schools, girls and boys are subjected to this bias. My daughter received her secondary education at a prominent girls’ high school and recalls an incident where the vice-principal accosted students wearing Nubian knots, dragged them aside, and pulled the knots out.

Our boys experience it, too. A female friend of mine related a story to me about her son, who attends a popular high school for boys. Her son, who is black, was told that his hair was too long and needed to be cut. My friend subsequently visited the school and saw boys of other ethnicities, such as Caucasian and Asian, and sons of prominent Jamaicans of Middle Eastern descent, wearing longer hair and freely moving about on the campus without harassment. The kicker for her, however, was an Indian boy with his hair so long he wore it in a ponytail. It was only after my friend took to social media and blasted the school and its administration that the principal relented and her son was left alone.

Many stories have been related to me of black students being denied school ID, yearbook photographs and graduation packages, and being barred from participating in school graduation ceremonies, sitting examinations, and even access to school compounds over the length or style of their hair, while more leniency was extended to their peers of other ethnicities.

On the other hand, a male friend of mine, of Indian descent, related his high-school trichological experience to me, recalling that he was able to pull his hair down to his chin and the school’s administration had no issue with it. However, black boys with Afros, whose hair grew beyond an inch ,were reprimanded and asked if “oonu a tun Rasta?”

As for the Rasta factor, some schools will allow boys to wear locs if they are Rastas and the locs are being worn because of their religious beliefs. But is there a rational reason why locs will be allowed only for religious reasons? What if a student wishes to wear locs because it aligns with his African identity, or simply because he likes it? Why should that be an issue?

Why the bias? Why the discrimination? Why are we seeing instances where rules are not being applied equally? What is wrong with natural black hairstyles?

It is clear that mental slavery still exists among us. During the enslavement of our African ancestors, their captors executed a multipronged strategy to dehumanise and subdue them. They rubbished their existing belief systems, destroyed their family structure, and rejected their appearance, resulting in many literally being uncomfortable in their skin, yearning for a lighter complexion and straighter hair.

It is time for us to wake up and reject this mindset. Those of us who are already awake need to raise our voices to high enough decibel levels to wake up those who are deep in their slumber.