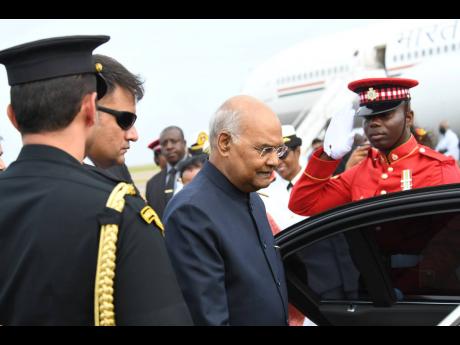 Rudolph Brown
President of India, HE the Hon Ram Nath Kovind, is visiting the CARICOM region from May 15-21.

The President of India, HE the Hon Ram Nath Kovind, is visiting the Caribbean Community (CARICOM) region from May 15-21. Specifically, he is on a state visit to Jamaica, May 15-18 and St Vincent and the Grenadines, May 18-21.

The cultural links between the Caribbean and India date back to the 19th century, in the post-Emancipation period, when to address the shortage of workers in the sugar industry, contracted indentured workers were brought from India between 1845 to the end of the indenture system in 1917. Over those 72 years, thousands of Indian workers were brought to mainly Guyana, Trinidad and Tobago, Jamaica, St Vincent and the Grenadines, Saint Lucia, Grenada, St Kitts/Nevis, and Belize. Indian indentured workers also went to the Dutch (including Suriname) and French territories.

Today, CARICOM countries have an estimated 1.3 million people of Indian descent. Indian arrival day is commemorated in CARICOM countries during May and June. Indian religious/cultural holidays are marked primarily in Guyana, Trinidad and Tobago and Suriname where people of Indian descent make up a large percentage of the population – in Guyana 44 per cent, Trinidad and Tobago 38 per cent, and Suriname 27.4 per cent. Only about 10 per cent of Jamaica’s population is of Indian descent, but the cultural influence is evident. Through British heritage, we also have the sport of cricket in common.

Since 2003, an India/CARICOM Joint Commission on Consultation, Cooperation and Coordination has existed. Foreign ministers of India and CARICOM have been meeting fairly often, usually on the margins of the UN General Assembly in New York. In 2019, the first India/CARICOM Summit was held when CARICOM Heads met with Prime Minister Narendra Modi in New York.

India is an important country with which to have political and economic engagement given its global influence being a member of the Group of 20 of the world’s major economies and the BRICS, the group promoting political and economic cooperation among Brazil, Russia, India and South Africa. CARICOM countries have opportunities to engage with India on a range of global issues not only in the UN system and the Commonwealth, but also at the World Trade Organization and other global economic fora.

CARICOM and India have technical and economic cooperation for development at both the national and regional levels which was seen during the COVID-19 pandemic.

In this period of pandemic and now with the global impact of the war in Ukraine, India is seen as having strong economic growth projections. We have to bear in mind that it has a market of 1.4 billion people.

CARICOM’s main exports to India continue to be natural resource based concentrated in the energy sector. Trinidad and Tobago has had a trade agreement with India since about 1997. India has interest in Guyana’s developing energy sector. Imports from India continue to be mainly in medicaments, steel, textile and clothing, and other manufactured goods. Services exports are hard to assess, but would most likely be in India’s favour.

Much work is still needed to further promote and diversify CARICOM’s trade in goods and services, and investments with India, especially in a country such as Jamaica. Of course, this requires the engagement of the private sectors of both CARICOM and India for this to be fruitful.