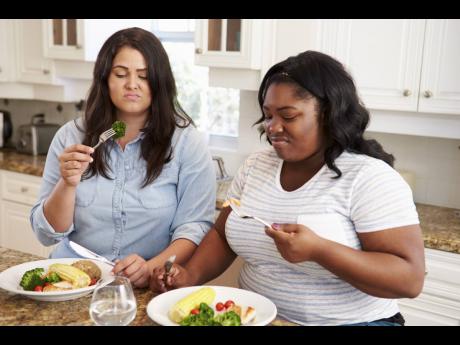 A significant part of what we are is what we eat. Competitive bodybuilders will tell you that they train very hard, but they diet even harder.

The Gleaner editorial, ‘Declare NCDs an emergency’, of Tuesday, May 10, quoted Minister of Health and Wellness Christopher Tufton as saying that “Jamaicans are digging their graves with their food”. Actually, the phrase is ‘… digging your grave with your teeth’, but otherwise, that declaration is true.

Chronic health problems, caused by non-communicable diseases (NCDs), like hypertension, diabetes and excessive weight, contribute to morbidity and premature mortality. Medicines for hypertension, and its complications, outnumber medications for any other disease. Diabetic treatments come in second place. Other NCDs, like asthma, various types of arthritis, psychiatric problems and many others, are not nearly as prevalent, as health-crippling, or as financially burdensome as hypertension and diabetes.

A major problem with NCDs is that the causes are multifactorial, and sometimes beyond the control of patients. To a lesser or greater degree, genetics play a role in some NCDs. For example, the contribution of genetics in how easily we gain weight and how difficult we find losing and/or keeping it off, was formerly underestimated. We cannot change or modify our genetics, but we can, to some extent, ameliorate the effects that genetics have on us.

We are living in a wider society that facilitates weight gain, hypertension and diabetes. We are required to commute more and more, and faster and faster. Bipedal mode of travel won’t cut it. Most people need to be transported one way or the other. That reduces or removes a huge part of the exercise that our bodies crave to function normally. Because of time constraints, eating has become something that we often do quickly and/or while on the (metaphoric) run. The food industry was quick to facilitate (oily and salty) ‘fast food’, which is usually tailored for ‘addiction’ to the taste, rather than for nutritional value.

WE ARE WHAT WE EAT

A significant part of what we are is what we eat. Competitive bodybuilders will tell you that they train very hard, but they diet even harder. There is no doubt that eating right is prohibitively expensive. Many years before people were taking notice, Roman Catholic priest Father Charles Dufour, now Archbishop Emeritus of Kingston, remarked to me that his underprivileged congregants could not afford to eat properly, so they were eating whatever they could buy and were becoming significantly overweight, hypertensive and diabetic.

It took many years for the medical community and governments to make serious efforts at adjusting the nutrition of entire nations, and not only of individuals seeking help from medical personnel like nutritionists and dieticians. Our own Ministry of Health and Wellness has taken great pains to put into policy some nutritional guidelines for everyone, but especially aimed at reducing the overweight problem among our youth, because they will carry that tendency into their adulthood.

Efforts include widespread public education and food/drink nutritional labelling. Although I (obviously) applaud the efforts being made by the Ministry of Health and Wellness, I also bemoan the glaring flaws in the master plan that doom it to failure. Getting adults and children to ‘comply’ (blindly obey) nutritionally will always be fraught with resistance, and failure. Getting adults and children to ‘adhere’ will reap success. However, herein lies the problem; adherence means ‘buying into’ something, participating through an understanding of the situation, and possessing a willingness and the ability to take charge of their own healthcare. Several things require more explanation/clarification, and our citizens are limited/handicapped by the state of our economy.

In October of 2018, the Minister of Health and Wellness lambasted Professor Errol Morrison, an eminent and brilliant scientist/physician. Prof Morrison sought clarity on the Government’s sugary drink message, because it is very important to keep in mind that the relationship between weight and diabetes can be complicated. Prof Morrison was providing food for thought (pardon the pun); after all, many Jamaican children literally grew up on sugary drinks of one type or the other; so why the high levels of diabetes now? For generations, high-energy drinks fuelled children’s very enthusiastic play, long walks home, and fed their brains with the only thing capable of powering them up… sugar (derived from whatever sources). What has changed is the necessary, heavy dependence on simple starches and sugars to survive, the reduced level of physical activity, lack of green spaces, and the ridiculous level of crime that forces children to stay indoors and play virtual games instead.

If we are going to significantly reduce our NCDs, we must address all the critical factors, like the spending power of our dollar; the need for inexpensive and available vegetables, fruits, complex carbohydrates, healthy protein; the need for many more green spaces; and security, so that we can exercise in them. The Ministry of Health and Wellness will never succeed alone – it needs to work in tandem with the Ministry of Agriculture and Fisheries, the Ministry of Finance and the Public Service, the Ministry of National Security, and the various municipal bodies.