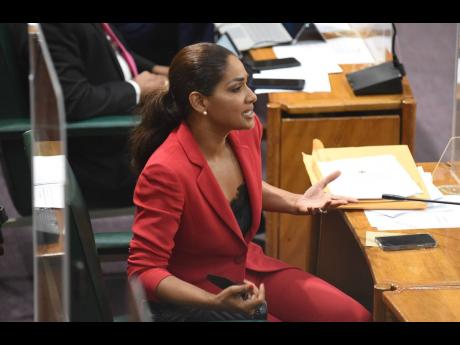 The least Prime Minister Andrew Holness can do is have Parliament, as Lisa Hanna has called for, debate the 2020 report by its human resource and social development committee (HRSDC) on abortion. Preferably, though, Mr Holness should immediately cause to be brought to Parliament a bill to repeal the notorious Sections 72 and 73 of the Offences Against the Person Act, which criminalise abortion, and have them replaced by a new law covering the termination of pregnancies. The pathway to abortions should be easier.

Indeed, as Ms Hanna, an opposition member of parliament (MP), pointed out in her private member’s motion tabled earlier this month, Jamaican administrations have procrastinated on this matter for nearly half a century in what, this newspaper can only conclude, have been flagrant acts of cowardice. The effect has been to diminish the agency of women, including their right of control of their bodies and of choice.

As we have several times lamented in these columns, but for a few circumstances, abortions are wholly illegal in Jamaica – and a serious crime. A woman who terminates her pregnancy can be sent to jail for life at hard labour. Anyone who helps her can be imprisoned for seven years.

Yet, it is estimated that there are upwards of 20,000 terminations in Jamaica each year, the bulk of them back-room operations, utilised by poor, often undereducated women. When these procedures go wrong, they generally end up in the public healthcare system. Well-to-do, middle-class women can usually find medical specialists to perform their abortions in safe circumstances.

So, like too many other things in Jamaica, access to this element of maternal healthcare – safe abortions – is delineated by class and wealth.

In 1975, two years after the US Supreme Court’s ruling in Roe v Wade, which broadly legalised abortion in America, Michael Manley’s administration in Jamaica took the first stab at a progressive approach to the matter. His health minister, Ken McNeill, attempted to have the law changed but ran into roadblocks. Generally, though, the administration turned a blind eye to abortions, even allowing at least one health clinic to unofficially provide the service.

Since then, across multiple administrations and health ministers, the issue has been revisited several times, including the establishment in the mid-2000s of a policy review group whose 2007 report proposed an approach to abortions that would have largely mirrored the standard laid out in Roe v Wade.

In the first trimester, when a foetus is not viable outside of the womb, terminations would be left to the sole discretion of a woman. Thereafter, up to five and a half months (22 weeks), abortions would have to be done in proper medical facilities, supervised by medical specialists. Beyond that, terminations would not be recommended, except to save the life of the mother and a few other extreme circumstances.

NOTHING CAME OF IT

That report was reviewed by a parliamentary committee in 2008. Nothing came of it, notwithstanding periodic calls over the years by various people, including Ms Hanna, for the matter to be dealt with. That is, until 2018, when on the basis of a private member’s motion by then government backbencher Juliet Cuthbert-Flynn, the issue was referred to the HRSDC. Mrs Cuthbert-Flynn is now the junior health minister, a bully pulpit that she can skilfully use to press the case.

Essentially, that committee, in a 2020 report, merely summarised previous documents and recommendations on the issue and suggested that the matter be subject to a conscience vote. It ought to have done more by making a specific recommendation for the passing of a Termination of Pregnancy Act in accordance with the proposals of the 2005 policy review committee. The Holness administration completes the job and fills that lacuna in the HRSDC’s report.

Prime Minister Holness should not feel constrained by the new right-wing majority of the US Supreme Court that based on a leaked draft ruling, seems intent on denuding, if not totally overturning, Roe v Wade or fear of a backlash at home. They are wrong, just as the anachronism represented by sections 72 and 73 of the Offences Against the Person Act is wrong. Which should be repealed and replaced by a civil law that affirms a woman’s agency and the right to her own body and to abort an unviable foetus. Mr Holness and his Government, on this issue, would stand on the right side of history. And for what is right.

On a net basis, neither Holness nor his party would lose votes over the stance.

Ms Hanna and Mrs Cuthbert-Flynn should aggressively lobby the Government and Parliament – particularly the legislature’s female members – to act with urgency.