Michael Abrahams | Abortion – Easy to criticise, but harder to empathise 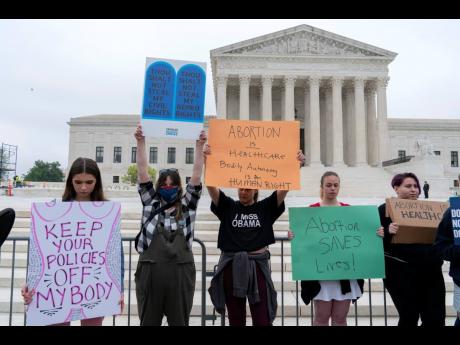 AP
Demonstrators protest outside of the US Supreme Court on May 3 in Washington. A draft opinion suggests the US Supreme Court could be poised to overturn the landmark 1973 Roe v Wade case that legalised abortion nationwide, according to a Politico report released on Monday. Whatever the outcome, the Politico report represents an extremely rare breach of the court’s secretive deliberation process, and on a case of surpassing importance.

It is so easy to judge women who have had abortions. It is easy to call them careless, irresponsible, cruel, wicked and sinful. You have a right to disapprove of abortion, and you have a right to express your disapproval. If you are one of those...

It is so easy to judge women who have had abortions. It is easy to call them careless, irresponsible, cruel, wicked and sinful. You have a right to disapprove of abortion, and you have a right to express your disapproval. If you are one of those who are critical of these women, however, there are a few thoughts I would like to share with you.

If you are a cis man, you do not have a uterus and will never know what is like to become pregnant and risk experiencing, along with the pregnancy and because of it, a host of physical and mental complications, or even death. If you are a cis woman, although you may have been born with a uterus, if you have never been pregnant, you do not know what women who have had abortions were faced with at the time they made their decisions. And if you have ever been in a situation where you were pregnant and did not want to be, but decided to keep the pregnancy, please understand that you still do not know what these other women were going through. Why? For the simple reason that you are not them.

Unless you are able to put their brains into your skulls and gain access to the inner workings of their minds, you will not know the physical, mental, emotional, social and financial situations they were experiencing when they were impregnated. You do not know the traumas they have experienced and the scars they bear. You do not know their levels of resilience and the support systems they did or did not have.

It is easy to criticise, but harder to empathise. However, if you are opposed to abortion, and wish to see less of it, empathy and compassion are what is needed. Denigrating these women and supporting punishment for them will not result in the desired effect of significantly reducing abortion rates. Research has shown this. However, by adopting an empathetic and compassionate mindset, we are able to understand the factors that lead to unwanted pregnancies, and in doing so, orchestrate interventions that would influence behaviour in a way that would decrease the likelihood of these pregnancies occurring in the first place.

Childhood trauma (especially sexual abuse), toxic and abusive relationships, ignorance about human sexuality and reproductive biology, poor access to contraceptives, and harsh religious judgement of ‘fornicators’ are some of the risk factors that may lead to abortions. So, if you are vociferously anti-abortion, it would make sense to redirect some of the energy used to criticise these women to actions that would help to lower the likelihood of them having them.

Encouraging and helping to make therapy available for survivors of childhood trauma is a great idea. Survivors of trauma, especially sexual abuse, are at an increased risk of early sexual activity, promiscuity, contracting sexually transmitted infections, teen pregnancy, and having abortions. Mentoring children and fostering them is another way to lower their risk of being in situations that could lead to unplanned and unwanted pregnancies.

Approaching schools and the Ministry of Education and Youth to provide age-appropriate, comprehensive sex education in our schools is another step. Research has shown that such programmes increase responsible sexual behaviour in students and decrease negative outcomes, including unplanned pregnancies and abortions. Ensuring that contraceptives, and information about their use, are available to our youth would also be of immense value. All too often, conversations about sex and contraception are withheld from teenagers – until a pregnancy occurs. Then, they are given the relevant information, and often chastised.

Shelters and other places of refuge for victims of intimate-partner violence are of immeasurable importance, but are woefully inadequate in Jamaica. Approaching our lawmakers and applying pressure for more of these venues to be built and made available would be wonderful. Indeed, women who are in abusive relationships are vulnerable and more likely to be impregnated against their will. Many have nowhere to go. Providing safe spaces for them would benefit them and their reproductive health.

Regarding religion, it can, in some instances, drive members of the flock to have abortions. The tendency of some churches to shame parishioners who have ‘fornicated’ has driven some women who conceive out of wedlock to opt to quietly terminate their pregnancies, rather than risk the humiliation of being disfellowshipped, ‘read out’ or ‘back-benched’. The irony is that some of the very clergy and parishioners who provide an environment that may influence some women to have abortions, are the same people who stridently condemn abortions, too.

What it comes down to, at the end of the day, is the policing of pelvises, especially those of women, as fornicating women are usually treated more harshly than men engaging in the same activity. Reaching out to ‘fire and brimstone’ clergy, especially if this is done by other, more empathetic, men and women of the cloth, may help to make a difference.

It is easy to criticise women who have had abortions, but harder to take steps to reduce the risk of women being placed in positions where they feel compelled to consider that option. But if we are serious about reducing the incidence of abortion, work has to be done, and it has to be a collective effort, devoid of stereotyping and judgement, and instead, guided by empathy and compassion, and a genuine desire to achieve the result of lower abortion rates.