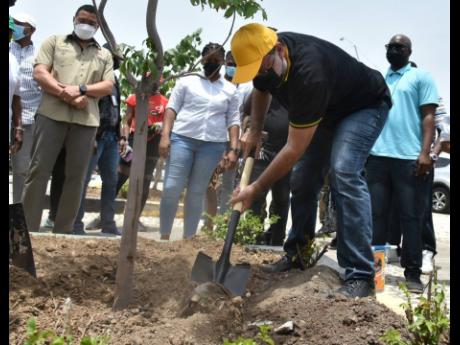 Kenyon Hemans
Prime Minister Andrew Holness (left) watches as Opposition Leader Mark Golding plants a tree at Nelson Mandela Park in Half-Way Tree, St Andrew. Mandela Park should be an oasis in the heart of a busy metropolis – a place where commuters should be able to pause and reflect. The area around the park and its immediate vicinity should be part of this embrace of the spirit of Nelson Mandela.

NELSON MANDELA would not give two hoots about the size of a park named in his honour, or if the space is really only “a little median” between two thoroughfares. What Mr Mandela would care about is that the park, any park, or similar public facility, wherever located, is accessible to the public, regardless of race, class or creed. And he would insist that the facility be well maintained and that its users be treated with decency and respect.

For that matter, it is what we would expect of anyone who thinks about these things and why, while welcoming Prime Minister Andrew Holness’ concern for the state of Mandela Park in Half-Way Tree, St Andrew, we believe his intention of finding a new, grander facility with which to honour Mr Mandela is misplaced.

Which is not to say the capital – indeed, Jamaica in general – is not in need of more parks and green spaces, they are. In fact, it is an opportunity to remind Mr Holness that it would be an error for the Government to go through with its plan to hive off a chunk of National Heroes Park in Kingston for a new parliament building, rather than redeveloping the entire area for play and recreation.

Nelson Mandela, even locked up for nearly three decades by his white jailers, was the enduring symbol of the fight against, and eventual defeat of, apartheid and white minority rule in South Africa. He emerged from prison to become the country’s first democratically elected president.

Mr Mandela was rare among leaders. He eschewed bitterness. In power, he displayed grace and humility, without compromising conviction. He did not forget those who supported black South Africans in their battle for freedom. Significantly, in 1991 Jamaica was among the first countries he visited after being released. Half-Way Tree Park was renamed in his honour.

The park is at the heart of one of the capital’s critical transportation hubs and commercial centres. Like the areas around it, where once-pristine kiosks have grown ramshackle. It is often enveloped in the rank scent of urine.

The Nelson Mandela Park, though, was this year’s National Labour Day project, the one where the prime minister and the Opposition leader joined others to give it a facelift.

Mr Holness, however, does not believe that was sufficient, or more significantly, that the park properly represents how Jamaica should honour Mr Mandela, who died in 2013. “It is not enough to just put whatever structure and say it is a park,” he said. “This wouldn’t qualify as a park. This is a little median, basically.”

Mr Holness’ sentiment is appreciated and his intention understood. But it is not necessary.

Mandela Park should be an oasis in the heart of a busy metropolis – a place where commuters should be able to pause and reflect. The area around the park and its immediate vicinity should be part of this embrace of the spirit of Nelson Mandela.

Removing Mr Mandela’s name from the park and searching for a new venue suggests surrender – surrender to ramshackle, indiscipline and nihilism. It implies a breaking of the spirit, which this newspaper doesn’t associate with Nelson Mandela, who Mr Holness claims as a personal hero.

With respect to Mr Holness’ wish to search for other spaces for parks, we agree with him. He doesn’t have to think hard or look far for the first of them. A chunk of the 52-acre National Heroes Park is already dedicated to shrines for the national heroes and respected cultural and political figures. The remainder of the park, now a dust bowl, should be developed as a recreational facility for the many thousands of people who live in its periphery and beyond. The national parliament can be built on the scores of empty acres available at King’s House, home of the governor general, thus creating a natural campus of the home and offices of the head of state, the existing Office of the Prime Minister and now the legislature. That’s a natural fit. It’s good for security.

Mr Holness should at the same intensify the search for other green spaces for the development of parks, smaller versions of Emancipation Park in Kingston and Harmony Park in Montego Bay. We have been told that parks are expensive to develop and maintain. The government should see it as investing not only in recreation, but in the recreation element – in the sense of making new and whole – of national security.

Green spaces provide people an opportunity for social expression that isn’t possible in their tight homes in gritty urban communities. For a living demonstration of this bit of sociology, the national security minister and the police chief should casually pass through these parks any evening, but especially on Sundays.