Peter Espeut | Patting themselves on the back 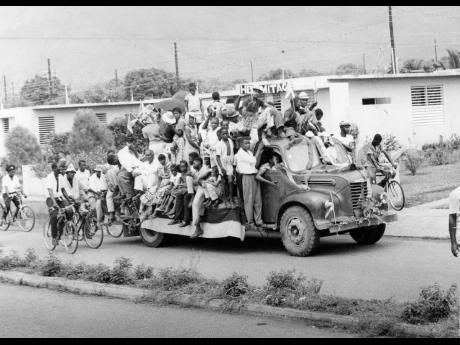 Gleaner Archives
If the track record of our politicians over the last 60 years shows nepotism and skulduggery, self-serving legislation, lack of transparency, questionable land deals, links to garrisons and gunmen, and subverting the country’s environmental laws, what do we have to celebrate on August 6, 2022?

In just over two months Jamaica will mark 60 years as a country independent of the shackles of a colonial master. Inevitably, we will look back and assess our progress – or lack thereof – at paddling our own canoe. Our two political tribes rarely...

In just over two months Jamaica will mark 60 years as a country independent of the shackles of a colonial master. Inevitably, we will look back and assess our progress – or lack thereof – at paddling our own canoe.

Our two political tribes rarely sing in perfect harmony, and age has conferred the wisdom that when they do, watch out! Flimflam alert!

Over the next two months, we are going to be treated to a public relations festival outlining the great progress we have made as a nation under the successive stewardship of the Jamaica Labour Party (JLP) and the People’s National Party (PNP)! They will pat themselves and each other on the back for the orderly way they have swapped state power between themselves, each taking their turn putting their snouts into the political trough. There will be little real analysis of the last 60 years amid the applause.

And after borrowing trillions of dollars over the last 60 years, what do we have to show for it in terms of our education and health infrastructure, our justice and security system, our housing stock, our food security, our natural environment such as our forests and coral reefs? Study after study shows that those administering the funds – whatever the colour of their shirts – have not obtained value for money.

There is enough applause to go around. Edward Seaga – the financial genius – increased our national debt by 500 per cent during his time! And we name highways and buildings after these people.

Over the last 60 years, politicians of both tribes have excelled at heaping accolades upon themselves, and scarce benefits and spoils upon their supporters. At Independence prime ministers were referred to as “The Honourable Prime Minister”; it was the anti-colonial P.J. Patterson who changed the law so that prime ministers are now referred to as “The Most Honourable Prime Minister”.

After 60 years, shouldn’t we have abandoned these British colonial customs? The Americans have! They don’t refer their president as “The Most Honourable Barack Obama”. Why should we? We have long abandoned the inconvenient and honourable British custom of resigning from public office in the face of public scandal. Why not complete the process and do away with the title “Honourable”? Why hang on to this misleading descriptor?

It was also P.J. Patterson that enacted a provision that the pensions of Most Honourable Prime Ministers automatically keep up with the times. I want the Jamaican public sector trades unions to take note of this! No other category of public servant has this benefit! In this case, “Parson christen ‘imself firs’!”

And we name highways after these people!

So far, our politicos have failed to pass laws that really bind them, and impose meaningful penalties on themselves. Laws that bind them carry little by way of penalties for breaches. For example, if a public holiday is declared illegally by the prime minister, there is no penalty. And if a politician fails to make his integrity declaration, there is no punishment. Nepotism is not a crime, and neither are breaches of procurement rules, which are no better than suggestions. Integrity declarations remain secret, as are the sources and size of political donations. This climate encourages influence-peddling, illicit enrichment, and political corruption.

Sixty years after the departure of our colonial masters there are still only a few really good high schools in Jamaica, (almost) all built before Independence by churches and trusts; never mind that Kingston Harbour is polluted and toxic and dead, that we have some of the most overfished waters in the world, and that relatively recently we had the highest rate of deforestation in the world.

If the track record of our politicians over the last 60 years shows nepotism and skulduggery, self-serving legislation, lack of transparency, questionable land deals, links to garrisons and gunmen, and subverting the country’s environmental laws, what do we have to celebrate on August 6, 2022?

Of course, we have the fastest men and women alive, a music and a lyrical culture that is world class, and cuisine second to none. These remarkable accomplishments are testimony to our quality and resilience as a people despite the political dead weights that misgovern us and devalue our human capital.

I have been writing a weekly column in this newspaper addressing these issues for half the time Jamaica has been an independent nation. As a trained observer of human behaviour, I am impressed with the growing political maturity of us Jamaicans as we turn 60. Political tribalism among the average Jamaican is at an all-time low (along with voter turnout). Only the deep tribalists (including some columnists and talk-show hosts) are still prepared to follow their leaders till they die, while the majority of us want performance. We see through the efforts of politicians to take credit for the phenomenal effort and self-discipline of our athletes, and the inevitable advance in technology globally.

I believe that we are near a point of inflexion in Jamaica’s development. Things can’t go on like this much longer. Now, that is a reason to celebrate!