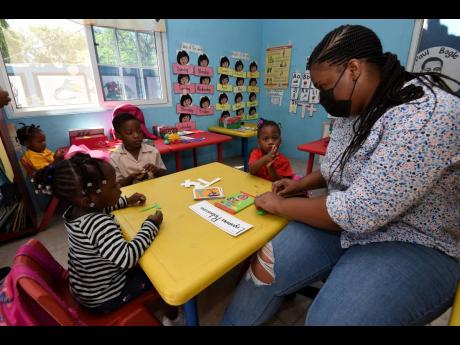 File
During the period from birth to six years old, the child’s brain grows at the greatest rate: the infant brain was designed to absorb everything in its environment.

At last, a strongly worded follow-up in The Sunday Gleaner by Gordon Robinson of Professor Orlando Patterson’s review of the failing state of the public education system.

This follows three Gleaner editorials on May 17, 18 and 22, which sought responses from the public and policymakers on its implementation. Commentary and agreement on the main issues have been forthcoming from experts, but a hesitation to commit by the Government of Jamaica and the Minister of Education may well be because there is a lack of certainty about the precise methods needed for successful implementation. And whether the funding required will be worth it, based on competing budget requirements.

Presently, there is not an insufficient budget for education. Our education budget per capita exceeds those of better-performing Caribbean nations, but has come up short, pointing to a misallocation of resources, and calling for a major overhaul. This latter point is reiterated by Mr Robinson quoting Professor Patterson.

The missing link that seems to be stymieing policymakers and stalling remedial action is the lack of agreement about when real education starts, and what immense significance it has for the further education and personal development of the individual, and, as a result, for the stability and prosperity of the nation.

The Jesuits, centuries ago, proclaimed: “Give me the child until he is six and I will show you the man.”

This is in full accord with science today, which has shown that during the period from birth to six years old, the child’s brain grows at the greatest rate: the infant brain was designed to absorb everything in its environment.

This is remarkably efficient as a method of education and socialisation, but the catch is that this environment can be nurturing or damaging.

If the child receives loving, attentive care from birth, he/she will be secure, happy, and ready to learn from all the stimuli presented.

If, on the other hand, the child is exposed to anger, abuse, or neglect, he/she will be suspicious, withdrawn or hyperactive, unable to concentrate, at best; violent and abusive, at worst.

The social crisis we are confronting has its roots in the inadequacies of this vital period of learning. Stressors inflicted on the mother become rooted in the personality of the child. In conditions where mothers/parents struggle to survive, or, if working, have no satisfactory solution for the care of the infant, the peak learning period is wasted, both in the home and in the basic schools, the majority of which are underfunded and under-equipped, and often function merely as a place to deposit the child during working hours.

As a result, most children enter primary school unprepared; many never catch up. This results in underperformers who ‘graduate’ from one class to the next until they leave school frustrated, demotivated, at risk, ripe for induction into gangs, and careless of their lives and the lives of others.

But here is an under-recognized fact that can turn this outcome upside down:

All children can learn to read by age six, barring abnormal health conditions. They can also be numerate to the level of simple arithmetic, and write simple sentences of their own composition, and tell a story in their own words. They can also learn to treat each other kindly, and learn a whole range of concepts and vocabulary through play.

This is not fantasy. It is a proven fact and has been demonstrated in Jamaica already, and simply needs to be replicated.

This results in a highly productive passage through the next stage of primary school (particularly if outdated learnings are stripped from the curriculum), high school and on to technical or tertiary education (more of that anon); significantly, the frustration and despair and criminal outcomes for those who sit in the back of the classroom learning nothing for years, will cease to exist.

The impact of correct care during the earlier period, from birth to two and three years old, has not yet been demonstrated in Jamaica; but one does not have to look far to see the value of it.

Finland’s system begins shortly after birth and this country is ranked highly, if not top-ranked, among the best educational systems in the world. For working mothers unable to take care of their infants themselves, infants are taken care of during the day by highly trained, well-paid and respected caregivers.

This area should be added to the Orlando Patterson Report which focused on education. The cost will be high, but compared to the increasing social and economic costs of policing, ZOSOs, community resistance, crime, and lack of productivity, the cost of infant care pales in significance to its importance.

During this early stage of development of the human brain and psyche, neglect is replaced by physical and emotional caregiving, together with correct nutrition and mental stimulation. It is then followed at age three by the form of enlightened early-childhood education alluded to above.

The only way to solve the currently seemingly insoluble social problems is to nurture a new generation, followed by further generations socialised with an enlightened start in life.

How can this ‘miracle’ be achieved so that, at the age of three, all children transition into a learning environment providing play, happy socialisation and an abundance of learning opportunities, and at age six to seven, enter primary school, reading and learning effortlessly?

How can teachers be trained to carry out this level of performance in basic schools? It has been done.

It requires the careful selection of untrained but emotionally ready candidates to work with, and be supervised in action by, highly trained and motivated teacher-trainers, using a well-known, international curriculum marginally modified to meet our budget; in addition, accepting the requirement to receive additional in-service training in each school on a weekly basis. Expensive equipment is replicated using home-made materials.

It should not be made a prerequisite, but ideally, participation in the phase of infant care can reasonably be requested from the UK as reparations; the UK could provide this in kind, not necessarily in cash, by the provision of infant care professionals for a period of at least five years, while training Jamaicans in the skills needed to replace them.

The next stages of education can be addressed once the vital first stage from birth to six years is in place. For example, by continuing to benchmark against proven examples, we can look to Germany’s acknowledged achievements in technical and vocational education and make adaptations to suit us.

Our society begs to see a reversal of the cycle of failure and crime. There is only one place to start, and that is with ensuring that the infant of today is given the environment from birth to become the self-expressed and productive citizen of tomorrow.