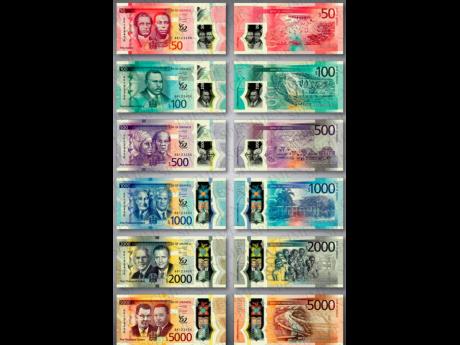 Contributed
The new series of Jamaican currency notes expected to be put into circulation this year. 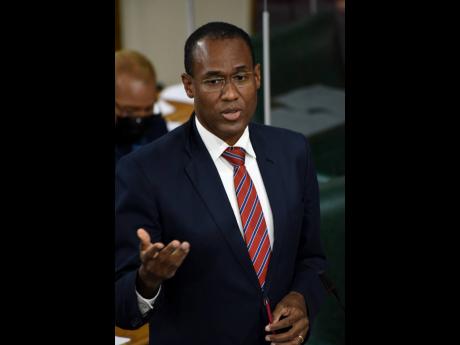 Dr Nigel Clarke, minister of finance and the public service.
1
2

“If the only tool you have is a hammer, it is tempting to treat everything as if it were a nail”

The Gleaner’s June 14 editorial sometimes argues with itself. On other occasions it creates and then attacks the proverbial straw man. And every now and then it forms conclusions without having – or addressing – all the relevant facts. However, even on these occasions, I have not had reason to doubt its sincerity.

Let me be unambiguously clear. On the matter of disclosing to the public the cost of printing of banknotes, I was – and remain – disappointed that this specific information was not available for public consumption. I fundamentally believe that data on public expenditure should be available to all Jamaicans. In the response to my recent column in The Sunday Gleaner of June 12, the editorial, therefore, argues with itself on this point.

In my capacity as minister of finance and the public service, I was instinctively uncomfortable with the non-disclosure of the banknote cost information requested for reasons of confidentiality. As such, I inquired into, and carefully reviewed, the facts and reasoning behind the Bank of Jamaica’s (BOJ) position regarding disclosure of this information, and then wrote an OpEd which outlined my views.

Having been briefed on the matter, I concluded that given the confidentiality provisions of the contract regarding the banknotes, and the exemption clauses enshrined in the Access to Information Act, the BOJ’s response to The Gleaner was not only defensible, but also justified under the circumstances.

The editorial used “the ink it buys by the drum” to launch a missile based on the conclusion of my review. That was unfortunate. It was analogous to lambasting a judge for adjudicating on a case in accordance with the facts and the applicable law. You may not like her decision but that decision does not reflect her view on the facts, except that they are facts.

A confidentiality clause exists. That is a fact. And she is duty bound to apply the applicable law to the facts. The Access to Information Act provides for exemption from public disclosure on the grounds of breach of confidence. That is the law. Conflating issues and misrepresenting the judge’s decision on a case, as her justification of the facts in the case, is distortionary and therefore problematic.

My column last week never sought to defend the existence of the confidentiality clause. Rather, I commented on the consequences of its existence. And because of the constraint the clause imposes, I provided other information and data that I thought readers would find useful.

Throughout our history of printing Jamaican banknotes, dating back to at least two decades ago, and up to and including the present time, contracts with banknote printers have always included confidentiality clauses which explicitly prohibit public dissemination of contractual terms, including pricing.

With respect to the confidentiality of pricing, therefore, this is not unusual and the BOJ is operating within firmly established and accepted historical norms across time.

In addition, the central bank has awarded banknote printing mandates to four international banknote printers over the last 10 years. This includes the period in 2012 when 40 per cent of banknotes (i.e. the $50 and $100 banknotes) were upgraded to use a new substrate and to include new security features. In all cases, across the four printers used in the last decade, the underlying contracts have had confidentiality clauses restricting public disclosure of contract terms, including pricing.

With respect to the confidentiality of pricing, therefore, there has also been consistency across printers.

With respect to the confidentiality of pricing, the BOJ is therefore operating within the framework of accepted international norms across countries.

Changing this by demanding the discontinuation of these clauses in future banknote printing contracts may not be straightforward. Jamaica simply may not have the market power to change an internationally accepted norm of the commercial banknote printing market, despite misguided views of our own self-importance.

Or we may “succeed” in removing the confidentiality clause, but at the expense of possibly losing the participation of the most competitive firms, or all, reputable, experienced, international firms.

I don’t intend to analyse why this norm exists, nor does space allow me to justify it, but I will say that banknote printing is an extremely competitive industry that involves highly sophisticated, proprietary, sensitive security technologies.

The editorial worries that others in the public sector will use the shield of confidentiality to prevent public disclosure. Well, shielding the contractual terms of banknote printing from public disclosure for several decades now has not led to widespread mimicry, and so we need not fear that now.

Besides, the concern is based on a simple world where fundamental principles do not contend with each other. That is not the real world. Globally, there are other sectors, such as defence and security, for example, where international norms provide for confidentiality of terms and conditions in public contracting even in the most transparent of countries. We do not see a misuse of these exceptions across public sectors in those countries as a result.

Even in a developed country such as England, the contractual terms of banknote printing – inclusive of price – are not publicly disclosed. Instead, a range of the “cost per note” is published which does not violate the confidentiality clause signed with printers.

We can do the same here: the cost of printing Jamaica’s banknotes over the period 2017 to 2022, inclusive of the new banknotes, has been between US five cents and US six cents per banknote.

However, to chastise the BOJ for what is a local norm with historical pedigree, as well as a practice across the industry, and a well-accepted international standard, without reference to context, is to seek to change goalposts while the game is in play.

GOALPOSTS MAY NEED TO BE SHIFTED

Times change, values evolve, and sometimes goalposts may need to be shifted. If so, let us seek to do so transparently, acknowledging the well-developed and widely accepted norms, as well as the limits of Jamaica’s influence in a world where commercial might and considerations matter.

The attempt by the editorial to now castigate a norm which has long been implemented locally – across political administrations, which prevails internationally, across respected countries and for which Jamaica’s capacity to single-handedly change is limited, and to do so without transparent and even-handed recognition and acknowledgement of these facts may ironically also serve to diminish public trust.

It does so by carelessly giving the impression of reflexive and instinctive bias by an important institution where, I have long believed, none exists. And that too has its costs. Given market share realities, the society is poorer if such perceptions become widespread. But then again, lack of awareness and acknowledgement of relevant facts often disguises itself as bias. This, unfortunately, is no less corrosive.

Taken together with my column last week, I hope that the response to concerns, combined with the provision of further information, data, and facts on the matter of banknote printing, aids public understanding.

I believe that these conversations are important. At a later date, I hope to also have the opportunity to expound on the matter of the images that will appear on new banknotes.

- Dr Nigel Clarke is minister of finance and the public service and member of parliament for St Andrew North West. Send feedback to opedjamaica@gmail.com.