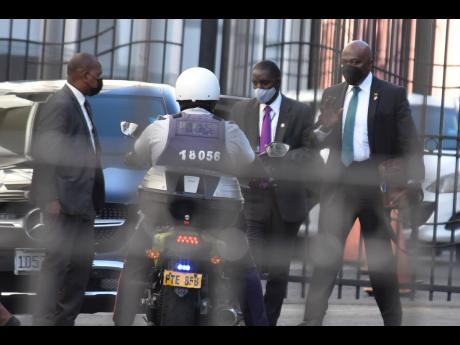 File
For what has been laid bare in Justice Bryan Sykes’ observations and rebukes during the course of the trial is not a problem of the unavailability of technology, but nothing short of investigative incompetence and a prosecutorial permissiveness.

Whatever is the final verdict in the remaining charges against the 28 alleged members of One Don/Clansman Gang still before the court for being a member of a criminal organisation and other crimes, it is clear that police and prosecutors have to take a hard look at how they do their jobs.

For what has been laid bare in Justice Bryan Sykes’ observations and rebukes during the course of the trial is not a problem of the unavailability of technology, but nothing short of investigative incompetence and a prosecutorial permissiveness, or worse, that will legitimately raise questions about the integrity of law-enforcement processes and why citizens should have faith in the system. It also represents a profound management failure, for which the culprits ought to be identified and held accountable.

The matter had additional resonance at this time, given the debate whether the police should be given greater latitude in how they are allowed to conduct investigations, including placing greater restrictions on the ability of accused persons to be granted bail.

Jamaica has a serious problem of crime and criminal violence, evidenced by the over 1,400 homicides that are committed here each year, saddling the island with one of the world’s highest murder rates of nearly 50 per 100,000. The authorities say that the vast majority of those killings are by gangs competing for turf for extortion rackets, or rivalry in lottery/sweepstakes scams, with mostly foreign victims.

One the most prominent of the island’s gangs is Clansman, which, with its rival, One Order, operates primarily in St Catherine, especially in the parish’s capital, Spanish Town, where it shakes down businesses and as well demands payments from market vendors and transport operators.

One Don is reportedly a split-off from Clansman, the result of internal rivalries. It was 33 alleged members of the One Don group who were taken before Justice Sykes’ court last year under the Criminal Justice (Suppression of Criminal Organisations) Act, for being members of a criminal organisation gang and a sweep of other offences, including several murders.

Weeks into the trial, four of the group were freed because prosecutors conceded that they could offer no evidence against them regarding murders and arson of which they were accused. Then, at the end of the prosecution’s case, a fifth man, who allegedly repaired guns for the gang, was let go on a no-case submission. It wasn’t proven that he was a member of a gang or that he was in possession of an illegal firearm, the offences with which he was charged. There was the spectacle at that point of the prosecution scrambling for the judge to allow an amendment to the indictment for the man to be charged with knowingly providing a benefit to a criminal organisation. The application was rejected.

Subsequently, several of 25 counts against the remaining 28 accused, including of murder, were dropped, although all, including the group’s reputed leader, Andre ‘Blackman’ Bryan, still face the possibility of being convicted of being members of a criminal organisation. Some, Blackman among them, also have to prove their innocence on at least two counts of murders and of arson.

Rulings like these are sometimes expected in cases, depending on the quality of the prosecution’s evidence and the skill with which it is challenged by defence attorneys to highlight factual errors or other possible interpretation of events. However, several egregious and blatant errors of investigators/prosecutors were obvious early on in the questions and observations by Justice Sykes, facilitated by the bench trial format of the case (a judge sitting without jury) which encourages more active intervention by the judge during the proceedings, rather than in a summation before a jury’s deliberation.

In at least two counts of murder for which some of the alleged gang members were charged, the police couldn’t produce photographs of the murder scenes – a compact disc with them was lost, a hard drive with them couldn’t be accounted for and neither could a log book.

Told that the prosecution was depending almost solely only on the claim of an alleged former gang member that those murders took place and their link to the accused men, Justice Sykes suggested that was tantamount to a “faith-based” acceptance to the information.

He said: “...[Y]ou are essentially saying is this, a homicide has been committed, and the police go on the scene, no records? … It can’t be that you have a homicide in Jamaica in the 21st century and no record. So if the police officer recovers these things (crime scene evidence) it has to be recorded somewhere, contemporaneous records. Doesn’t it have to be stored somewhere? They don’t have exhibit registers? So, even if you say the photographic images are lost, the computer crashed, is there not even a record from the lab to say I received those items? We know with absolute certainty that’s what the lab does, they have to have records.”

In response to the evidence in another murder to which the gang was supposedly linked, Justice Sykes said: “Some people would find that quite a remarkable state of affairs, in that, here we are in the 21st century, it is being alleged that a person is shot and killed, he is supposedly lying on the ground, the police arrive and there is (before the court) no evidence, no photographs, nobody from the scene of crime, no investigating officer, nothing to say that a body was found with gunshot wounds.”

Technological systems go bad, but, as Justice Sykes implied, there are redundancies. And police officers’ notes. Yet, there were not the only identified failures. Among the many others was that appalling breach of chain-of-custody best practices in a gun allegedly used in several crimes.

This case, no matter the final outcome, is a classic case-study of failures in investigative procedures, and, from our distance, a seeming lack of direction by prosecutors to the constabulary in case preparation. Much is broken that needs to be fixed.