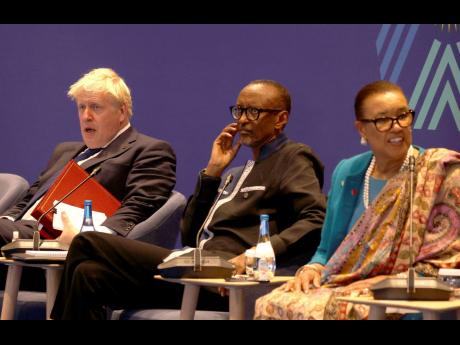 AP
From left: Britain's Prime Minister Boris Johnson, Rwanda's President Paul Kagame and Secretary-General of the Commonwealth of Nations Baroness Patricia Scotland during the Leaders' Retreat executive session on the sidelines of the 2022 Commonwealth Heads of Government meeting in Kigali, Rwanda, on Saturday, June 25.

After Kamina Johnson Smith’s failed effort to unseat Patricia Scotland to become secretary general of the Commonwealth, Jamaica can perhaps find solace in the agonising narrowness of the foreign minister’s defeat and how a few more votes might have taken her over the line. Our Government, however, should do more.

The circumstance provides an opportunity for a frank and unblinkered review of Jamaica’s formulation and conduct of foreign policy in the context of an emerging fraught global environment that has hallmarks of the old Cold War. These concerns have been exacerbated by the Russia-Ukraine war.

This assignment should be undertaken by a special commission, similar to the one, chaired by the former prime minister, Bruce Golding, that Prime Minister Andrew Holness established in 2016 to review Jamaica’s role in the Caribbean Community (CARICOM). However, its scope should include a case study, whose remit would include determining why, despite Ms Johnson Smith’s robust campaign, the support she enjoyed from some of Commonwealth’s most influential countries, the complaints of some members of the incumbent’s tenure and the confidence with which Jamaica went into the election, Ms Johnson Smith fell short of the mark. Its members should include experienced and talented retired Jamaican foreign policy hands, as well as those who work for international organisations.

If there is anything the critics might find fault in Johnson Smith’s candidature and campaign, it would not be hers, or Jamaica’s, conduct in defeat. Ms Johnson Smith and Prime Minister Holness have been gracious in their disappointment and in congratulating Baroness Scotland.

Nonetheless, if Baroness Scotland’s 27 to 24 victory can properly be characterised as indicative of a polarised assessment of her six years of stewardship as secretary general, it seems that the contest has left Jamaica with reputational issues to attend to and not allow to fester. In this regard, we note how the election result has been framed in many Commonwealth countries.

It is not merely that Ms Johnson Smith and Baroness Scotland competed and the latter prevailed. Rather, it is that the attempt by Boris Johnson, Britain’s prime minister, to unseat Baroness Scotland ran aground. ‘Boris Johnson fails to oust Lady Scotland from Commonwealth role', was how The Guardian newspaper headlined the outcome in its online edition. The Financial Times’ headline was almost identical, while The Mirror characterised the effort as a “dramatic bid” at the secretary general’s ouster. Similar themes emerged in Africa and Asia.

That, in part, reflects the perception of domestic British politics and animus seeped into, if they were not the root of concern about Baroness Scotland, a Dominica-born peer, who served in Britain’s Labour government. In this framing of the issue, Jamaica and Ms Johnson Smith are cast as proxies of Great Britain – marionettes at the end of Boris Johnson’s string.

Johnson Smith strongly rejected these claims as wrong and demeaning. No one has offered evidence to the contrary. But in diplomacy, perception often weighs heavily. It is surprising, therefore, that Johnson Smith and the Jamaican Government seemed not to have anticipated this response to her candidacy, unless they felt the mission so profoundly important that it did not matter.

Another issue highlighted by Johnson Smith’s candidacy that should be on the review commission’s agenda, is how and in what circumstances Jamaica should coordinate its foreign policy with its partners in the Caribbean Community (CARICOM). For instance, in March, Jamaica was party to CARICOM’s declaration of “overwhelming support” for Baroness Scotland. Yet, less than a month later, Johnson Smith’s candidacy was announced, apparently blindsiding CARICOM’s members, causing another foreign policy rift in the community. There are now questions of if, and how, CARICOM will coordinate on candidacies by member states and their citizens for positions and offices in global institutions.

In the post-election scenario, Jamaica might find it worthwhile to attempt to smooth any African feathers that it might have ruffled with Johnson Smith’s candidacy. Africa’s 19 members is the largest bloc of the Commonwealth’s 54 states. It was possible to win without them, but that is to presume lopsided backing in other regions.

Having already served a full four-year term, Baroness Scotland’s tenure, if the COVID-19 pandemic had not caused a postponement of a Commonwealth Summit in 2020, and assuming she was re-elected, would normally ended in 2024. Thereafter, given the Commonwealth informal system of rotation, it would be Africa’s turn to furnish the secretary general. If Johnson Smith had won, that system would have been disrupted. Her election would, in the first instance, be for four years. But she would probably serve for eight, given that, until this challenge, a second term was assumed to be automatic.

African states, given the continent’s size and regional dynamics, are usually jealous adherents to rotational rules, informal or otherwise, of international institutions. They would, therefore, probably have felt hard done by if Johnson Smith had become the secretary general, which would be seen as giving the Caribbean another hold the job for at least four years, and probably eight. Baroness Scotland, who has strong connections in Africa, signalled her intention to serve for two more years, having already had two one-year carry-on contracts since the expiry of her first term. That stance is likely to have solidified her support among the majority of African countries.

The bottom line: Minister Johnson Smith’s campaign excited strong and enthusiastic support, but, in the end, despite Jamaica’s confidence, failed to achieve victory. We should know why, and learn any lessons offered by this enterprise. Moreover, given the turmoil in international affairs, a deeper introspection on foreign policy is timely.