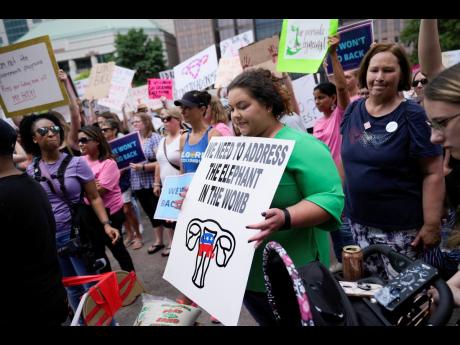 AP
Abortion rights activist Amber Stanley, from Baltimore, Ohio, holds a sign during a rally organised by the Democratic Party at the Ohio Statehouse, following the overturning of Roe v Wade by SCOTUS, on Sunday, June 26, in Columbus, Ohio.

World leaders and people who believe that women should have inherent autonomy over their bodies have reacted with outrage at the decision by the US Supreme Court that overturned Roe v Wade, a half-century-old ruling that confirmed the constitutional right of American women to terminate their pregnancies.

“Watching the removal of a woman’s fundamental right to make decisions over their own body is incredibly upsetting,” said New Zealand Prime Minister Jacinda Ardern. “People are absolutely entitled to have deeply held convictions on this issue,” she added. “But those personal beliefs should never rob another from making their own decisions.”

Britain’s Prime Minister Boris Johnson called the ruling “a big step backward”, while his Canadian counterpart, Justin Trudeau, said the decision was “horrific”, adding that “no government, politician, or man should tell a woman what she can and cannot do with her body”.

Such sentiments are indeed true and self-evident. But last week’s ruling also confirmed something equally significant about the US Supreme Court: that it is a badly flawed, ideologically riven political institution whose increasingly preordained jurisprudence is draining it of legitimacy.

Indeed, comparisons with the US system should cause the Caribbean, especially the English-speaking part of it, to jealously guard its judicial arrangements, in particular the insulation of judges, covering the region’s highest, home-grown court. It is well protected from political agenda. Indeed, some of the majority who upended Roe were chosen precisely for that purpose but lied about their intentions to mask the eventual application of a predetermined jurisprudence.

In the United States, federal judges are nominated by the country’s president but confirmed by the Senate, a process that in recent decades, has grown deeply partisan as America’s polity, especially on the right, has tended to extremes. In determining the make-up of the court, scruples are often forfeited.

There was the spectacle in 2016, when Republicans controlled the Senate, under Mitch McConnell’s leadership, refusing a hearing to Merrick Garland, President Barack Obama’s nominee for a vacant seat on the Supreme Court. Although Mr Obama still had nearly a full year left in his presidency, Mr McConnell stonewalled the appointment, supposedly on the grounds that it was an election year and voters should be allowed to weigh in on the issue.

As it turned out, Mr Obama’s Democratic party colleague, Hillary Clinton, lost the presidential election to Donald Trump, who nominated Neil Gorsuch, one of the concurring justices in the overturn of Roe v Wade. Yet, only weeks before the 2020 presidential election, Mr McConnell hurtled through the confirmation of another of Mr Trump’s nominees, Amy Coney Barrett, to cement the nine-member court’s lurch to the right, with a super majority of six conservative judges. Ms Coney Barrett supported the overturn of Roe.

During her confirmation hearings, Ms Barrett hedged on how she would rule on a question to tear up Roe v Wade but noted that the case was an important precedent and that in any ruling, she would follow all the rules relating to the treatment of precedents.

In his 2017 confirmation hearing, Justice Garland agreed that Roe v Wade had become a “super precedent” and was worthy of “treatment as precedent like any other”. He, however, stopped short of being specific on how he would rule.

Another of Mr Trump’s nominees, Brett Kavanaugh, said in 2018 confirmation hearing that the case was an “important precedent of the Supreme Court that has been reaffirmed many times”. But he, too, slithered on the specifics of a vote on the case.

However, Susan Collins, a Republican senator who supports abortion, said she felt misled by the justices, especially Justice Kavanaugh, based on what he said to her in a private meeting at the time of his nomination.

Noting that Roe had been upheld several times by the court, Justice Kavanaugh, by Ms Collins’ reporting, said: “I am a don’t-rock-the-boat kind of judge. I believe in stability and in the Team of Nine.”

Prevarications are expected in a system where judgeships are determined more by the ideological hue of the candidates rather than the intellect, scholarship, honesty, and a willingness to adhere to established jurisprudential principles.

In contrast to the politicised selection process for America’s top federal courts, the Caribbean, in how it elevates judges to the regional Caribbean Court of Justice (CCJ), the final appellate court for some countries, offers a model of how judges can be insulated from base partisan politics.

Eight of the court’s nine judges are selected by an 11-member Regional Judicial and Legal Services Commission, chaired by the chief justice, but whose other members are independently appointed by a raft of regional institutions. The court’s president, nominated by the commission, has to be agreed to by two-thirds (nine) of the countries that established the court.

The Garland episode could not happen with respect to a justice of the CCJ. Neither could politicians shop around and install judges with a specific agenda in mind. Justices of the CCJ would be expected to rule on the facts and jurisprudential antecedents of a case rather than partisan ideologies.

There is little doubt that the process for the selection of the judges and the insulation they enjoy have helped the CCJ’s emergence as a celebrated court of high-quality jurisprudence. Indeed, it would be of great merit if Jamaica acceded to the CCJ as its final court in criminal and civil matters.