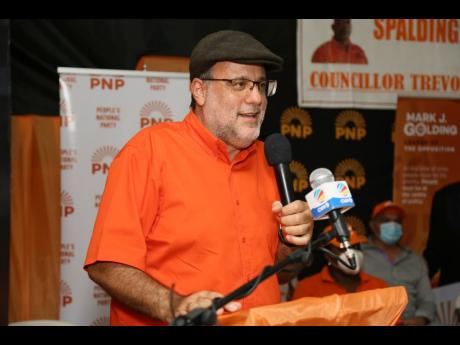 Nathaniel Stewart/Photographer
Since PNP is taking this accounting thingy so seriously, I expect it to publish a line by line accounting of how it disburses the returned funds.

Children squabbling over toys in a sandbox are only acting as expected.

But when the sandbox becomes a Parliament or public fora of national discourse, it’s time to heed the advice in 1 Corinthians 13:11:

I won’t forget the unseemly “hot-patty” nonsense over where in Gordon House George Wright should sit featuring a disgraceful public display of petulance as the unwanted MP tried to join the Opposition’s walk to the Opening of Parliament. I won’t forget the House Speaker’s intemperate order that Wright was an Opposition member.

Despite the issue screaming out for less parliamentary squabbling and more executing of parliamentary jobs (to achieve order and good government) by enacting laws for impeachment and recall, petty throwing of toys continued while awaiting their next chance to expose narrow, partisan, puerile values and attitudes.

It didn’t take long for that opportunity to raise its ugly head and for politicians of both tribes to fall to the occasion. Readers may remember that when Russia invaded Ukraine, 42 Jamaican students were stranded with limited avenues of escape. Let’s recap.

• In early February, the Government offered the students loans to fund their return home. A Foreign Affairs Ministry email included:

“Kindly be advised a loan to cover the cost of a ticket to Jamaica will be provided by Government. We would be grateful you indicate whether you would agree to such an arrangement … .”

• Fourteen students escaped without assistance. None accepted the Government’s loan offer. On February 23, Foreign Affairs published a message to the remaining 28:

“We know you must be feeling scared and uncertain about what’s happening in Ukraine, and we, like your families, are worried about you. Please know [Jamaicans] are prayerful for [peace]. We continue to reach out to offer some support and guidance … .

The Embassy will stay in contact by WhatsApp and email. Please keep your phones charged and let us know where you are and if you change location. Please also share your phone number if we only have an email address for you.

This is a very difficult time. Our prayers and thoughts are with you.”

The ministry was “worried” and sent thoughts and prayers. Whoop-di-doo!

“With the support of friends, the @JamaicaPNP has arranged Ten Thousand US Dollars to assist the students with transportation, food or other necessities. #UkraineCrisis.”

• Subsequently, PM, through his charity, Positive Jamaica Foundation, raised US$11,500. Both indicated that the funds would be routed through the Foreign Affairs Ministry to ensure coordinated efforts.

• Later in February, a Florida-based organisation, Jamaican Men of Florida, announced that it would underwrite the Government’s loan to the students or provide tickets to get them home.

• An apparently embarrassed Government backtracked and agreed to foot the repatriation bill.

The Government continued to treat the donations as being made toward “transportation, food or other necessities” and accounted for them in the Consolidated Fund as such. But Crybaby Mark accused the Government of “repaying itself” when PNP’s donation should have been redirected towards “the students’ benefit”.

Anyway, the Government pouted and returned the PNP’s donation. There seems to have been no similar complaint from any of the other donors. Now, there’s a public exchange of testy party statements accusing each other of fault in a faux crisis. The REAL crisis (repatriation) is long resolved.

Since PNP is taking this accounting thingy so seriously, I expect it to publish a line by line accounting of how it disburses the returned funds.