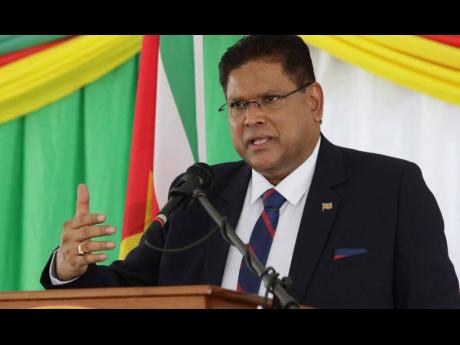 After the schedule of international meetings held this month engaging CARICOM heads and ministers, the 43rd CARICOM Heads of Government Conference will be hosted by the President of Suriname Chandrikapersad (Chan) Santokhi in Paramaribo, July 3-5. Suriname becomes chair of CARICOM on July 1.

This meeting provides an opportunity for this country, under its current leadership, to be showcased within the region. Suriname is not always in the regional news cycle. Both Guyana and Suriname have oil reserves and the focus recently has been on forging a closer relationship between both countries.

The CARICOM heads meeting is usually organised around CARICOM Day, July 4, which, as I have pointed out in previous articles, is only a public holiday in Guyana and only marginally observed in other CARICOM countries. This demonstrates the trend in CARICOM that a decision agreed by heads is still not fully implemented throughout the region.

As is the custom, newly elected CARICOM heads will address the conference. The most recently elected prime minister is Dickon Mitchell of Grenada. He became leader of the Democratic Congress Party in October 2021 and seems to be quite new to the political scene. His party won Grenada’s general election on June 23. Mitchell will be making his inaugural address along with Prime Minister Philip Davis of The Bahamas and Prime Minister Philip Pierre of Saint Lucia. CARICOM, I believe, like other parts of the world, has a crisis of leadership in a time of multiple global crises. The region needs new minds and voices. I look forward to hearing these speeches. Will these new prime ministers bring fresh perspectives and resolve?

The heads continue to have a heavy agenda before them which entails reporting on progress in the many actions emerging from the intersessional meeting held in Belize in March. With the economic impact of the COVID pandemic, climate change, and the war in Ukraine, the region is facing a grim economic situation. A presentation audited recently on the impact of the Ukraine war showed that the Caribbean is extremely vulnerable in food and energy security.

Therefore, it is expected that a major item on the agenda will be regional food and nutrition security, which Guyana has been spearheading, as the head with responsibility for agriculture. It will be recalled that Guyana’s President Mohamed Irfaan Ali presented his vision for agricultural development to the March Intersessional Conference of Heads. Guyana did host the Agri-Investment Forum and Expo: Investing in Vision 25 by 2025, May 19-20, with the focus being on reducing the regional food import bill by 25 per cent in three years.

Heads, I expect, will also assess the current state of recovery in the tourism industry. There are reported positive indications of recovery in this sector, including the return of cruise shipping, but challenges remain. The seemingly unreliable transport situation in the eastern Caribbean with the demise of LIAT is one such challenge. In addition, there are increasing travel costs and the threat of recession in principal source markets, USA, Canada and the United Kingdom.

The implementation of the CSME remains a principal item as there are heads and others now acknowledging that regional integration is critical to economic recovery and building resilience in the region. At the March intersessional meeting, heads had agreed that immediate action on CSME implementation was imperative, and endorsed the Action Plan for an Effective CSME with immediate action to be taken at the regional and national levels. They had also resuscitated the CARICOM Economic Recovery and Transformation (CERT) Working Committee. Prime Minister Mia Mottley, who has responsibility for CSME and CERT, will be expected to report to the Conference.

In my view, after all that has happened this month and in the past, I would think that CARICOM heads have another issue which should be on their agenda. This is foreign policy. CARICOM heads need to spend some time on this issue. There seems to be too much discord in the region, in spite of the fact that the Revised Treaty of Chaguaramas does not require CARICOM member states to harmonise foreign policy. The evident discord does convey the impression of a lack of cohesion within the group to the people of the region and the international community. Some guidelines need to be agreed.

I raised in a previous article the matter of a lack of trust in the region. Clearly, for stakeholders, the questions of trust and quality of leadership are issues which need to be confronted and interrogated, if the region is to move forward with action on critical decisions aimed at achieving economic recovery and transformation, and reversing the implementation deficit. There are some very serious matters to be addressed as CARICOM moves into the 50th year since its creation in 1973, and if there is to be a future beyond.