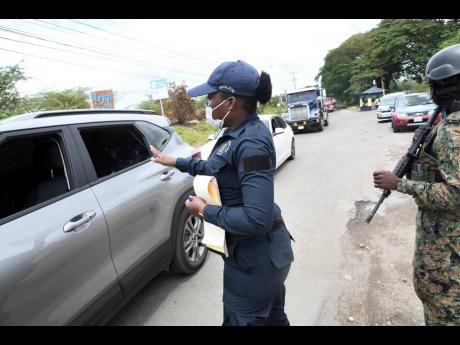 Rudolph Brown
The St Catherine SOE was the latest episode in the Government’s use of this instrument as its primary tool for combating Jamaica’s problem of crime, including gang violence.

There are three significant takeaways from the Government’s decision to allow its declaration of a state of emergency (SOE) in the parish of St Catherine to lapse at Friday’s expiry of its statutory 14-day life, rather than seeking Parliament’s approval for its extension. They have value for the Government’s future approach to formulating policy.

The first is an ‘I-told-you-so’, of sorts. For despite warnings of its likelihood, seeming hubris caused the administration to hurtle to an embarrassing and inescapable collision with logic, the law and Jamaica’s Constitution.

The St Catherine SOE was the latest episode in the Government’s use of this instrument as its primary tool for combating Jamaica’s problem of crime, including gang violence. There are, in this respect, two notable elements to the declaration of states of public emergency. One, which isn’t often broadcast loudly, is the power SOEs give to the security forces to arrest and detain people for long stretches without charge, or the need to speedily bring them before the courts. The second is the large numbers of police and soldiers who are usually deployed in the communities that are under SOEs. Their presence helps to deter criminals.

It is how the first of these powers have been used that has been subject to challenges and has caused embarrassment to the Government. In 2020 Justice Bertram Morrison, in a habeas corpus case involving five men who were locked up for several months under states of emergency, held that their detention was unconstitutional. The infringement of the men’s rights, the judge ruled, wasn’t shown to be demonstrably justified in a free and democratic society, as required by the Constitution when guaranteed rights are abrogated. Given to the security minister, under the emergency regulations, to issue detention orders, infringed the constitutional separation of powers between the judiciary and the executive.

The Government is appealing Justice Morrison’s rulings, apparently on substance and procedural grounds. Yet, for a long time, the administration suggested that it was refraining new SOEs until the Court of Appeal ruled on its appeal. It did, however, declare one in December, which collapsed when the political opposition didn’t support its continuation after the initial period. Then a fortnight ago it announced the one for St Catherine, with minor adjustments to the old regulations with respect to people being detained.

That might have otherwise been acceptable. However, it was widely known before the event that three hours after the announcement of the St Catherine SOE the Full Court – where three judges preside – would deliver its judgment in Roshane Clarke’s case, in which he challenged the constitutionality of the seven-month detention under an SOE. He won! There were the same questions of what was demonstrably justified in a free and democratic society when people’s constitutional rights are abridged. Essentially, the ruling was that the emergency power regulations under which he was held were too vague and imprecise. Almost anyone could be swept up and detained under the SOEs.

Last week, Horace Chang, the national security minister, told the Parliament that the Government would allow the St Catherine emergency to lapse, because “more time is required to do a thorough review of the emergency powers regulations to ensure that they are in keeping with the Constitution”.

In several respects, Justice Morrison’s ruling – notwithstanding the challenges to his authority to make substantial constitutional rulings in a habeas corpus matter – was more fulsome than the more narrowly argued decision of the Full Court. We are surprised that his arguments appear not to have been subject to deeper analysis, or given greater attention to in the subsequent regulations – until the corroboration of the Full Court.

There are important lessons to be learnt from these developments, not least of which is that hubris doesn’t make good policy. Which informs the episodes potentially redeeming second takeaway.

Dr Chang reported in Parliament that the Government has consulted with the Opposition on the issue and that “both sides of the aisle are practically agreed on the changes to be made” to the emergency powers regulations.

The Government and the Opposition have had sharp philosophical differences of how states of emergency should be used, including over whether their potential sweeping powers ought to be called upon as a crime-fighting tool. The Government’s position, essentially, is that the scale of Jamaica’s crime problem propels it to an emergency that, for a time at least, requires an extraordinary response.

These philosophical differences, notwithstanding, this newspaper believes that crime is among the issues that ought to be above extreme partisan fray. That the administration is engaging the Opposition on the matters, as noted by Dr Chang, is therefore significant. It should have happened earlier. It should continue – and widened to include a wide range of stakeholders, that will hopefully breathe new life in limping anti-crime consensus between the Government, the Opposition and civil society institutions. Dialogue need not be the result only of crisis.

Third, Dr Chang said that no one was detained under the emergency regulations that accompanied the St Catherine SOE. Yet, in a little more than a week, he was able to report that the security forces had brought St Catherine “under some level of control”. What made the difference? The minister didn’t say. He, however, said that “the security forces have pledged to use whatever current tools they have and to make strategic deployments to maintain the status quo”. We hope that they continue to be successful.

In the past, when SOEs collapsed, police and soldiers were, almost immediately, and without explanation, withdrawn from the communities, although it doesn’t require any special powers for the police commissioner or the chief of defence to concentrate police or soldiers in any area. A light bulb, perhaps, went on somewhere.