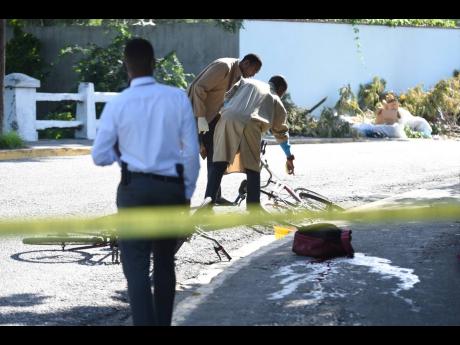 File
Perpetrators of violence are products of our uncaring society; the society that left them behind, left them to fend for themselves and develop their coping skills and morals, suitable to their living hell.

With all that is going on in the world today, and particularly in my homeland, Jamaica, I find that I have developed a strong desire to visit my dream world when I sleep. I have begun experiencing more detailed dreams, to the point where I am reluctant to wake up to this world. Things are so bad that I regularly dream that I am asleep and dreaming, which is a dream within a dream. That is two levels down in dreamland. It appears that my mind will do anything to escape the terrible nightmare that this (real) world has become.

While I am asleep, I experience nightmares only very rarely, and I am able to will myself awake whenever they begin, or if I am unable to control them.

However, the nightmares in the real world are beyond my control and, although I wish that I could, it is impossible to wake up from them. It is sad that there are many people who must live up close and personal with real-world nightmares every single day of their lives, and they are unable to escape them.

Although dreams are “… a series of thoughts, images, and sensations occurring in a person’s mind during sleep”, they are also, “cherished aspirations, ambitions, or ideals”. Many of us dream of (wish for) a better Jamaica, a country where there is love for one another, safety, harmony, no poverty, no hunger, no homelessness, peace, prosperity, and respect for others. We even daydream of the smiling faces of the helpful people that we may encounter on our day-to-day journeys. We fantasise about being able to go anywhere without fear, and of kindness and happiness everywhere.

But the stark reality of modern-day life paints an entirely different picture. It is a picture that we see all too often on our social media posts, in the newspapers, on the television, and hear about over the radio. When we open our eyes to the real world, we are bombarded by disrespect, impatience, aggression, hate, violence, thievery, fraud, rape, and killings every day. We recoil, but there is no escaping the awful nightmarish reality in which we live.

Unlike the nightmares (frightening or unpleasant dreams) that we might encounter while sleeping, real-life horrors represent scary, unpleasant, life-and-death experiences. An increasing number of our brothers and sisters, children and elderly citizens have no way of avoiding the nightmares that their lives have become. The lack of amenities; the lack of love and respect; the lack of a good nutrition, education or a skill (tools for surviving); the lack of care from their households, communities and government; hate, disenfranchisement, abuse of all sorts; violence, and murder permeate their consciousness, warp their perceptions, and contort their ideas of good and bad, wrong and right, justice and injustice.

When children grow up experiencing real-life nightmares every single day, some become real-life monsters. To those of us who were fortunate enough to have a good upbringing, the people who carry out atrocious crimes are barbaric animals, and less than human. Most of us will be scared, appalled, distressed and disgusted by the heinous acts of violence that they commit. But the perpetrators of violence are products of our uncaring society; the society that left them behind, left them to fend for themselves and develop their coping skills and morals, suitable to their living hell.

In their hellish world, the solution for interpersonal or intergang disagreements, disputes and problems in general is to eliminate (kill) the source or sources of the problem. In the world that our society created for them, sometimes the solution lies in sending a message or messages by killing someone close to the problem, or killing someone from the area that the problem lives in or frequents.

I vividly recall a young man who lived within a community that was ‘at war’ with a neighbouring community. He was not involved in the conflict, but he shopped in the downtown market. A group of young men from the rival community spotted him shopping and recognised him as a resident of the other community. They accosted him, accused him of coming from the rival community, put a gun to his head and pulled the trigger. The warhead blasted its way in one side of his head, and out the other; in doing so, the bullet blew out both eyes and caused so much brain damage that, although he was listed as [only] being ‘shot and injured’ (a very deceptive term that sometimes belies the poor quality of life that the victim is left with), he was a vegetable from that day forward.

Unless and until we ensure that no one grows up in and lives in a nightmarish environment, the nightmare that they (in turn) produce will never end for our society. Until love, respect, food, clothes, safety, education, employment, and achievement are no longer only far-fetched dreams for them, we will continue to experience the hell that the monsters that we create unleash upon the wider society.

To those of us who believe that oppressive and suppressive security measures are the main solution to our crime problem; to those who dream of a time when criminality will spontaneously subside without significant social reform, and that we will have a disciplined, prosperous, safe and secure Jamaica – dream on.